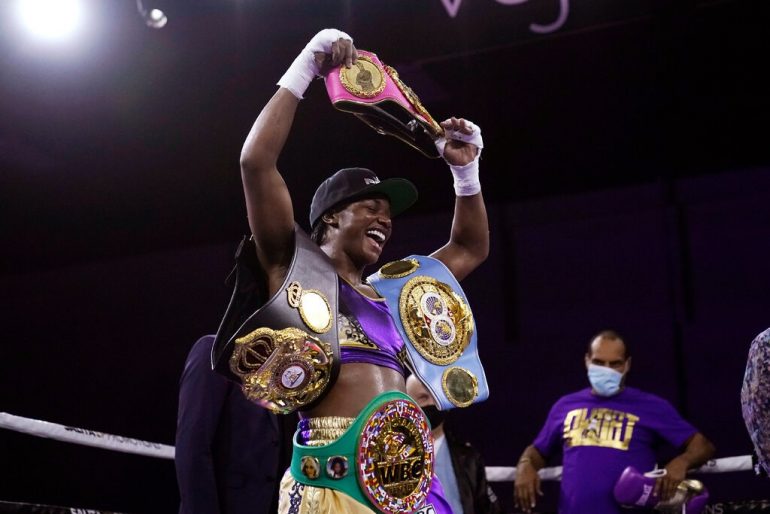 The most decorated female fighter of all time just added a jewel to her crown – but fell short of her goal to regain the pound-for-pound throne.

In another stellar performance, two-time Olympic gold medalist and Ring middleweight champion Claressa Shields defeated Canada’s Marie Eve Dicaire in a bout this past Friday, February 5, lifting her IBF junior middleweight belt to add it to her other three trinkets, and thus becoming the first-ever two-time four-belt unified champion, male or female. And she did it in impressive fashion, adding another previously unbeaten victim to her record with a dominant job from start to finish, only marred by Dicaire’s survival tactics throughout the bout.

Since Shields was the No.1 rated junior middleweight in the world according to The Ring, her victory over Dicaire (No. 2) also earned her the coveted Ring magazine belt in a second division.

She did not, however, regain her position as the world’s best pound-for-pound female fighter. In a close vote by The Ring’s Women’s Ratings Panel, the current queen Katie Taylor held on to her No. 1 position.

The vote count did not reflect the razor-thin difference between both fighters, according to the panelists.

Although most voters agree that Taylor’s extraordinary performance against Miriam Gutierrez and (especially) Delfine Persoon in her last two bouts were hard to surpass, most also agreed that Shields is at least just as great at Taylor, lacking only the kind of top-notch challenge that the Irish lightweight champ has enjoyed.

“(Taylor) has fought the best opposition (two Top-10 P4P fighters),” said Michel Montero, in justifying his vote. “Shields is yet to face a P4P-level fighter. That’s not her fault, it’s just the reality of the situation.”

Although the majority of the panel agreed with this line of thought, the voices of dissent were also present.

“Shields made an undefeated world champion look like a novice amateur,” said Mark Jones, in his explanation of the vote in which he proposed to promote Shields back to No. 1 in the mythical pound-for-pound ranking. “Dicaire gave a masterclass in holding on for dear life, lacing the eyes, and elbowing to take Shields out of her game, but it didn’t work.”

In either case, the panel seemed to agree on the fact that Shields will undoubtedly regain her stature as the game’s best once she finds an opponent that brings out the best in her. And in many minds (including Shields’), that opponent already has a name.

“Shields, under (trainer) John David Jackson, has evolved from a volume puncher to a fighter that can seamlessly change fighting styles as long as she’s moving forward,” said Jones. “To defeat her, you must back her up, and the only fighter from 154-168 that can do that is Savannah Marshall – and possibly Elin Cederroos.”

Being the only fighter to ever defeat Shields in her amateur career, Marshall has been in the American’s crosshairs for as long as we can remember. And should that fight happen, the consensus is that we will get the kind of fireworks that could bring Shields back to the top of the pound-for-pound list – and seal a first-ballot Hall of Fame career forever.

“I’d still like to see her in a match where the opponent really presents her with a challenge, similar to what happened to her with (Christina) Hammer,” said Yesica Palmetta, echoing the sentiments of many, both in The Ring’s panel and in boxing in general.

If we ever get that fight (and we will) and Shields comes through with another impressive win, just like the one against Dicaire, her status as the “GWOAT” will be almost impossible to deny.

Even in defeat, Marie Eve Dicaire managed to hold on to her top position in the division, becoming now the No. 1 fighter at The Ring’s junior middleweight rankings and bumping everyone else one notch above their previous positions.

That situation left an opening at No. 5, which was given to Sweden’s Patricia Berghult in an almost unanimous vote by the panel.

Elsewhere, Estelle Mossely’s win over Verena Kaiser was also submitted for consideration by the panel for an eventual promotion at 135-pounds, where she is listed as No. 3, but the extraordinary quality of the top two fighters above her (Delfine Persoon and Terri Harper) made it impossible for her to make further progress for now.