Yeleussinov could be next for David Avanesyan after Josh Kelly victory 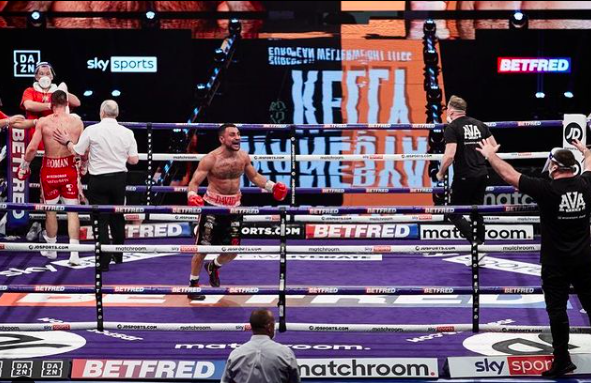 There will be no resting on the laurels for red-hot Russian David Avanesyan following his huge recent win over Josh Kelly.

European welterweight champion Avanesyan is home for awhile but trainer Carl Greaves expects him to return before too long as he needs to have the third and final fight on his Matchroom contract.

Greaves is hoping things will be bigger and even better next time, with the oft-postponed Kelly clash now in the rear-view mirror.

“I think he deserves at least a final eliminator for a world title if not a straight crack at the world title,” said Greaves of his charge. “He’s 32-years-old, he’s getting better with age, he’s fighting the best he’s ever boxed, he’s had four stoppages all back-to-back and he hasn’t gone beyond nine rounds in those so I think he deserves it.”

There’s speculation that 10-0 Kazakh Daniyar Yeleussinov could be next. He defeated Kelly on his way to gold at the 2016 Rio Olympics but Greaves admitted, “It needs to be for something big.”

Greaves has noticed significant changes in his fighter, who has learned from his experiences over the years on the road. Going in to the Feb. 20 Kelly fight, Carl thought Avanesyan brought too much to the table for the Englishman. 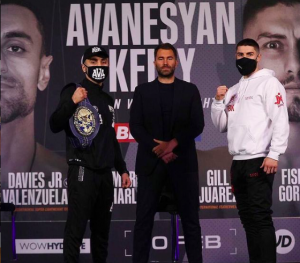 Plenty of folks coming in underrated the heart and guts factor in the Avanesyan-Kelly contest. The Russian is not one to be deterred, and the trainer knew he’d make Kelly work harder than he’d like to.

“I was always very confident,” he said. “David is a different level fighter to the one he was a few years ago when he fought Kavaliauskas and [Lamont] Peterson. He’s become a different person through those fights and he’s learned so much about himself. Then, in Bilbao against Lejarraga in front of 12,000 people, lion’s den, more than that, it was very hostile, to come in and out of that victorious is a massive thing and that did David the world of good as well.”

Factor in hauling the curtain down on Shane Mosley’s decorated career and Avanesyan has learned plenty over the years. Greaves has noted the physical and psychological improvements, which is why he was convinced his man would beat Kelly.

“It’s remarkable really, how what I said came true,” said a modest Greaves, a decent former pro. “I’ve never studied an opponent as much as that in all my life because it was over two years in the making and I knew it was always going to happen, it was just a matter of when and in his [Kelly’s] last three fights I found quite a lot out about him to be fair – and it went exactly how I expected it to. I knew exactly how Kelly was very, very good and he fights in bursts. I always thought to myself that once he’s had his bursts he wants to go away and have a rest but if you get an opponent who can keep on him, keep making him work, I think you’ll get to him, and that’s exactly how it went.” Here is how RING saw the fight.

Was Avanesyan just as studious in his research?

“He left it to me but he did watch a couple of his fights and I think he knew what I was saying because when we were watching them together I was saying to David, ‘This is what he’s doing, he’s doing his work and then he’s wanting to rest,’” recalled Greaves. 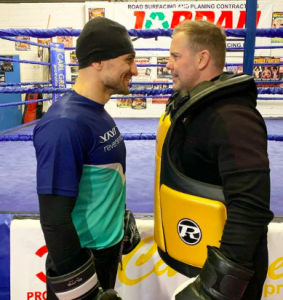 Fighter Avanesyan and trainer Greaves (right) see eye to eye, and are in sync as a duo.

“And I said, ‘While he’s wanting to rest, you’ve got to be on him and the way to beat him is to push him back, get him on his back foot, don’t let him come forward’ and I think once Kelly started tiring he started sitting on David and trying to push him back – but that was his undoing. He was better trying to keep it long with David but he started to walk David in, he got close which is where David is most effective with his short work and his bodyshots and that was the undoing of Kelly, really. That was the start of the finish.”

So how was Greaves so sure that his fighter would have Kelly’s number? Kelly is a precocious talent, a decorated amateur who has progressed quickly with Adam Booth in his corner. Greaves just thought his 27-3-1 guy knew and had too much.

“I just have seen it time and time again, those sort of lads in sparring with David, and we’ve had top quality lads in, I’ve seen those sorts of opponents be able to do it for two or three rounds with David but he always seems to find a way,” Greaves explained. “If you can’t keep him off and hurt him, then he will break you and he will find a way. Kelly hit David with a cracking left hook in the second round, I think it looked a lot better shot than it was, speaking to David he said it didn’t really hurt him and it was more of a balance thing. But when you look at it closely when he went in to finish David he walked on to a cracking right hand which steadied him a bit and made him hold. I think that broke Kelly’s heart a bit.”

And in the sixth round Avanesyan kept grinding and Kelly wilted. A very personal build-up had been settled.

“It was one of those fights where there was a lot of pressure, a lot of build-up, we were in a bubble with the pandemic and with what has gone off over the years [between both camps], it was very satisfying,” Greaves admitted. “I’m not going to lie. It would have been hard if we’d lost that fight. It would have knocked me sick, so I can imagine what Adam’s feeling because one of us had to lose.”

Kelly is 26 and has had just 12 fights. Greaves thinks he can come again.

“It’s a big rebuilding process,” added the trainer. “I think he needs to go up to 154, he might be losing a lot of power and strength at welterweight. He’s a big, big kid. David got in the ring at about 11.8 so he’s put on just over a stone on. Kelly looked a size or two bigger, he’s got big legs so I’d say he was in the 12 stone bracket and that’s a lot of weight to put on overnight. He might be a better fighter [moving up], be more durable, hit harder and not losing much strength. He’s very talented. If he could sustain what he did with David for those two or three rounds he’d be the Mayweather of Britain, he’s very talented and very good, but he’s got to be able to sustain it. There are questions to be answered. Is he going to be able to cut it as a pro? Is he going to be one of these fantastic amateurs who can’t make it as a top-level pro? I don’t know.”