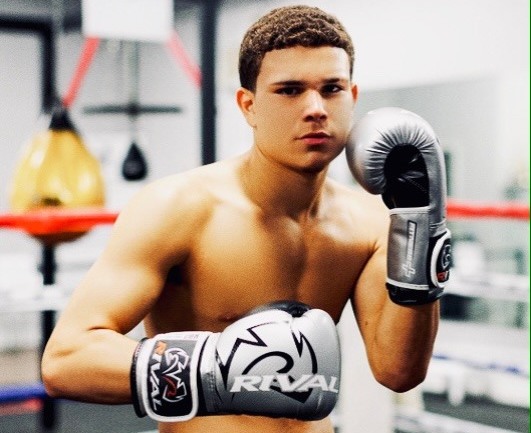 “Legacy” is more than just a powerful nickname for Armani Almestica. It’s a big part of what keeps the 19-year-old focused on a solitary goal. It’s what motivates him to get up early to log miles of roadwork, and to train up to six hours a day at the Higher Power Boxing Academy in Orlando, Fla.

In many ways, Almestica has already compiled an impressive resume’, consisting of 21 national titles in an amateur career that began when he was ten years old. He’s also 1-0 (1 knockout) as a professional, and will look to make it 2-0 this Saturday, February 27 when he faces an opponent to be named in a four round lightweight bout at the Caribe Royale Orlando.

In many ways, he’s surpassed how far his father and trainer, Freddy Almestica, had gotten in the sport. The elder Almestica had been a talented boxer in his own right, putting in work around the gyms in New York City throughout the ‘90s, and was even signed to a pro contract with the late Jimmy Glenn. He never made it to the ring for his first pro fight however, as legal problems derailed his own career. His grandfather had also boxed, but didn’t get to pursue it as a career, either.

“That’s why they call me ‘The Legacy,’ so I can finish what he couldn’t finish,” said Almestica. Though Almestica has yet to be signed by a manager or promoter, he’s already building buzz in the pro scene. Pat Lynch, the New Jersey-based manager who took a young Arturo Gatti to the rock ’n roll heights of boxing, as well as Top Rank Vice President Carl Moretti will be at ringside to get a closer look at Almestica.

Almestica has the opportunity to garner even more attention from industry heavy hitters as part of the Puerto Rico Olympic squad for the 2021 Olympics in Tokyo. Immediately after Saturday’s fight, Almestica and his teammates will board a flight to compete at the “Boxam” International Tournament in Castellón, Spain from March 1-7. It’s the latest stop for him in a nearly two-year journey with the Puerto Rico team, and will serve as a tuneup ahead of the Pan American boxing qualifiers, which are set for May 6-13 in Buenos Aires, Argentina.

Almestica, whose father hails from Guayama and mother is from Juncos on Puerto Rico, took a circuitous road to the national team. He had been on track to make it to the United States team, having won the National Junior Olympics in 2017 and Youth National Championships in 2018, before taking the National Golden Gloves title in his division the same year. He had been part of USA Boxing’s youth team, winning a bronze at the 2019 Emil Jechev Memorial Tournament in Bulgaria. 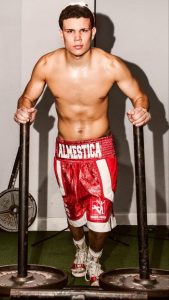 But his Olympic dream nearly ended in 2019 when he was among three people arrested and charged in a vehicle theft incident. The charges were eventually dropped, but by the time Almestica was released he would only have two weeks to prepare for the U.S. Olympic trials in December of that year.

Alternatively, he’d have about a month to compete for a spot on the Puerto Rico team. Almestica chose the latter.

“I said hell yeah, my people are from there, my bloodline,” said Almestica. “First I had to qualify to go on to the youth team, and they had the elite trials and I won. I think I fought four days, the first three with headgear and the last day with no headgear.”

Now he finds himself on a team that pro champions like Miguel Cotto and Ivan Calderon had used as a springboard to future success.

“Armani is focused. You can see it in his eyes when he walks in the gym,” said Christina Cruz, the women’s flyweight representative on the Puerto Rico team. “He’ll kindly say hello to everyone and then right to work he goes.”

Almestica is used to making the best out of a bad situation.

As a child growing up in Orlando, Almestica had initially been interested in football. His father, who had done some prison time, had come back into his life to care for him after his mother began struggling with drugs. There were nights that Almestica had spent sleeping on dirty mattresses in the streets with his mom, and the crowds he hung around exposed him to detrimental behaviors.

“If he didn’t take me out it would have been prison for me or death,” said Almestica. “The stuff that I was doing at a young age was catching up to me.”

The elder Almestica said he would support his dream to play football, but couldn’t train him since he didn’t know much about the gridiron game. But he did know boxing, and could show him the intricacies of the sweet science. The 7-year-old jumped at the opportunity.

“He signed me up for a fight here in Orlando and I won. Ever since then I was motivated, I’d tell my dad take me to the gym, and ever since then we’ve kept it rocking,” said Almestica. “We had so many ups and downs but we still kept through it. Boxing opened so many doors for me, but my dad is the one who really built me up from scratch.”

Money was always tight, and sometimes they’d only have enough money for one plane ticket for Armani to fly to national tournaments, meaning he’d have to get on a plane, find his way to the venue, and then work with a trainer who was in town. Even more extreme were the times both Almesticas would fly to tournaments together, without any money for a return ticket. Losing was not an option.

“God works in mysterious ways in my life,” explained Almestica, who remembers sleeping outdoors in a tent before one tournament.

“The money would come out of nowhere. We would get a phone call from somebody at the tournament who has been watching us, because we used to win tournaments back to back, and would be like, ‘We’ll help you with your ticket to get back.’” 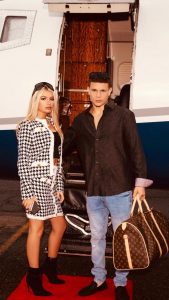 As Almestica’s boxing career caught on, life’s difficulties continued to rack up. Freddy Almestica found himself back in trouble with the law, and Armani’s mother was still not in a position to care for him. Faced with the possibility of being placed in foster care, fate intervened once again.

Peter Gonzalez met the young prodigy through his oldest son, who was Armani’s best friend and training partner. Rather than allow Almestica to become a ward of the state, Gonzalez took matters into his own hands.

“That’s when I stood up and took custody of him,” said Gonzalez, the owner of Higher Power Boxing Academy, who also works his corner alongside assistant coach and cutman Jesus Ortiz.

“I’m a Christian person and just something told me that was the right thing to do for him.”

Gonzalez sees pro success for Almestica, saying he can win a world championship within his first 14 fights. “His timing, that he’s a southpaw, and he’s just swift and savvy,” said Gonzalez. That belief was further bolstered by what Armani showed in the gym, when he got to spar with then-WBA welterweight titleholder Keith Thurman for his July 2019 pay-per-view fight with Manny Pacquiao. Almestica had turned 18 just the month prior, but his precocious ability earned the respect of the world champion at his St. Petersburg gym.

“When Armani got in there he gave him such good work that Thurman came with two others and said, ‘Can you show me how you did that to me?’ Because Armani hit him and then pivoted to the side and caught him and punched him two times in the face and Thurman didn’t even see it,” remembered Gonzalez.

Almestica has also gotten plenty of experience in the gym through sparring with pros like Robeisy Ramirez, Peter Quillin, Erickson Lubin, Josue Vargas and Antonio Vargas.

When the Olympics were postponed due to the Covid-19 pandemic, Almestica decided to begin his pro career already. Almestica made short work of Kristopher Berberich, scoring a second round knockout of the mixed martial arts fighter turned boxer. Almestica showed plenty of polish, using his right jab and a dedicated body attack to score three knockdowns with his straight left for the stoppage win.

Positive influences have been key to Almestica’s success. Almestica’s girlfriend, model, actress and pop singer Angelica Caruso, helps give him a perspective of the bigger picture in life, while her parents, Mark and Lisa Caruso, whom he already considers his in-laws, remind him to stay focused on his goals.

“It does push me because I see that she’s already somebody,” said Almestica of the “Rich Girl Mentality” singer from New Jersey. “That makes me just want to push more.”

Nothing reminds Almestica of how much more he has to achieve than visiting his family. Tears come to his eyes when he sees the poverty that his mother and grandmother still live in. He’s rebuilt his relationship with his mother, and can reminisce with her on how far they’ve come in life together. Giving his family the best life he can is a major part of the “legacy” he’s trying to build with his boxing career.

“My goal is when I help earn a house for everybody, my mom, my grandma, my little brothers in a mansion,” said Almestica. “Everybody with a smile on their face. That’s when I can say, ‘Damn, I made it.’”