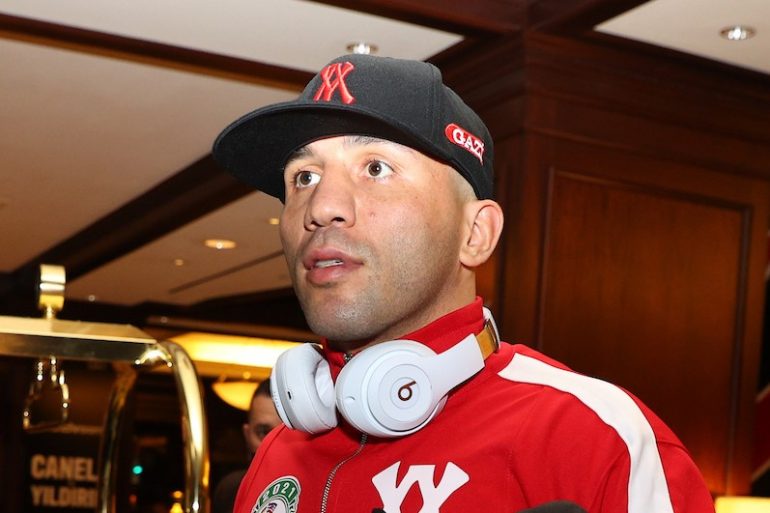 Mexican superstar Canelo Alvarez will return to action just 71 days on from a near-flawless win over Callum Smith when he meets unheralded WBC mandatory challenger Avni Yildirim at the Hard Rock Stadium in Miami, Florida, on Saturday.

Fans and media unanimously expect Alvarez, who is a 1-50 betting favorite to retain The Ring Magazine, WBA and WBC super middleweight titles in emphatic fashion. However, Yildirim maintains that he’s ready to make the most of his big opportunity.

“It’s a big fight for me and for my country,” said the Turkish national through trainer Joel Diaz from their training base in Southern California. “I want to be a champion, a star, it’s a big chance for me. We are ready for war.”

The 29-year-old, who was previously featured as a subject in our New Faces series, is low-key in his assessment of the fight and prefers to let his fists do the talking.

“I don’t like too much drama, too much talking before the fight. I’m getting ready, we’re in good condition, we’re training twice a day; in the morning and the afternoon. I’m just getting ready for the date.”

Diaz, who was a lightweight contender in the 1990s and later received acclaim as the trainer of former two-weight world titleholder Tim Bradley, travelled to Turkey to train Yildirim, while they patiently waited for the fighter to receive a visa.

“It was supposed to [take] 10 days but it ended up being three weeks,” explained Diaz. “He got his visa on Thursday (February 11th) and we flew to Los Angeles the following day.”

Diaz insists that his fighter is capable of putting up a solid challenge.

“His fight with Canelo, it’s a good fight,” said Diaz. “He’s the [WBC] mandatory challenger for the title. He’s a fighter that is physically strong, he has the will and a strong mentality. He fights for his country. He’s been sparring and training good. We’re looking forward to a good fight.”

“You never know, every man has a chance. We know Canelo is [the] pound-for-pound [No. 1], but Avni is also a great fighter with a lot of potential. Anything can happen. Nobody gave Andy Ruiz Jr. a chance against Anthony Joshua and he beat him. You can never count a man out regardless of his previous performances. Any man who can get in the ring and swing and throw punches definitely has a chance.”

Alvarez has shared the ring with a who’s who of fighters from the past decade and boasts notable wins over Shane Mosley (UD 12), Austin Trout (UD 12), Erislandy Lara (SD 12), Miguel Cotto (UD 12), Gennadiy Golovkin (MD 12), Daniel Jacobs (UD 12), Sergey Kovalev (KO 11) and Callum Smith (UD 12). At 30, Canelo (54-1-2, 36 KOs) is at his athletic peak and is already a modern day great, having held world titles at junior middleweight, middleweight, super middleweight and light heavyweight.