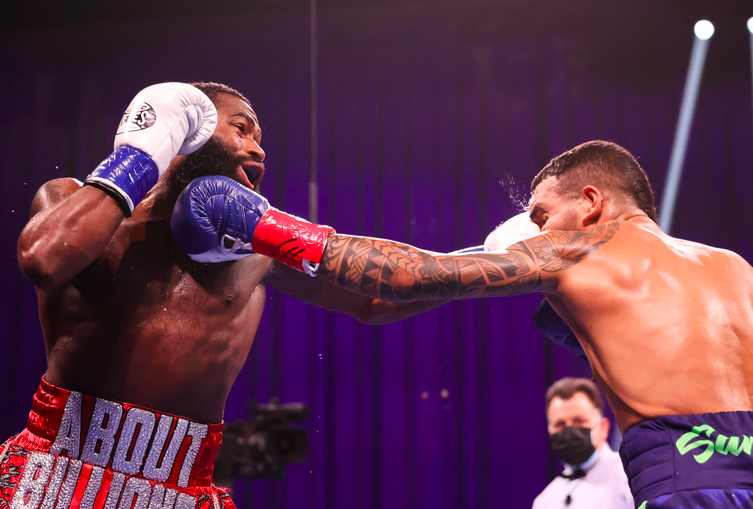 How many times have we all heard from Adrien Broner that this time is different, he’s seen the light and he’s smartened up? Too many to count…and that’s why smart fans and pundits wanted to verify before they trusted Broner’s latest plea for a second chance.

“The Problem” said that he ditched the party boy life-style, and he gave up drinking, and he wanted to make a hard run at a fifth title. He’d show us how dialed in he was on Saturday night against Jovanie Santiago, after a two year layoff, he stated, and so we tuned in, to see for ourselves.

That’s the thing about Broner, he’d not won a fight since 2017, and we see him in the news for missteps which draw attention of law enforcement, but we still pay attention, we still tune in to see how he performs…or doesn’t.

At Mohegan Sun in Connecticut on Saturday night, the 31 year old Broner was not his old self. Foe Santiago didn’t look at all out of place and there was no clear talent differential on display overall. The fight went the distance and yes, drama was in the air. How would the arbiters see it? For Broner, it turns out, by scores of 115-112 (Glenn Feldman), 116-111 (Tom Carusone), 117-110 (Peter Hary). 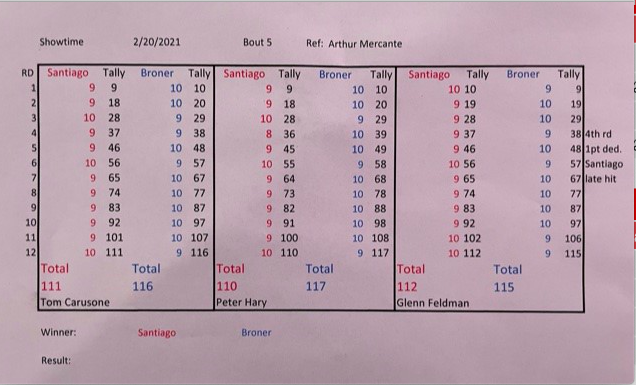 No, he didn’t deserve those wide scores, Santiago deserved better marks than that. The A side, the drawing card, got all the benefits of the doubt. That Hary card, in particular, stands out as being ripe for inspection.

AB spoke to Brian Custer after. He said he thought he won, and that the jab did it for him. He didn’t warm up much before, so it took him awhile to get loose, he explained. He knew Santiago would be tough, because he was unbeaten. “They gonna fight like a bum fighting’ for a sandwich,” he said, of such a creature.

AB told Custer that he heard Steve Farhood had him losing, and complained that’s why he doesn’t like Farhood. He prefers Custer, he told viewers. But, Custer said, Twitter said that Santiago won, in a poll. “If you look at my Twitter, 98 percent of them don’t like me. So fuck Twitter and fuck Steve Farhood,” Broner said.

So, what might he change, will he look to throw more? “I’m a change my drawers and throw on some more boxers, because my boxers is sweaty,” he said in response.

He kept going. He asked Al Haymon and Stephen Espinoza to keep him busy. 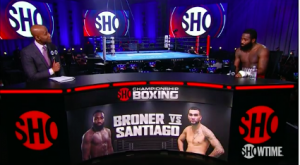 “Keep me in the ring,” he said. It sucked having $13 to his name coming in, but if they keep him busy, then maybe he will stop getting in trouble with the law, he shared.

And what about that ‘new AB?’

“I ain’t gonna lie,” Broner said, “for the rest of the weekend, we gonna pop bottles, cash checks and have sex, but, on Monday it’s back to kicking’ ass and hittin’ bags, though. Real talk.”

He’s hoping next time he fights, COVID will be over. Fighting in the bubble, it cramps his style. “I felt like I was in jail again,” he told Custer.

Santiago spoke to Custer after the loss. He said he wasn’t surprised Broner got the nod. “The decision could have gone both ways,” he said. “No, the decision doesn’t surprise me. Broner did a nice job in there. He fought a great fight. We were in it to win this fight and he got the decision. I think boxing fans know who I am now, but in this fight I should have applied more pressure and the fight would have gone my way. I need to talk to my management team and see what’s next for me. But the performance today says a lot about me.”

Santiago (145 1/4 on Friday, from Bayamon, Puerto Rico), entered with a 14-0-1 mark and a status as an unknown to all but hardcore PR fight fans. He insisted during fight week that Team Broner had made the wrong call in choosing him to look good against. His career best win came against Chop Chop Corley, who was 48-27-1 in 2017 when they met.

In the first, Broner (34-4-1), last seen in a ring on Jan. 19, 2019 losing to Manny Pacquiao in sadly decisive fashion, didn’t start out fast. People by now know that he’s not one to pull the trigger haphazardly, at all. Same deal in the first, Broner stared at his foe, kept his guard up, concentrated on defense. 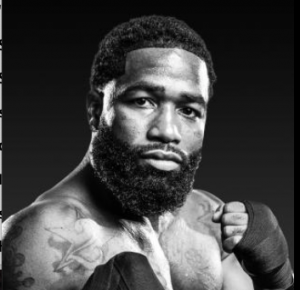 Broner came on late, and perked up, upping his volume. But no, he didn’t look like the old AB.

In round two, Santiago feinted, worked a jab to the torso, and he showed better hand speed than I expected. He wanted to land a lead left hook. He didn’t but he didn’t look out of place, at least.

In the third, Broner got a little busier, but then he reverted to form, posing more than hurling. Santiago backed Broner into the ropes, looked to clang to the body, and he was getting warmed up and more confident.

“Keep busting him up with the jab,” said trainer Mike Stafford after the round to AB. Raul Torres told Santiago, “You won that one,” after the session. “Let’s keep working the body,” Torres told him as the fourth was about to begin.

Ref Arthur Mercante took a point from Santiago for throwing after the bell rang to end the fourth, and Artie started getting pissed, telling them he wouldn’t take any shit.

Al Bernstein, the analyst, didn’t agree with the ref’s call.

In the fifth, Santiago again looked to be in the same league with Broner. AB didn’t look to have the faster hands, or such fluidity in his combos that you’d marvel at him. Stafford asked for the hook after the round, and recommended that AB not get drawn into any chippiness.

In round six, Santiago fought with the degree of confidence that had been growing. Broner got busy in the last 30 seconds, but he probably didn’t steal the round. Once again, the Puerto Rican boxer was the busier. He hurled 82 shots, according to CompuBox, and you’d guess the judges would reward the volume. 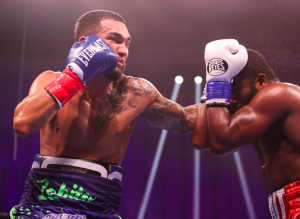 Santiago has a skill set, this wasn’t a stumble-bum they brought in to make Broner look marvelous.

In round seven, the right uppercut from AB was working. A clipping hook from AB landed clean, and he was just a bit busier. But his punches lacked sharpness.

In the eighth round, AB was opening up. A check left hook landed and did Santiago’s glove touch the canvas? A knockdown was not called, for the record. It got chippier, with holding, and yapping by Broner. Mercante would tell AB to stop talking. A punch caused a slice on the left eye of Santiago, but it wasn’t huge. The corner asked the Puerto Rican to start throwing harder. They saw Broner coming on, and their guy losing steam.

To the tenth, we saw Broner clipping with a left hook, his lead right had some zest on it. He might have won the round, and maybe won three in a row. In the 11th, Broner looked to be having fun, he moved more.

“Stay sharp, champ,” Broner said at the 1:30 mark. I think he was talking to himself. Santiago had an energy surge, found a pocket of fuel, but did he do enough to sway the judges?

“We gotta knock him out,” the trainer told Santiago after the 11th. He didn’t do that, but he worked harder than AB, and deserved to take the round.

We’d go to the cards, with an air of uncertainty hanging over us, but also some clarity. You didn’t know what the judges would deliver for a verdict, but you did know that Broner wasn’t able to hit the rewind button, and look like a pre 2012 version of his best self.