Adrien Broner doing all the right things, according to trainer Mike Stafford 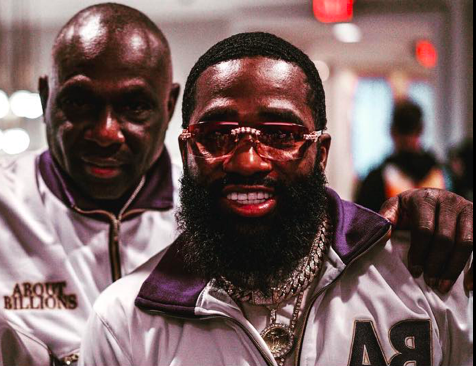 He’s been staying out of trouble, Coach Mike Stafford tells me, and I don’t blow smoke back at the coach.

“I’ve heard this before, Mike,” I told the Cincinnati boxing perennial, who checked in from Florida. “All due respect, but I’m doing this because it’s you, I know from talking to you over the years, you’ve always said to me, ‘Adrien is like a son to me'”

I’m by no means a fan of so much of the Broner antics, but Stafford strikes me as a legit good soul. Before we started talking boxing, we discussed potato salad, because my older daughter was making a batch. “Don’t forget the sweet pickles, or relish,” said Stafford, and Bella could hear him, because I was on speaker phone, so I could type. This tip came from knowing his mom’s potato salad was the best, and that Thelma Stafford Furr, from Tennessee originally, would add a dollop of pickle.

So, bless him, all the wayward sons could use a Mike Stafford in their corner, patient, willing to offer advice and wisdom, but without a side dose of scorn.

Lord knows, the 31 year old Broner, who fights Feb. 20 on Showtime in a main event against 14-0-1 Puerto Rican Jovanie Santiago, has experienced ample scorn the last seven or so years.

It was Jan. 19, 2019 the last time Adrien Broner was in the ring for real, he fought Manny Pacquiao and took an L.

He got slayed for getting hammered by Marcos Maidana, and many a meme has been hatched in a quest to bust chops on the talented but oft troubled pugilist. And the last few years have been rougher, he’s been too often getting picked up by law enforcement. But now, he swears, it’s different.

I’ve seen the light, that’s been the Broner message leading up to this opportunity, which is second-chance number four, or so.

Cincinnati’s Broner is 33-4-1, 24 KOs, and he is an attraction as much for what he says and how he acts outside the ring as much as what he’s done in a ring in a spell. By age 26, he’d won world titles at 130, 135, 140 and 147 pounds. Broner has faced a CVS receipt lengthy roster of top practitioners, including Paulie Malignaggi, Marcos Maidana, Mikey Garcia, Jessie Vargas and Manny Pacquiao.

We got the press release today, from Showtime, and I scanned it with a skeptics’ eyes. Been there, done that, not gonna invest much if any into the Broner thing, that was my thinking. And I told Mike Stafford as much, I wasn’t going to be BSing him to his face, and write something else. I told him, I will listen to you, because I’ve heard enough of you over the years to understand you are real, and have a heart, and love the kid, even when he’s a full-on knucklehead. 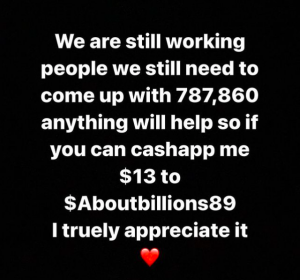 Back in November, Broner raised eyebrows with this IG fund-raising plea.

For about three months now, the 64-year-old Mike Stafford said, Broner has been training. They are in Florida, the western part, and he was in Centeno’s Sweatbox Boxing Gym in Davie, Fla. when me and the trainer spoke on the phone. “He’s like a son to me,” Stafford said, repeating a line I’ve heard aplenty. “Would I ever kick him to curb, and refuse to work with him? Never.”

He wouldn’t call it a “reunion,” he continued, because he’s stayed by the kid, while AB looked to switch it up, and have Kevin Cunningham run the show from the training side. “It’s basically just a reminder,” Mike Stafford said. “I never left. I been here. And are we looking to go back to basics, when he was young and hungry? Definitely. Mike, he was “AB,” and all that, and I want to get back to when we called him “Twin.” He was “Can Man,” then “The Problem,” then “AB.”

Broner is indeed a twin, his brothers’ name is Andre.

So, the coach is saying he wants to turn back that clock, and get into a similar mode before it all got too big. “He’s still got that in him, Mike,” he said. “You lead that star life, though…He can leave the women alone, and concentrate on boxing, and God willing, he can get back and become five time.”

We spoke about how most of us need to learn those hard lessons ourselves. We can have role models weighing in, but most of us have to gain wisdom by dealing with missteps. Lord knows Broner has had plenty of practice there, right? 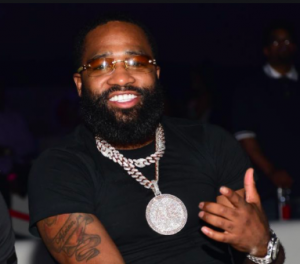 There’s been too much time spent in clubs, and boozing, and not enough concentration on the craft. Stafford says Broner has been on his best behavior of late, though.

“It used to be, I’d talk to him, and know he was a kid, growing up. But now he’s a fully grown man, has his own promotional company. He knows he’s not a kid. He’s doing the right things. Going to jail, to court all the time, it doesn’t make sense to me.”

OK, but Mike, I’ve heard it before, I protested. “When a new guy comes in the gym, he’s talking to them, giving them advice,” he went on. “He’s acting different. I see it.” He sees it at Sweatbox, and also when they hit Brandon Marshall’s House of Athlete Gym in Weston, Florida. “It’s class A, you have all the football players there.”

And, one thing that he’s seeing which is helping Broner make this latest push toward a win streak, and more high-level fights, “He’s enjoying himself. He wasn’t enjoying boxing before. My thing is, ‘Have fun. If you aren’t having fun, you might as well give it up.”’

He may have contemplated doing that, after losing to Mikey Garcia, drawing with Jessie Vargas and losing to Manny Pacquiao. He’s not won since 2017.

But, I listen to Mike Stafford (below, left) and start to believe a tiny bit. Or, more so, like I told Stafford, I opened my mind to the possibility that maybe we’ll see a better Broner, one who lets the hands go, gets aggressive more often. And my open mind goes from 3 to 5% when Stafford tells me more. 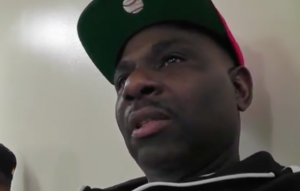 “You have a right to feel doubt. Adrien created the doubt,” he continued. “He’s got to prove himself again. He knows that Showtime and Al Haymon have (expectations), that he’s gotta prove it to them. He wants to be five time. I see patterns in the kid, he stopped drinking. I see the things he’s doing, he’s in camp every day. Today, he beat me to the gym. He’s doing interviews, he’s on target with his weight, and everything. And he’s a student again.”

I listen and relay to you. I hear you before you say it, we’ve heard it, Woods. And what Mike Stafford says can all be true and Broner can revert to form, and fight in a lackadaisical fashion Feb. 20 at Mohegan Sun. We shall see.

Anyway, I might have bought a time share from Stafford by this point. “The guy we’re fighting, he’s in it to make a name for himself. I think he’s going to be nervous. He will see the power and the speed from Adrien. Yeah, Twin got something to prove. He got the love back for boxing. He took a break, looked at his stuff, one day just woke up and said to himself, I’m ready to do this thing again.”

I was almost at 6% when Stafford added this, after I pushed, asking if we’d see Broner pressure more on Feb. 20, act like he needs to win, not just get paid. “Be patient, remember it’s been two years,” he said.

I laughed and it came back around for me the human being angle of this. “You gotta love him, show him you’re with him, not turn your back on him. You gotta go beyond all the negative,” Stafford said, in closing. “You gotta know the kid.”