David Avanesyan more than ready to rumble with Josh Kelly 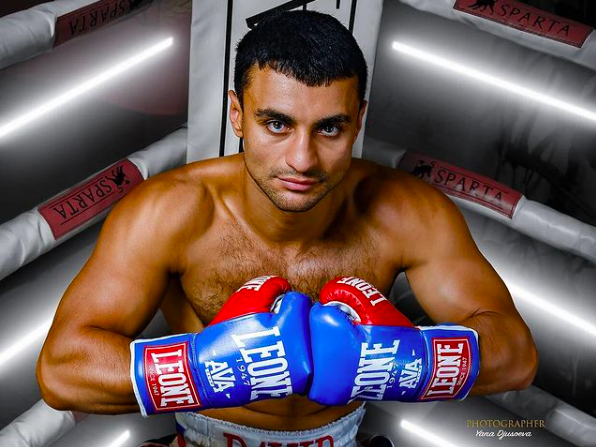 The two had first been scheduled to meet in December 2018. However, Kelly fell ill, scuppering the contest. Despite several attempts since to make the fight, it hasn’t happened until now.

“I hope now they don’t change the fight date,” Avanesyan (26-3-1 with 14 KOs; click here for BoxRec) told The Ring, with some help from his trainer, ex pro fighter Carl Greaves. “Four times now.” 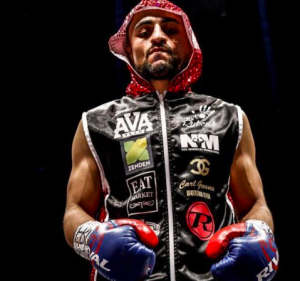 Readers, who do you like, Avanesyan, pictured, or Kelly? Tell us in comments section.

Greaves is well versed on the timeline of events since their first encounter was quashed.

“The first time Kelly pulled out three hours before we were leaving for the show,” explained the trainer. “They’re saying he was sick, I don’t quite believe it myself but that’s in the past.

“It should have been rescheduled not long after that but for one reason or another it dragged on. Once David won the European title [against Kerman Lejarraga in March 2019], Kelly became the mandatory. The fight was scheduled for March [2020] and then that felt through with COVID and was scheduled again for January 30th this year and obviously it’s finally happening on February 20th.”

The 32-year-old Russian is respectful of Kelly’s ability but sees openings to gain the victory, though he prefers to keep those to himself.

“I don’t want to give too much away but I’ve seen things I can exploit.”

It’s been an extremely frustrating time personally and financially for Avanesyan.

“I was over here (England) for six weeks before the March [2020] postponement,” he said. “Then I went back home and was told the fight was going to happen in September and it never happened. Then I was told October, then finally November 27th. We heard Kelly wouldn’t be ready in time. Then it got moved to December 12 on the Anthony Joshua-Kubrat Pulev card but that didn’t happen.

“It got moved to January 30th. It’s been very frustrating. I’ve been in and out of camp, they’ve messed me about. Flew in on December 20, went home for a week after the [January 30] postponement. Trained at my house [in Russia] every day.” 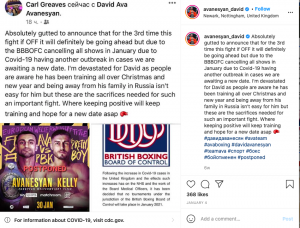 There were too many updates like this one. Now, knock on wood, there will be a smooth ride to the ring, and getting Avanesyan-Kelly properly sorted.

The defending European champion intends to take all his annoyance out on Kelly.

“Yes,” he said, laughing. “I’m training hard all the time and then I’m not getting any fights. Not seeing my family, no money coming in. It’s tough. Losing money with not fighting. I hope to win this fight and the next fight is for a world title.”

Greaves has been equally frustrated but is glad his fighter finally has the opportunity to put Kelly behind him and if victorious move onto bigger things.

“Let’s be honest, this fight should have been put to bed a long time ago,” said Greaves. “I just hope we can finally get this fight on. Hopefully David will have a great performance and push on to a world title fight.

“I think the fans are looking forward to this fight. It’s very, very intriguing, there’s a lot of talk about it, a lot of animosity from the pull outs in the past. It’s built into a very good fight. It’s a lot bigger fight than when it was scheduled to happen in 2018.

“He’s a very good fighter, so you have to give him a bit of credit but his last performance against Winston Campos, he’d didn’t look great at all. David’s on a roll and we’re very, very confident.” (See below, Avanesyan beat Shane Mosley in 2016, in the last bout of Shane’s career.)

Kelly turned professional in 2017 after a successful amateur career. Kelly initially impressed, widely outboxing former IBF junior middleweight titlist Carlos Molina (UD 10), in just his sixth outing. He claimed the Commonwealth title in his next fight, stopping Kris George (RTD 7). He drew on his American debut against Ray Robinson (D 10) but got back to winning ways, in his most recent fight, against Campos (UD 10) in December 2019. The 26-year-old is (10-0-1, 6 KOs).