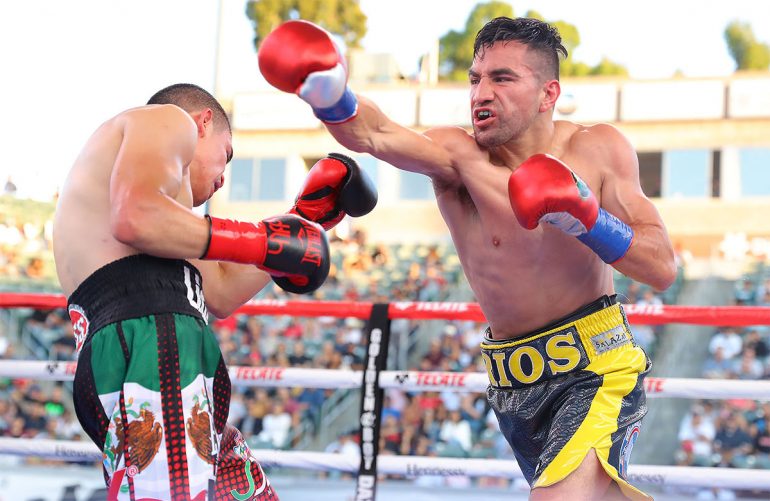 It is safe to say that junior featherweight contender Ronny Rios is itching to end his 15-month layoff.

Rios, who hasn’t fought since scoring a fourth round knockout of Hugo Berrio in November 2019, will finally let his hands go on Saturday, when he faces off against the always tough Oscar Negrete in a scheduled 12-round contest at Fantasy Springs Resort Casino, in Indio, California.

“First and foremost, it’s freaking exciting just to come back to the ring – let alone against Negrete – a tough opponent,” Rios told The Ring.

“In my opinion, he has only suffered losses against top fighters.”

In an indelible trilogy, Negrete (19-2-2, 7 knockouts) fought Joshua Franco to two draws and a razor-thin split decision loss. He was also outpointed by former Ring No. 1 junior featherweight contender Rey Vargas in December 2017.

The 31-year-old Rios has a proclivity to surprise. He bloodied Diego De La Hoya’s nose in their July 2019 bout before a sweeping right hand handed the Mexican his first loss in a sixth round knockout.

Perhaps fight fans will be in for another shock as Rios claims that this particular training camp has never been better.

“Camp has been phenomenal and continues to get better,” he added. “I’m looking forward to Saturday.

“I have a couple game plans and I will execute each of them to a T. I will let my performance speak for itself.”

When asked what makes Negrete such a formidable opponent, Rios (32-3, 16 KOs), of Santa Ana, California, provided The Ring with his vantage point.

“He has a lot of heart and he knows how to make you uncomfortable,” Rios explained. “For a lot of fighters who face Negrete, they feel like they are stuck in a box.

“When he comes forward, he smothers you and physically takes those advantages away from other fighters.”

However Rios believes he has an extra wrench in his toolbox that could loosen Negrete’s attack.

“With my style, I can box or I can fight him on the inside,” Rios said. “We have sparred several times in the past but it is just a different atmosphere with eight-ounce gloves and no headgear.

“It’s going to be an exciting fight and I just don’t see Negrete doing anything that I can’t figure out.”