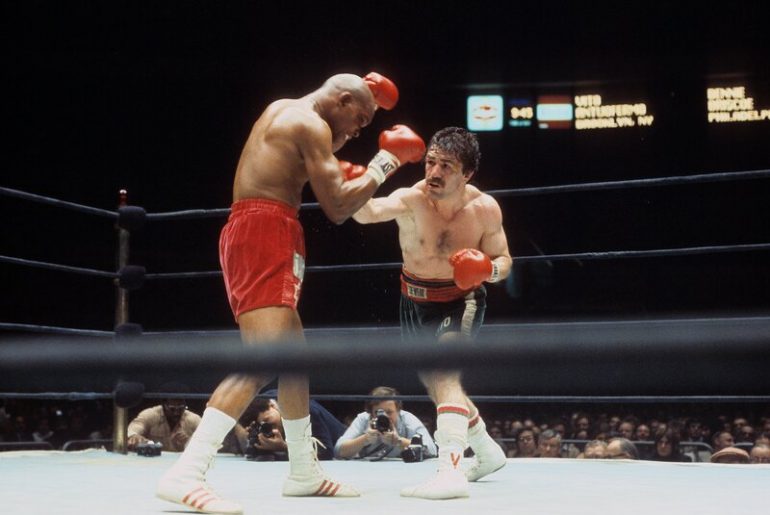 Antuofermo (right) on the attack against Bennie Briscoe. Photo from The Ring archive
03
Feb
by Anson Wainwright

Italian-American Vito Antuofermo was a hardnosed slugger who briefly held the undisputed middleweight championship during a productive career in the late 1970s-early 1980s.

Antuofermo was born in the small town of Palo del Colle, near Bari, in the south east of Italy on February 9, 1953.

“It was nice living over there,” Antuofermo told The Ring. “It was a lot of fun, but we didn’t have everything they had in America.

When Antuofermo was 16 years old, his family decided to migrate to America, where they had relatives.

It was during this time that Antuofermo was introduced to boxing. He often fought on the streets and on one occasion, when he was 17, one of his fights was broken up by a policeman who introduced him to the Police Athletic League (PAL).

“One of the officers was talking to us and he said, ‘You want to box?’ I said yeah, but I really didn’t know how to fight,” Antuofermo recalled. “The guy I was fighting must have had more experience than me and he beat the hell out of me.

“When I went home, I figured they gave me a beating, so I don’t fight anymore. I then thought I’m going back tomorrow night. I realized I needed to train to learn how to fight. When I went back the next day, I remember the trainer told me he was surprised to see me. He took a liking to me and he was training me.”

Antuofermo went on to win New York Golden Gloves novice section in 1970 and the following year he lost in the final of the open class to future world light heavyweight titleholder Eddie Mustafa Muhammad.

In the fall of 1971, Antuofermo, who was 28-2 as an amateur, received $300 for his professional debut and won a four-round decision on a local card. 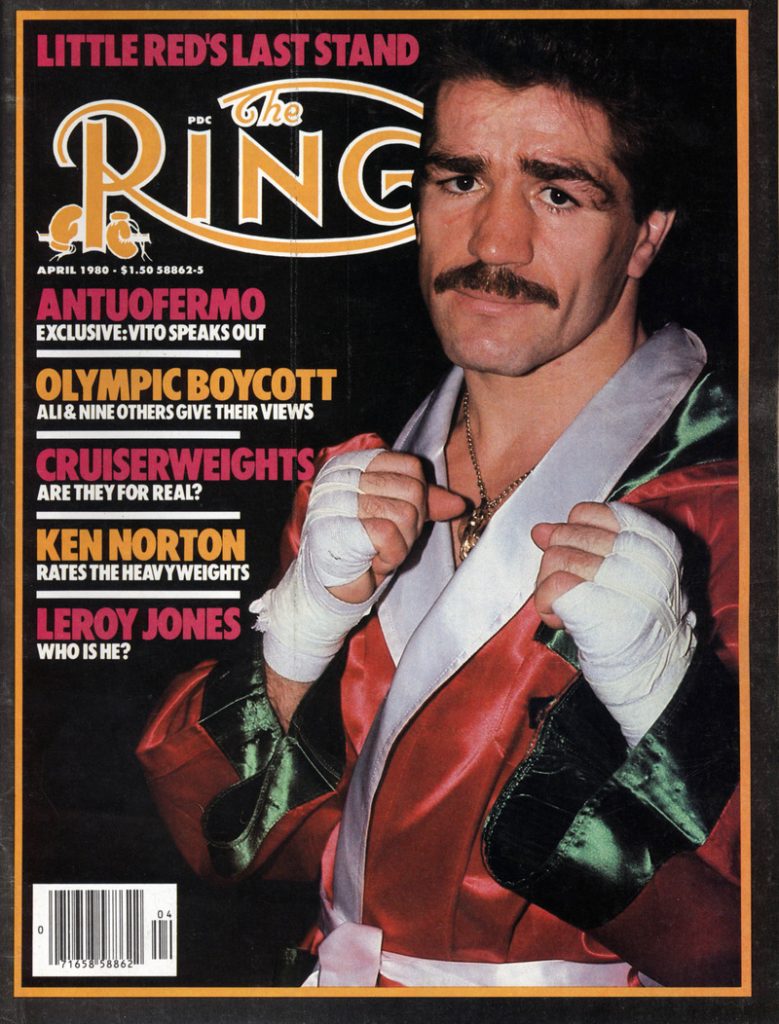 After drawing in his third outing against Charles Hayward, Antuofermo moved his record to 17-0-1, but he was then stopped on cuts – a frustrating problem that would persist throughout his career – by Harold Weston in July 1973.

“Emile Griffith was a terrific fighter,” offered Antuofermo. “He was a little bit older when I fought him. I saw his fights, when I was a kid in Italy, when he fought Nino Benvenuti. When I fought Emile Griffith, he wasn’t that good.”

In early 1976, Antuofermo traveled to Germany where he edged his way past Eckhard Dagge to claim the European junior middleweight championship. He retained the title by stopping Jean Claude Warusfel in 13 rounds before surprisingly dropping an eight-round decision to unheralded Frank Wissenbach.

The last fight of his mini-European adventure came against Maurice Hope in Rome in October 1976. “I was winning the fight up until the few seconds of the 15th round,” Antuofermo said. “I got hit with a big left hook from him at the back of my ear at the beginning of the 15th. That was the punch that really hurt me and I don’t remember nothing after that.”

Those wins helped him earn a shot at the undisputed middleweight champion Hugo Pastor Corro in Monte Carlo in June 1979.

“That was the crème de la crème,” said Antuofermo, who won a 15-round split decision. “I was waiting for that day since I went to the gym.

“Corro was very fast. He beat Rodrigo Valdes twice, easy. Howard Cosell said, ‘Vito didn’t beat him, he mugged him.’ That was the only way to fight this guy. I wasn’t a great boxer, I was a slugger. I wasn’t a big-puncher, but I never got tired, and I always threw punches. That’s how I won most of the fights.”

In his maiden defense, Antuofermo was tasked with facing the man many experts believed to be the uncrowned champion, Marvelous Marvin Hagler, in November 1979.

“At the time, I was working for Coca Cola and I wanted to get their name in the spotlight,” Antuofermo recalled. “I get together with Coke and we have a couple of boxing shoes made in Hagler’s size with an advertisement on the soles. I present them to Hagler at another press conference, and say, ‘Hey, Marvin, I’d like to give Coke some exposure, so would you wear these?’ He looks at me funny and then I show everyone the soles with the ad. One says, ‘Drink Coke’ and the other says, ‘Good Night’. I tell him, (laughing) ‘When I knock you out everyone’s going to be able to read the ad.” 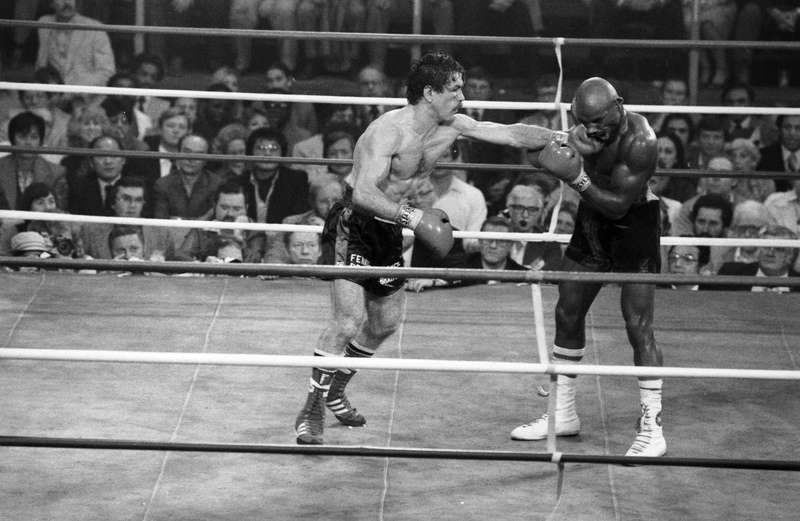 Antuofermo and Hagler in their first encounter. Photo from The Ring archive

During the bout Antuofermo bled profusely from six cuts that required approximately 75 stitches. At the conclusion of 15 hard-fought rounds the judges couldn’t separate the pair, but Antuofermo was deemed very lucky to retain his titles on a controversial draw.

The hard-charging champion lost his titles to Alan Minter by split decision in Las Vegas in March 1980 and was stopped on cuts in a direct rematch three months later.

“[For] the rematch, I went to London. I trained in Italy for that fight. A couple of days before that fight I went to London, sparred and I got a little cut. They were looking to cancel the fight. I didn’t want them to cancel the fight. I thought I won the first fight, so I thought I was going to beat him again. This time we had all neutral judges. They told Minter I got cut in the gym and of course he went right after the cut and I was bleeding from the first round. In England you couldn’t use the coagulant we used in other fights [in America].”

Antuofermo returned with a win that set up a rematch with Hagler, who had unseated Minter as champion.

“I got cut against Hagler,” he said. “In the second round we butt heads, I think it happened by accident. At the time I thought he did it on purpose. I was cut very bad and they had to stop the fight in the fourth round.”

After a three-year retirement, Antuofermo returned with four wins before losing to unbeaten prospect Matthew Hilton in October 1985. This time the former champ decided to retire for good and walked away with a record of 50-7-2 (21 knockouts).

Antuofermo, now 67, has been married for over 40 years. He has four children, five grandchildren and lives in Howard Beach in Queens, New York.

After retiring from boxing, Antuofermo began acting and appeared in several motion pictures including Goodfellas and The Godfather Part III, as well as the critically acclaimed TV series The Sopranos. He also worked as a longshoreman for 35 years.

BEST JAB
Maurice Hope: Usually the southpaws had the best jab because they jab with their right hand. I had trouble with two English southpaws; one was Alan Minter and the other was Maurice Hope. With the regular jab, I had no problem with nobody. Hagler was a southpaw, too, but I had no trouble with his jab. I would say Maurice Hope had the better jab.

BEST HANDSPEED
Wissenbach: I think he had the fastest hands of anyone I fought.

BEST FOOTWORK
Hugo Pastor Corro: I had trouble with Hope’s footwork. Corro also gave me trouble with his footwork, he had much better footwork than Hope.

SMARTEST
Emile Griffith: The year before we fought, he fought Carlos Monzon in Argentina and went 15 rounds with him. Very smart fighter.

STRONGEST
Marvelous Marvin Hagler: He was strong outside and inside. He was stronger than me. The 15-round draw was the toughest fight I had.

BEST CHIN
Hagler: I hit him the hardest and he took the punches.

BEST PUNCHER
Eugene Hart: There was two big punchers I fought, they were both from Philadelphia, Bennie Briscoe and Eugene “Cyclone” Hart. Hart was the biggest puncher I faced, he knocked everybody out. He hit hard with his left hand. When I fought Briscoe he was 34. I don’t think it was the same Briscoe who fought Carlos Monzon in 1972. He was one of the hardest punchers I fought. Hagler’s power was very good, too.

BEST BOXING SKILLS
Corro: Howard Cosell said, ‘Vito didn’t beat Corro, he mugged him.’ That was the only way to fight him. He had great skills; he was a great boxer. Alan Minter had great skills.

BEST OVERALL
Hagler: He fought good inside, he was stronger, hit very hard and he was a southpaw. He was an all-round great fighter.