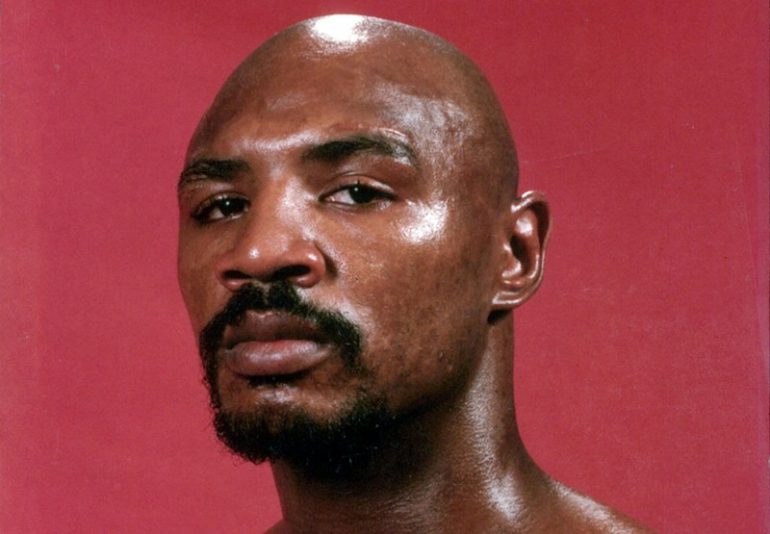 Photo from The Ring archive
20
Apr
by Anson Wainwright

Editor’s Note: This feature was originally published in the May 2014 issue of Ring Magazine

Marvin Hagler lived up to what became his legal name: “Marvelous”. Hagler was a breathtaking hurting machine at his best, a very good, aggressive boxer with tremendous punching power and one of the best chins of all time. He insisted the only knockdown of his career, against Juan Roldan, was a slip.

Hagler lost two times relatively early in his career but then went 36-0-1, the blemish being a controversial 1979 draw against Vito Antuofermo in his first title fight.

Some considered Hagler the best middleweight in the world even before September 1980 when he fought Alan Minter for the undisputed championship in London. Hagler won when Minter could not go on because of a cut, marking the beginning of one of the division’s greatest runs.

Hagler made 12 successful defenses over five-plus years, 11 by knockout, and also picked up the IBF title along the way. Among his victims: Roberto Duran (UD 15), Thomas Hearns (TKO 3) and John Mugabi (KO 11). 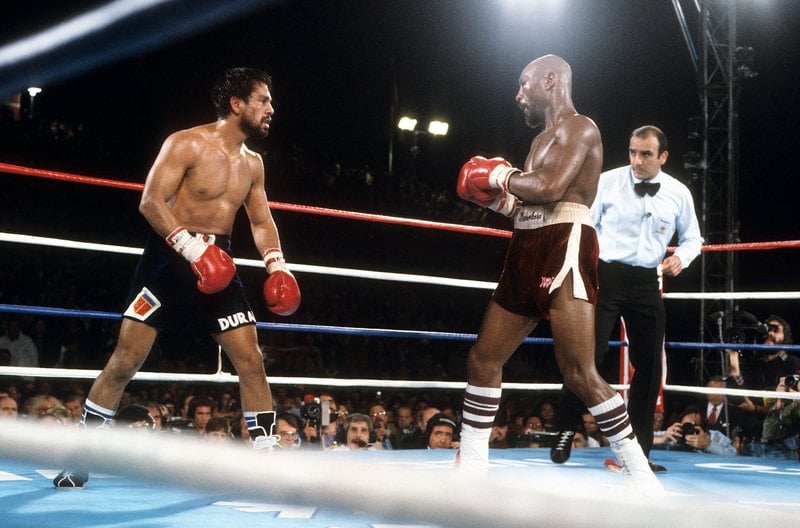 Hagler closed well to outpoint the legendary Roberto Duran in 1983. Photo from The Ring archive

The Hearns fight is remembered as one of the greatest of all time, as the principals exchanged murderous punches at a frenetic pace from the opening bell. Hagler sustained a deep cut to his forehead but continued to press Hearns until finally hammering his adversary to the canvas at 1:52 of the third round.

“With Tommy Hearns, finally they gave me what I’m looking for,” Hagler told The Ring. “I knew it was going to be that kind of a fight because [during] the buildup to the fight, he didn’t like me, I didn’t like him.”

Hagler would be named The Ring Fighter of the Year in 1983 and 1985. His victory over Mugabi in 1986 set up a showdown the following year against Sugar Ray Leonard, who was making a comeback after almost three years out of the ring.

Hagler found his groove after a slow start but it wasn’t enough to prevent Leonard from winning a split decision, which Hagler still disputes today.

“I didn’t really feel I lost,” said Hagler, who then mentioned his early setbacks – both of which he avenged by knockout – and Leonard’s refusal to give him a rematch. “… They were a learning experience, they put a lot of hatred into my war game. I think Leonard looked at my record and said, ‘Hagler, forget you man! You think I’m crazy?’

“If the shoe was on the other foot, I’d have gave him a rematch because it shows the mark of a champion.”

Hagler (62-3-2, 52 knockouts) retired from boxing following the Leonard fight. He was inducted into the International Boxing Hall of Fame in 1993.

“Why do you want to hang around after all your hard work and let someone get lucky and destroy your record?” he asked. “After I had nothing to prove to myself, it was the best thing to walk away.”

Hagler wishes he could’ve faced fellow legend Carlos Monzon. The great Argentine retired in 1977, when Hagler was becoming a contender.

“I think it would have been an interesting fight if I had fought Carlos Monzon,” he said. “I think he was a great champion. I believe I would have caused some sort of problem for him.”

Hagler, who turns 60 in May, lives primarily in Italy. He took time out of his busy schedule to speak with The Ring about the best fighters he fought in a variety of categories.

BEST JAB
Thomas Hearns: He was a person who was trying to stick and move, he used his jab a lot. He had a great jab.

FASTEST HANDS
Roberto Duran: He caught me for three rounds at the start of the fight, which I didn’t understand. He caught me with an overhand right. As soon as I would jab, he’d throw the right hand. It didn’t hurt me too much, but it was annoying, aggravating. I really didn’t know what was happening, so I went back to the corner and asked my cornerman. I said, “What’s happening?” He said, “Marv, what he’s doing is that he’s timing you. Every time you shoot that jab out, he’ll go over with a right hand.” After [that], I started faking instead of just throwing it, and I started getting a better offense going.

FASTEST FEET
Leonard: You would have to say Leonard because he didn’t [just] move, he ran. It was hard to catch him. I wanted to fight because that’s what I am, I’m a champion. I’m a fighter and came to fight. I believe in that fight, I came in as an underdog. This guy didn’t want to take away my title, he wanted to survive, and it’s hard to beat a guy who just wants to survive.

BEST CHIN
Alan Minter: Believe it or not, I have to give it to Alan Minter because he was champion and he didn’t want to lose. I hit this guy with a lot of punches and he took a couple on the chin. I was amazed. I knew this was what I wanted, and I wasn’t going to stop. Unfortunately he bled early. I was still trying to knock him out with every shot. He took a lot of punishment.

SMARTEST
All of them (laughs): Because when they stepped in the ring with me, they already knew the deal: It was going to be a tough fight. They had to use their skills, their brain, their physical and mental attitude against me because I was very unorthodox. I could fight on the left-hand side and right-hand side. So they had to probably train harder to adapt to my style. But every fighter I fought, I never fought the same way. Each fight I had I was always in better condition than I was before.

STRONGEST
Mugabi and Tony Sibson: I remember seeing Tony Sibson at the weigh-in. This guy was strong. I remember when he hit me on the chest, he looked much stronger and bigger than me, and he’s supposed to be a middleweight. Mugabi, I believe he put on more weight before the fight. I could feel his body against me. He felt like a light heavyweight, he didn’t feel like a middleweight. When he threw punches, they were all deadly, very hard punches. This guy felt like a light heavyweight to me, so I had to wear him down, to take away some of that strength.

BEST PUNCHER
John Mugabi and Hearns: Because they came to fight. They came to take my title from me. Mugabi hit me with an uppercut. It didn’t hurt, but it was a hard punch, and I learned something from that. I had to regroup and come up with a different strategy. Also, with Tommy Hearns, he hit me with one good right hand, a good shot. I knew then that was his hardest punch, and I wanted more. I got more aggressive. I realized I had to keep the pressure on him, make him move and make him throw that right hand so he would leave an opening for me.

BOXING SKILLS
Duran: I would still say Roberto Duran. I loved that fight the most because between the both of us it brought out our skill, our talent. For me wanting to defend my title, for him wanting the fourth title, I mean it became a cat and mouse game. I enjoyed that fight, it was exciting.

BEST OVERALL
Duran: I would say Roberto Duran was very experienced, plus he was a three-time world champion when I fought him. I gave him the opportunity to win a fourth, which didn’t happen (laughs).