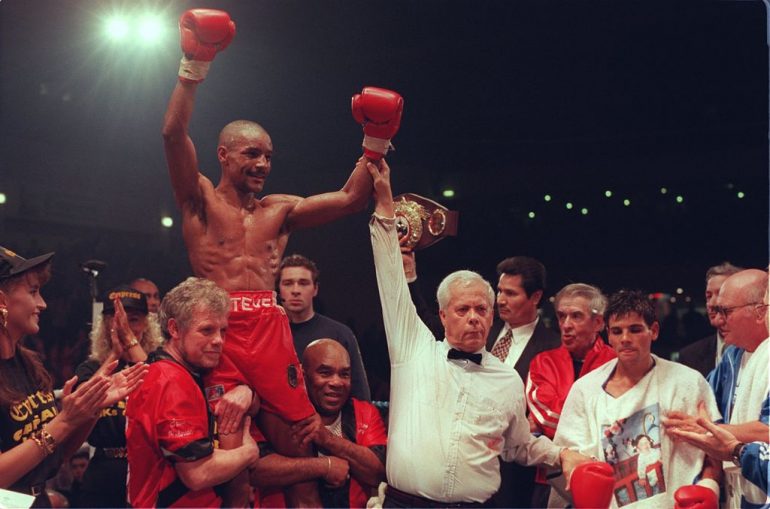 Welsh featherweight Steve Robinson was one of the most unlikely world titleholders in the modern era. His career seemed destined for journeyman status when, out of nowhere, he was offered the opportunity to fight for the vacant WBO 126-pound title at 48 hours’ notice. Robinson stunned the hometown favorite and went on to make seven successful defenses.

Robinson was born in Cardiff, Wales, the middle child of three, on December 13, 1968.

“Life wasn’t easy,” Robinson told The Ring. “I was from a one-parent family. I knuckled down and toughened up. I started at the boxing gym when I was nine and had my first amateur fight when I was 10 years old… that kept me off the streets.”

Robinson became a regular at Ronnie Rush’s Ely Star amateur club. The youngster enjoyed boxing but drifted away for an extended period in his teens. Returning to the sport at 19 years old, he would have approximately 25 amateur bouts, total, before turning pro.

The young novice combined a day job in a department store with his chosen profession. It was far from easy, and Robinson frequently found himself on the road, fighting on small hall shows against home fighters who were often given the nod in very close fights.

“I had just finished pie and chips with a round of bread,” he said laughing. “My trainer, Ronnie Rush, phoned me and said, ‘I’ve got a big fight for you!’ I said, ‘When is it?’ He said, ‘Two days’ time.’ I said, ‘What type of fight?’ He said, ‘World title fight.’ I said, ‘I won’t be ready for that!’ He said, ‘You will, you’re fit enough, you can do it. If you lose, you lose to a world champion, but you won’t lose, you can beat this guy!’ I packed my bags and went to Newcastle.”

“They sanctioned the fight… they wouldn’t do it today,” Robinson acknowledged. “I was six pounds over two days before… lucky I was a natural featherweight.

“I had to wear tight clothes and a couple of layers, sweat it out, run a couple of miles, skip a few meals and I made the weight. I felt drained, but I was alright. I had a lucky shot and took it with both hands.”

Little was expected of the 23-year-old, but he got off to a good start. Midway through the fight, however, he suffered a bout of cramp. He told Rush, who quickly admonished the situation by stamping on his toes, and telling him, “Welshmen don’t quit.”

Robinson gutted it out, and he even put it on Davison late in the fight. Understandably, given his previous history, Robinson was weary of the scorecards, but on this occasion, and rightly so, the judges gave him the verdict.

“It came all of a sudden, it was a dream come true,” Robinson said with a smile. “That’s why they call me the ‘Cinderella Man’. I didn’t celebrate with a drink… I just had a natural high with my friends and team. When I came back, I had a party.”

Robinson made his first defense just three months later, when he met British champion Sean Murphy at the National Ice-Rink in Cardiff. Buoyed on by an ardent fanbase, Robinson, who had cleared improved since winning the title, stopped the Englishman in nine rounds.

Former world titleholder Colin McMillan was supposed to end the fairytale when he traveled to the Welsh stronghold in October 1993. However, for all of McMillan’s skill, he was unable to hold off the marauding Welshman, who upset the 3-1 pre-fight favorite by wide unanimous decision.

Next up was another former world titleholder, Paul Hodkinson, and again, the challenger was favored to win. In March 1994, the pair almost fought to a standstill, but it was the Liverpool man who finally wilted under a heavy barrage in the final round.

In October of that year, former three-weight world titleholder Duke McKenzie was looking to add a fourth crown to his already impressive haul. Again, Robinson hadn’t read the script and upset McKenzie in nine rounds.

“We planned on the left hook to the body,” explained Robinson. “We worked on that in the gym and it came at the right time.”

Following his seventh defense, Robinson jetted off to Portugal for his honeymoon in the summer of 1995. Upon his return, he received news of an impending fight and he had very little time to prepare.

“I was hoping to get a unification fight, then Naz (Prince Naseem Hamed) came in and upset my plans,” Robinson stated. “I didn’t think Frank Warren would make me fight him because he was my promoter at the time, too. You’d think he’d have Naz fight for a different version and then fight me in a unification.

“I was told I had to fight Naz in a certain time or [the WBO were] gonna strip me. I was so proud, I thought, I’m gonna fight him. I was quite fit, but I wasn’t mentally there, and I was going through a court case.

“I only prepared for three-and-a-half weeks. No excuses, but I needed a bit more preparation for that style.”

Hamed, a burgeoning superstar, traveled to Cardiff and showed the world his immense talent, ripping the title away via eighth-round stoppage.

Robinson continued his career, but, despite winning the European championship, he never fought for another world title. The amiable Welshman retired in April 2002 with a record of (32-17-2, 17 KOs).

After retiring from boxing, Robinson became a personal trainer. He also coaches his son, Jacob (8-0, 2 KOs), as well as several amateur boxers.

“I’m proud with what I achieved,” Robinson said. “I’ve been a world champion. I was the people’s champion. I always gave people a lot of entertainment. I always had time for people.”

Robinson, now 52, is married, he has three children and lives in Cardiff. He has a book coming out in the coming months.

The former world titleholder graciously agreed to speak to The Ring about the best he faced in 10 key categories.

BEST JAB
Naseem Hamed: He was so quick, and he flicked his hands from being down low. He threw from awkward angles. He had quite a powerful jab. He was a southpaw, he could have been a right-hand southpaw, he generated a lot of power from his right hand.

BEST DEFENSE
Istvan Kovacs: He was very hard to hit clean, probably him and Naz compare, but out of the two, he was harder to hit. Everything missed by half an inch.

BEST HANDSPEED
Hamed: I’d say Naz again. His handspeed was good, he had good timing, he punched from all angles. Colin McMillan had good, quick hands but no power.

BEST FOOTWORK
Colin McMillan: McMillan had good footwork. I was a lot stronger than him; I was pushing him back. His punches weren’t affecting me, he wasn’t hurting me, but his footwork got him out of trouble a few times.

SMARTEST
Kovacs: I think the smartest boxer I faced was Kovacs or Naz. They set me up with traps and the next minute counterpunched me. Maybe Kovacs.

BEST CHIN
Hamed: I landed a good, clean shot on Naz and he took it well. Even though he was dropped a few times, he had a good chin. It was more balance with him when he got dropped.

BEST PUNCHER
Juan Carlos Ramirez: I boxed this Mexican Juan Carlos Ramirez. I got stopped in the 11th round and he hit me hard. I remember when I got caught by him, I got back up but I was quite dazed for a while. I think I was more dazed than when I boxed Naz. I went down… saw stars. I thought I could box on, but the referee looked at me and stopped the fight. The referee stopped the fight at the right time.

BEST BOXING SKILLS
Kovacs: He was very skillful. He had good stance and timing. He was an Olympic and world (amateur) champion, very well-schooled and I found it hard to pin him down. I boxed him toward the end of my career, but he was a good fighter.

BEST OVERALL
Hamed: I would say Naseem Hamed. He was very strong, technically good. The angles he punches at, the way he throws his shots, he had a good jab and he’s a powerful puncher. He had everything.