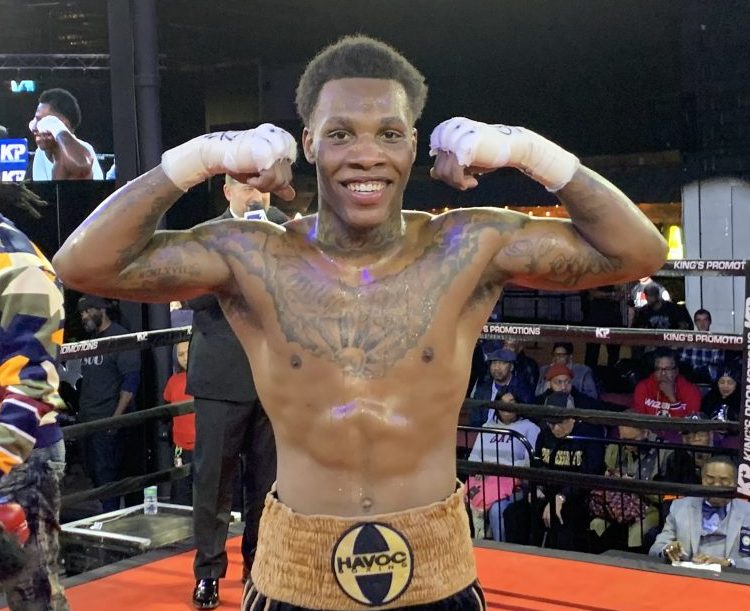 Shinard Bunch fought five times in 2020, and is on pace to fight even more frequently in 2021.
14
Jan
by Ryan Songalia

Plenty of boxers have used the “Showtime” nickname, but Shinard Bunch is probably the only one who has it on his birth certificate. Bunch’s mother had a feeling when he was born 21 years ago that he was destined for greatness, and the unique circumstances often manifested in Bunch having to call home from school.

“I used to get in trouble because the teachers wouldn’t believe me,” remembers Bunch (10-1, 9 knockouts). “They thought I was playing around, trying to be an asshole. But I actually wasn’t.”

The curtain raises on Bunch’s next show this Saturday, when he faces Dieumerci Nzau (11-13, 8 KOs) at the Elevations Event Center in Chester, Pa. in a six round welterweight bout.

The fight will be one of three he has lined up over the next month; he also has a fight set for Jan. 30 in South Carolina, and then it’s off to Florida for a February 13 date.

Bunch fought five times in 2020, and would have fought even more if not for a six month gap between February and August due to the Covid-19 pandemic. For his manager, legendary Philadelphia boxing dealmaker Russell Peltz, that level of activity is just fine by him.

“I’d love to see a guy fight every month, I’d like to see him fight every two weeks,” said Peltz, who didn’t take out a promoter’s license last year for the first time in the 50-plus years he’s been involved in the sport.

The third of six children who grew up in Brooklyn’s East New York section, Bunch first became addicted to the sport at age 5, when his mom brought home a DVD of Muhammad Ali’s greatest fights. “I just remember telling my mom I want to fight and move the way he moves,” said Bunch, who turned pro in April of 2019.

Even though he moved, Bunch didn’t leave his love for boxing behind. He says he had 406 amateur bouts, fighting frequently on local shows in the city, and traveling to fight in national tournaments.

As prolific as his amateur career was, Bunch says he considered quitting after suffering his first defeat at age seven. Prior to that he had won his first 30, and didn’t take his first loss lightly.

“I’m not gonna lie, I got mad,” said Bunch. “I was just thinking it’s boxing, I’m supposed to win everything…it was the end of the world.”

Bunch eventually got over it, and was rated as high as third in the nation after competing in the 2016 Nationals. His performance earned him a spot on the national team, where he got to cross paths with world champions to be Shakur Stevenson and Errol Spence, as well as Bernard Hopkins.

As difficult as his first amateur defeat was, his first pro loss, in just his third fight, was far easier to handle.

Peltz was co-promoting a fight card with Top Rank on ESPN+ when Top Rank Vice President Carl Moretti gave him a call inquiring about Bunch’s services for a clash with 2016 U.S. Olympic trials champion Paul Kroll. “I said, ‘What? Are you crazy?,’” remembers Peltz. Bunch’s promoter, Nedal Abuhumoud, didn’t think it was such a crazy idea.

Abuhumoud had brought Bunch to Peltz after his pro debut, and matched him with Tyrone Lewis for his second fight. Peltz had hoped to get a good look at the fighter Abuhumoud said was the best he’d ever signed, and asked Bunch not to score a first round KO. After Bunch carried Lewis through the first round, and then promptly finished him 30 seconds into the second, Peltz was hoping to get a better idea of what he had with Bunch.

“I said, ‘if we fight another guy like Tyrone Lewis and we knock him out in one round, I’m not gonna know any more about Shinard Bunch than I know now. So why don’t we fight Paul Kroll and we’ll see what we have?,’” Peltz recalls.

“When we got the call, I didn’t know who Paul Kroll was,” adds Bunch. “When I saw him fight, I felt there were some advantages we could exploit.”

Kroll earned a unanimous decision over six rounds, but he had to do it the hard way. Afterwards, Peltz spotted Bunch on the floor of the Liacouras Center’s dressing room, so exhausted he could barely catch his breath, and realized his guy gave everything he could to earn the win. “I said to myself, ‘I know what I have. I have a real fighter,’” said Peltz.

“It opened my eyes, I wouldn’t change it,” said Bunch. “I feel like the loss helped me more than a win would have done.”

The audacious matchmaking philosophy of Peltz, who came of age in the golden era of Philly club fights, when fighters like Marvin Hagler, Bobby “Boogaloo” Watts and Benny Briscoe didn’t need a belt on the line to take a risk, is at odds with today’s safety-first approach to building fighters for television, he feels. When Bunch was offered over $25,000 to face Top Rank prospect Elvis Rodriguez about a month and a half ago, Peltz was all in favor, reasoning there wasn’t much of a difference between a 10-2 fighter and an 11-1 fighter. The fight wasn’t made, but it underlined his confidence in his latest prospect.

“It’s a shame that the networks don’t want the best fighters, they want the fighters with the best records,” said Peltz.

“I’m not afraid of anyone with Shinard Bunch.”

Even if Bunch isn’t facing undefeated prospects at the moment, there’s been plenty to observe in his development. Peltz says he noted some difficulty that Bunch had with dealing with the southpaw Vincent Floyd in October of 2019, but he eventually figured him out enough to drop him twice before an accidental headbutt lead to a no-contest in round three. Then there was the Dennis Okoth fight in January of 2020, which Peltz said Bunch struggled in before stopping him in the sixth and final round.

The Nzau fight will be Bunch’s first with new trainer Chino Rivas, who works with Bunch out of TKO Fitness in Cherry Hill, N.J. Peltz holds Rivas in high esteem for his ability to develop Tevin Farmer and Jason Sosa, who are polar opposites in terms of style.

If there are still some bugs to work out, Bunch will have another shot to work on them in two weeks.

“He’s never had a real trainer before in my opinion. If the guys around him get pissed off, sorry, I can’t worry about that,” said Peltz.

“He’s got a world class trainer around him now. If he’s willing to listen, he can be a world champion.”