After surviving the streets, Mike Hilton now headlines in Trenton 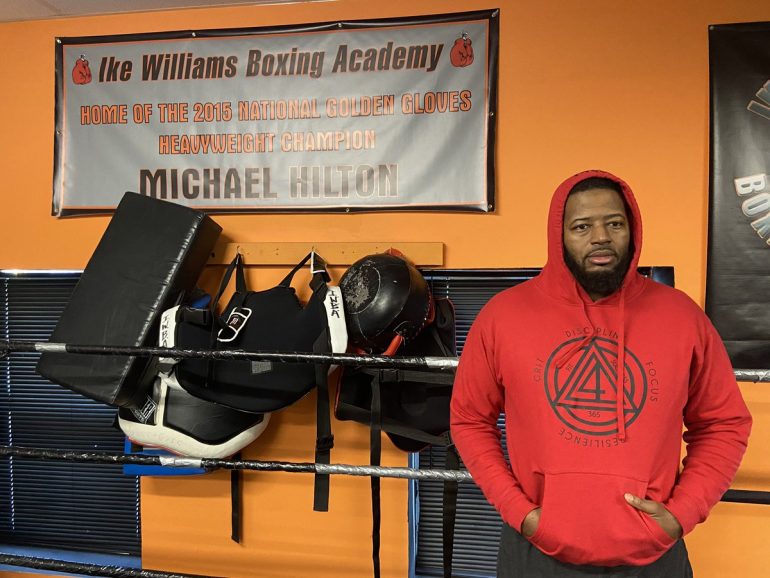 Michael Hilton, a former national amateur standout, has had to survive tough battles in the streets as well. Photo by Ryan Songalia
16
Jan
by Ryan Songalia

TRENTON, N.J. — It doesn’t take Mike Hilton long to respond when asked about where he’d be if he hadn’t found boxing.

“Dead, or in jail somewhere. That’s where it was headed,” said Hilton (9-0, 7 knockouts), a 33-year-old cruiserweight prospect from Trenton, N.J. One look at the stab marks across his body are enough to convince you that he’s not exaggerating. Prior to picking up the sport in his early 20s, Hilton had been a member of the Bloods gang, ranked higher among his peers than many others who were his senior. Before ring bells, it was gunshots that let him know the action was underway.

For someone who had grown accustomed to fighting off multiple attackers at once, a one-on-one fight seemed slightly less complicated.

“I did things I ain’t proud of, I got charges, been stabbed, I’ve been through a lot. I just thank God I was able to make it out,” said Hilton at the Ike Williams Boxing Academy, named for the lightweight champion of the ’40s and ’50s who called the city home.

Hilton will make his ring return after nearly two years out on Jan. 25, in his hometown at the Sun National Bank Center, in a fight scheduled for six rounds against an opponent still to be named. The fight will headline a card promoted by Silver Bow Promotions, the upstart company headed by Bill Halkias, who had managed Zab Judah’s career in recent years.

Trenton is known as much for its tough reputation as it is for being the state capital. Hilton says that its relative small size meant there was no place to hide from your rivals, leaving one with the choice to either fight or not leave the house.

“Growing up in the city made me tougher, it gave me that grit,” said Hilton. “In my neighborhood, if anybody do something to you, you gotta do that to them or worse.”

For Hilton, a father of four girls and a boy, it came down to not wanting his children to grow up without a father. He says boxing and church helped get him on the straight path forward, and even kept him out of jail. Hilton had faced drug and weapons possession charges, according to a story in the Trentonian, and at one point was facing eight years in prison.

As a teen, a friend had invited him to his mother’s church. After years of procrastination, he took him up on the invite.

“A few years later I got into a little trouble and [my friend] was like, ‘God can get you out of this, you change your life, you can work yourself out of this situation,’” remembered Hilton. He was originally looking at prison time; instead he got probation.

“When I went there the judge was like, ‘I see you go to church now, you’re involved with your community,’ and let me go. What she did was say, ‘I’ll push it back to the end, if you start getting into trouble then you gotta go to jail and do this sentence.’

“Even to this day I’ve been staying out of trouble, so God is good.”

Trainer Eric Judkins, who has trained Hilton since he started in 2007, has seen the transformation up close.

“The more he started coming to the gym and advancing as an amateur, the more it took him further and further away from the streets,” said Judkins, who boxed as an amateur in the ’80s before focusing on raising his family. “Boxing, you gotta put a lot of time into it. If you’re serious, it’s gonna actually consume your life.” 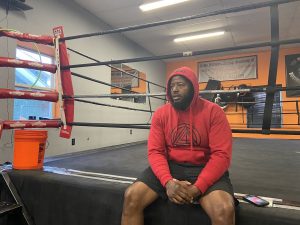 Hilton had wanted to join the local boxing club at age 16 but his aunt, who raised him, didn’t want her nephew taking punches to the head. He finally joined the gym at age 21, as a way to slim his 6-foot frame down from a high of 290 pounds. Having fighting ability in the street doesn’t mean that the transition to the ring will be seamless, however.

“One time I kinda started doubting it. I was sparring this guy and I swung a jab and he slipped it and hit me with an uppercut right in my sternum. I was like, ‘I don’t think this shit is for me.’ When I had the option to quit, I didn’t tap out. I said let me just stay in here and man up,” said Hilton.

Hilton only fought about 60 times as an amateur, but he got a lot of business done in that time, winning the NJ Golden Gloves five times, to go along with the USA Boxing Nationals title in 2013, and the National Golden Gloves in 2015.

Hilton turned pro in 2016, and kept a busy schedule until his most recent bout in March of 2018. Facing Hector Perez, Hilton had to climb off the canvas in round one before scoring knockdowns of his own in rounds two and three. The fight was stopped due to a cut caused by an accidental headbutt after the third. Hilton won a unanimous technical decision, but suffered a sprained ankle during his trip to the canvas.

Injuries and managerial issues kept him out of the ring, which he says impacted him emotionally.

“I was dealing with a lot of depression and stuff, going through the whole sitting and waiting period,” said Hilton.

His goal is to eventually get down to light heavyweight, and he’s taken to cutting out meat and sticking to an “Alkaline” diet to do so.

Halkias, a native of Hoboken, launched the “ChampBox” series with the hopes of keeping New Jersey boxing alive after the state had a slow schedule the past several years. He says Hilton was the perfect fighter to showcase.

“New Jersey has plenty of talent that may never have an opportunity to become a pro boxer,” said Halkias, who adds that the arena has been sectioned to seat about 3,200, and already has a second card scheduled for April 3. Other fighters slated for the card include Frederic Julan (11-0, 9 KOs), a French light heavyweight who is now based in Brooklyn, plus super middleweight Quaseem Carter (2-0, 2 KOs) of Newark, and Jaywon Woods (11-1-1, 5 KOs) of Danville, Va.

In the city where Hilton was once a feared gang member, he’ll now have his name up in lights at the city’s arena.

“A lot of people who knew me when I was in a negative lifestyle, to see me switch up, they’re like, ‘Damn, he doing good,’” said Hilton. “For people to see somebody going from negative to positive, it’s like, if I can do it, you can do it.”