Jermell and Jermall Charlo: How high can they climb? 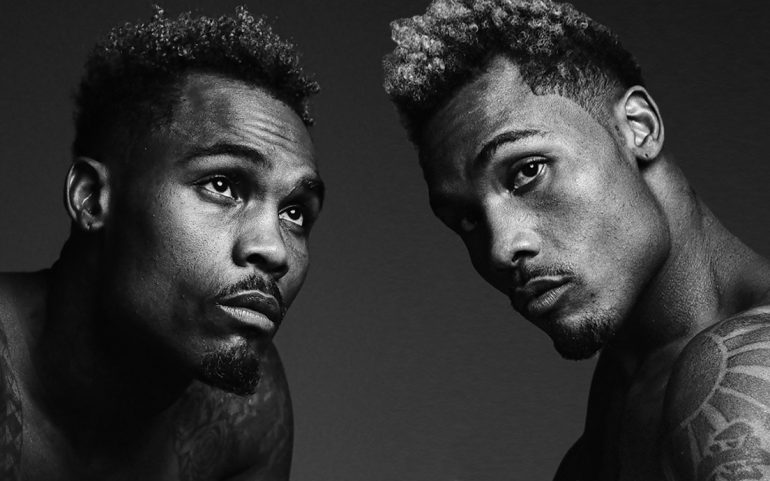 Editor’s Note: This feature originally appeared in the January 2021 issue of The Ring Magazine.

JERMELL AND JERMALL CHARLO HAVE THE MARKETABILITY OF BEING BRASH-TALKING IDENTICAL TWINS AND HAVE SHOWN THEY HAVE THE SKILLS TO BEAT THE BEST, SO WHAT’S HOLDING BACK THEIR RISE TO FAME?

Jermell and Jermall Charlo, identical twins, turned pro respectively in 2007 and 2008. Now 30 years old, they’ve compiled a 65-1 (40 KOs) ring record between them. But they haven’t gone in as tough as boxing fans would have liked and they haven’t become stars. A September 26 doubleheader on Showtime PPV was designed to chip away at these issues and launch them into a higher orbit.

A fighter doesn’t need cruelty to be great. Cruelty implies deriving joy from another person’s pain. Many fighters disassociate themselves from the pain they cause. That’s typical of sports. When a baseball player hits a home run, he doesn’t empathize with the pitcher’s pain. So cruelty isn’t necessary. But it helps for a fighter to have a wellspring of anger to motivate him. And the Charlos have that. 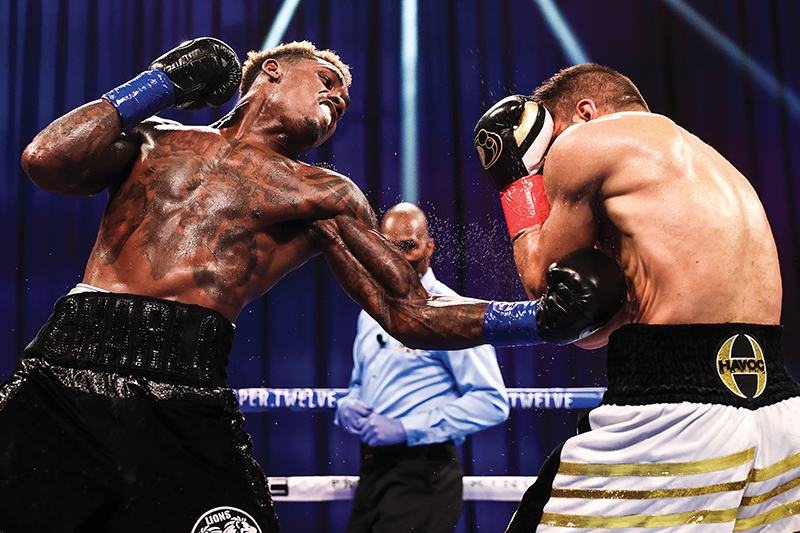 Jermall came into the September 26 fight card with an unblemished 30-0 (22 KOs) ring record and a World Boxing Council 160-pound belt around his waist. But he lacked a signature win on his resume, and Canelo Alvarez is widely regarded as both the real WBC middleweight champion and the best middleweight in the world.

Jermell Charlo (33-1, 17 KOs going in) had previously held the WBC 154-pound title, lost it by decision to Tony Harrison in 2018 and regained it by knocking out Harrison in December 2019.

“Twin power is better,” Jermall has said. “If you don’t like the Charlos, stay out of our lane and keep the hate down.”

The fights on September 26 were contested at Mohegan Sun in Uncasville, Connecticut, without spectators on site. Showtime styled the promotion as a two-part, six-fight pay-per-view doubleheader and charged $74.95 for the show. The fact that the event was on pay-per-view didn’t speak to the Charlos’ marketability. Rather, it signaled that no sponsor would put up enough money for the fight to be televised on Fox, nor would Showtime pay a license fee large enough to cover the fighters’ purses.

The first half of the doubleheader was headlined by Jermall Charlo vs. Sergiy Derevyanchenko with Brandon Figueroa vs. Damien Vazquez and John Riel Casimero vs. Duke Micah on the undercard. Part two featured Jermell Charlo vs Jeison Rosario for the WBC, WBA, IBF and vacant Ring Magazine 154-pound titles preceded by Luis Nery vs. Aaron Alameda and Danny Roman vs. Juan Carlos Payano.

The two Charlo fights were the bouts that mattered most.

Still, there were questions as to how the numbers would add up. Derevyanchenko was guaranteed a purse in the neighborhood of $2.2 million. That was less than the $3 million he’d been offered by DAZN to fight Canelo Alvarez on the streaming network. But DAZN was then unable to get on the same page with Golden Boy Promotions and Canelo to close a deal for that fight. Meanwhile, Rosario would be well-compensated by Showtime and Premier Boxing Champions (which represents the Charlos) for bringing his IBF and WBA belts to the table. That meant the Charlos would be fighting for modest guarantees and hoping for a profitable upside on pay-per-view buys.

“This one is more a roll of the dice than usual,” Espinoza acknowledged.

Derevyanchenko (13-3, 10 KOs before the fight) was a step up in the quality of opposition for Jermall. Sergiy grew up in Ukraine and has lived in Brooklyn since 2014. He’s a tough out and had come up short in losses by decision to Danny Jacobs and Gennadiy Golovkin in fights that could have gone either way on the judges’ scorecards.

“The green color of the WBC belt suits me,” Derevyanchenko said at the final pre-fight press conference for the Charlo doubleheader. “I want that green belt. I’ve fought twice for the title and I’m more ready than ever for the third time.”

That said, Sergiy was 34 years old with the wear and tear of 400 amateur bouts and 15 pro fights on his body. Jermall was a 2-to-1 favorite. 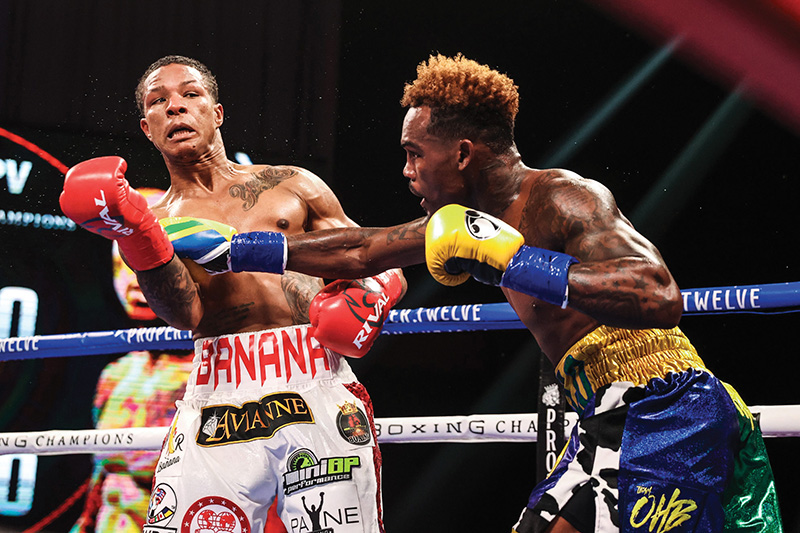 Rosario (20-2-1, 14 KOs going in) had scored a surprise knockout of Julian Williams as a 30-to-1 underdog in January to claim his pair of belts. Speaking through a translator at the final pre-fight press conference for the Charlo fight, Jeison declared, “People are going to see on Saturday that it was no fluke that I beat Julian Williams the way that I did. There’s no room in my mind for the possibility of not winning.”

The clear consensus going in was that it wouldn’t be easy for either Charlo but that Jermall and Jermell would both win.

Charlo-Derevyanchenko was a spirited action fight with Charlo in control for most of the bout. Sergiy kept trying to pressure Jermall but was rarely able to land effectively. Charlo fought a disciplined fight, relied heavily on a good jab and landed the more telling blows. He was more skilled and also more athletically gifted than Derevyanchenko. A succession of jabs opened a cut on Sergiy’s right eyelid in Round 5. A more dangerous cut on Sergiy’s left eyelid that was partially obscured by swelling followed. The decision of the judges was 118-110, 117-111, 116-112 in Jermall’s favor.

“Sort of, it was easy,” Charlo said afterward. “I don’t wanna call him like an easy fight. No fight is easy. It’s always a hard fight. At any given time, anything can change. But we stuck to the game plan and we made it happen. I let my jab dictate and do what it do, and we got the victory. I wanted to knock him out, if that’s what you wanna know. I wanted to knock him out, but you can’t knock out every fighter. I landed the shots that I needed to land to win.” 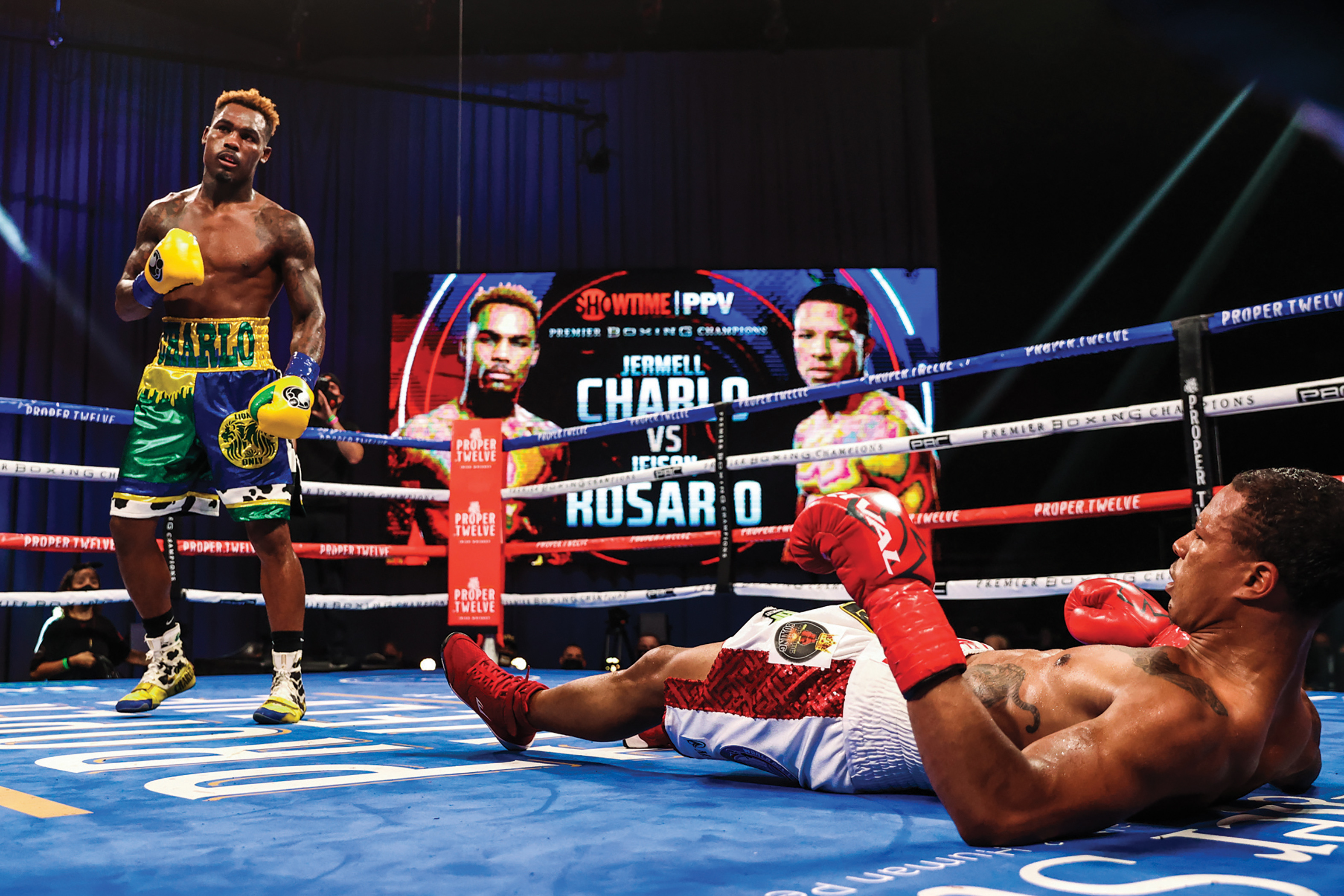 Meanwhile, the defeat was a bitter disappointment for Derevyanchenko, who cried in his dressing room after the bout. “I’m sick of fighting a good fight and losing,” he told those who were gathered around him. “I want to win a title.”

Later that night, seven stitches were etched into Derevyanchenko’s skin to close the cut on his left eyelid. On Sunday, the cut was reopened by a plastic surgeon who restitched it.

Jermell Charlo vs. Jeison Rosario was the second featured fight of the night. Rosario won four of seven rounds on two of the judges’ scorecards and three on the third. But from beginning to end, it had the feel of being Jermell’s fight. He knocked Rosario down in the first and sixth rounds before ending matters on a strange note in Round 8 with a jab to the beltline that, because of its landing angle, might have jammed Rosario’s protective cup into his private parts. As it was, Rosario lay on his back in pain and seemed to be having difficulty breathing.

“I never seen it. Nobody in boxing has seen it,” Jermell said afterward. “Something must’ve been seriously done to him prior to that in the earlier rounds. That’s it. I don’t know. I never seen it.” He later added, “I mean, have you ever seen somebody with a jab to the body, put him out? Man, that’s different. I hit him right in the right spot, took the air out of him. I don’t know what happened, man.”

Three years ago, I wrote, “The Charlo brothers are good fighters. It would be nice if they were matched tougher so we can find out how good.”

Jermell, like his brother, has a good chin, good boxing skills and world-class athletic gifts. He also has three of the four major sanctioning organization belts at 154 pounds and a legitimate claim to being the No. 1 junior middleweight in the world. But like Jermall, he needs better opposition – not belts – to take him to the next level. That could come from above if he moves up to 160 pounds. Or it could come from below, for example if Errol Spence were to beat Danny Garcia and then move up to challenge Jermell.

At the post-fight press conference following his victory over Rosario, Jermell declared, “I hope that we proved all of these haters wrong tonight. I seen a whole lotta yak on that Instagram and on them Twitters and all of them pages and all of that media . . . They don’t understand the skills and the levels of boxing, and that’s what we present.” 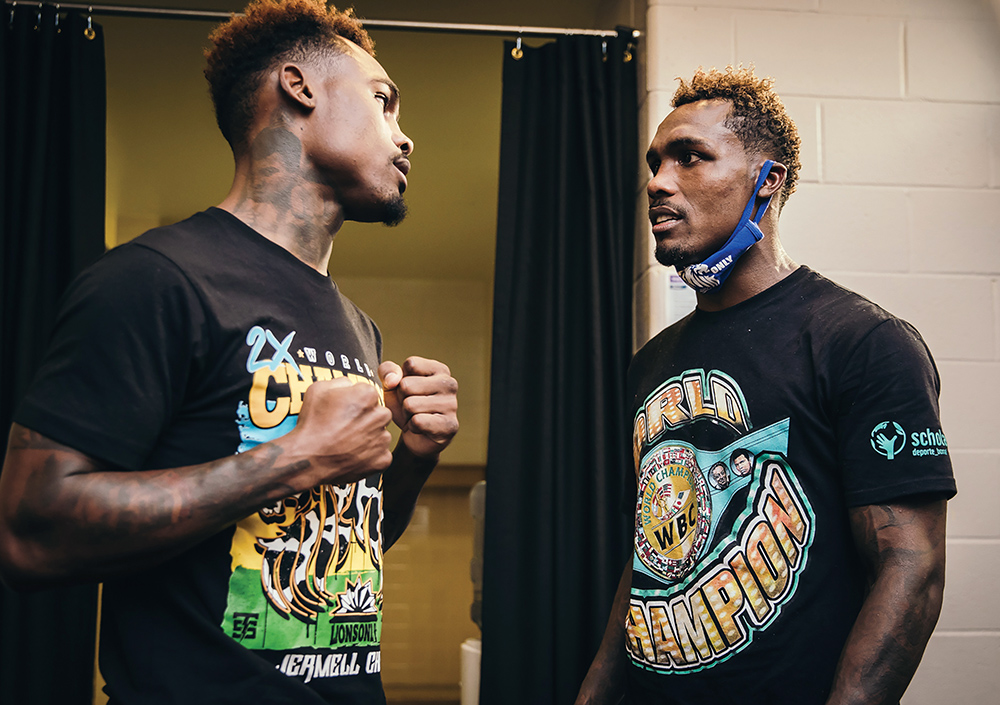 That was followed by the declaration, “We here for it. We here to stay. Everybody in boxing – the Charlo twins are taking the fuck over!”

That was consistent with Jermall’s earlier boast to Ray Flores, “I’m running the show [at middleweight]. I’m driving the boat.”

But while the Charlos will be formidable opponents for anyone they fight, neither has moved the needle in a significant way in terms of marketability. Most sports fans have no idea who they are. Many casual boxing fans don’t know which Charlo is which. Tickets for their past fights have not sold well.

The September 26 doubleheader was a test drive for making the Charlos an ongoing dual pay-per-view attraction. But it was televised within hours of fight cards on ESPN+ (Josh Taylor vs. Apinun Khongsong) and DAZN (Yuniel Dorticos vs. Mairis Briedis). These earlier cards left fans who watched them with a measure of viewing fatigue and cost viewers only a small fraction of what the Showtime pay-per-view cost.

Showtime has not released PPV numbers for the Charlo doubleheader as of this writing and might never do so. But indications are that it drew poorly. The network has been plagued by poor ratings since its return to boxing following its shutdown for the pandemic. One week prior to the Charlo card, a Showtime Championship Boxing telecast headed by Erickson Lubin vs. Terrell Gausha averaged a meager 122,000 viewers. Had the Charlo doubleheader been on “regular” Showtime, it likely would have generated a substantial rating. But economic considerations forced it to pay-per-view.

Thus the centuries-old philosophical question: If a tree falls in a forest and no one is around to hear it, does it make a sound?

Thomas Hauser’s email address is [email protected] His most recent book – Staredown: Another Year Inside Boxing – was published by the University of Arkansas Press this autumn. In 2004, the Boxing Writers Association of America honored Hauser with the Nat Fleischer Award for career excellence in boxing journalism. He will be inducted into the International Boxing Hall of Fame with the Class of 2020.