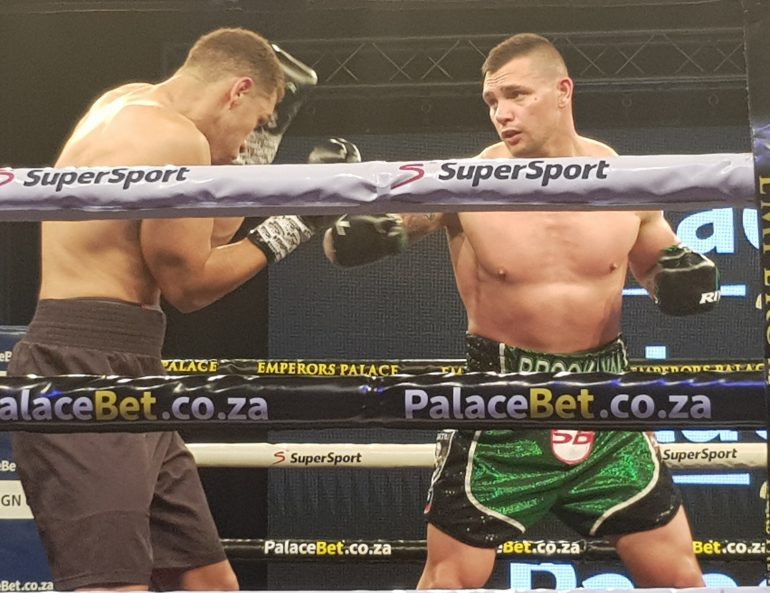 Kevin Lerena, ranked no. 4 by The Ring at cruiserweight, was in cruise control until he put his foot on the gas to stop the outgunned Patrick Ferguson at 1:49 of the fifth round at Emperor’s Palace in Gauteng, South Africa.

Lerena started the fight by stalking Ferguson behind a southpaw jab that he varied to head and body. He landed a hard right hook to the body and seemed to stun Ferguson with a right hook upstairs before the bell.

In the second, another short right hook got the attention of Ferguson, who fought back gamely in flurries which Lerena simply brushed off, catching most on the arms and gloves. Two right hook-straight left combinations had the fighter from Spokane, Wash., looking decidedly uncomfortable as the round ended.

Lerena slammed in hooks to the body, landed the odd right hook to the head and mixed in an uppercut as well over the next two rounds. Every time Ferguson looked to be on the point of being overwhelmed, he responded with a combination of his own but the difference in power was glaring.

A flush right uppercut from Lerena in the fifth kickstarted an explosive combination of hooks. A straight left and another right hook drove Ferguson to the ropes, where Lerena proceeded to pound him relentlessly. With Ferguson, incredibly, still on his feet but leaning over the ropes, referee Tony Nyangiwe had no choice but to wave the fight over.

Lerena, who has gone through a frustrating limbo period with big fights not materializing, a situation worsened by the recent pandemic, now has a new possibility on the horizon. He is ranked third in the WBC’s new 224-pound bridgerweight division. The Ferguson fight was held at a catchweight of 211 pounds (96kg, South Africa is on the metric system, hence the odd number) and fighting for the green belt at the higher weight is an intriguing option, should he be unable to secure a crack at any of the major cruiserweight beltholders.

It was short and sweet, but junior middleweight Roarke “Razor” Knapp stole the show with a spectacular first round knockout of South African champion, Simon Dladla, at 1:58 of the first round.

For such a short fight, there was tremendous two-way action. Dladla, who had won five of his six fights by knockout, came out of his corner with bad intentions, landing a series of hard straight rights. Knapp responded by returning fire, landing a hard left hook of his own. Moments later Dadla seemed to stun Knapp with another right. That served as a wake-up call and Knapp came roaring back, landing a short left hook, flush on the chin of Dladla during an exchange. Dladla went down on his back, his eyes rolling in their sockets. He somehow clambered to his feet, but it was too late, referee Simon Mokadi counting him out as he was rising on rubber legs.

Knapp, who is becoming ever more popular among South African fight fans, moves his record to 11-1-1 with nine knockouts while Dladla drops to 6-1.

The other story of the night was the resurrection of veteran warhorse, Johnny Muller, who upset the applecart by handing highly touted prospect Akani Phuzi his first defeat, winning a unanimous 10 round decision by two scores of 98-91 and a third card of 97-92. The fight was the second semi-final of a four-man cruiserweight tournament.

The favorite to win the tournament, things started going south for Phuzi as early as the first round. Muller came out behind his jab and caught Phuzi napping, stunning him with a left hook, shortly thereafter depositing him on the canvass with a big right. Phuzi got up but a Muller overhand right drove him to the ropes and he was in trouble as the bell sounded.

Phuzi tred to come back in the next round, forcing Muller to the ropes, but the veteran stayed calm and went back to his jab. Phuzi landed a solid right and a left hook later in the round but Muller kept at it and from the third onwards proceeded to give the younger man a boxing lesson, stunning him with a combination punctuated by a big left hook towards the end of the round.

Phuzi tried to get some distance but seemed gun shy, unable to sustain any offence bar the odd shot here and there. Muller used his jab, banged in the right every so often and worked away with hooks to the ribs of Phuzi when in close.

Phuzi had a better round seven, landing several eye-catching hooks while stepping around Muller, but Muller simply responded by working him over in the corners and on the ropes. Muller showed his savvy by coming on strong at the end of every round, a short right at the end of the ninth stopping Phuzi in his tracks.

Phuzi needed a knockout in the last round but Muller never gave him the chance, outpunching him three to one.

Muller, who has not looked this good in years, is back in the win column, bringing his record to 22-9-2 with 14 knockouts, while Phuzi drops to 11-1 and will have to regroup. Muller will now face Lebo Mashitoa in the final.

Welterweight prospect, Jabulani Makhense, kept his unbeaten record intact, improving to 11-0 with five stoppages by winning a ten round unanimous decision over Kuvesa Katembo by scores of 96-94 and identical cards of 98-92. However, it was not the expected showcase win and Makhense failed to impress in what was a mauling, scrappy affair with lots of wrestling and holding, head clashes and even an attempted throw down or two by the fighter from the Democratic Republic of the Congo.

To be fair, Katembo, who dropped to 13-4-1, is the sort of unorthodox rough-and-tumble spoiler who is almost impossible to look good against.

He kept jumping in with a wild lead right and then proceeded to hold Makhense, the fighters pushing each other around, landing cuffing punches. It was up to Makhense to find gaps in between those lunges and mauls and he did that occasionally, landing the odd left hook or jolting jab as he tried to time Katembo’s rushes.

Makhense landed a good left hook and follow up punches in the fifth before getting stuck in another protracted clinch, referee Simon Xamlashe seemingly unable to separate the fighters and losing control for large portions of the fight. Makhense timed his shots a bit better as the fight wore on, sending the sweat spraying from Katembo’s head with a hard uppercut at the end of the eighth, a flush right on the chin in the next round and a left hook-straight right combination followed by another left hook in the last round.

Junior bantamweight, Ricardo Malajika, also kept his “0” intact, improving to 7-0 with five knockouts, winning a ten-round decision over Rofhiwa Nemushungwa by two scores of 97-93 and a third card of 98-92.

This too, developed into a scrappy affair with lots of holding and shoving. The pair exchanged furiously on the inside during the first round, Malajika landing the harder shots, especially to the body.

In the second round, the switch hitting Malajika settled in the orthodox stance whereas Nemushungwa fought mostly as a southpaw. Malajika landed the harder shots in the form of sweeping uppercuts to the head and body while Nemushungwa responded with hooks, mostly to the ribcage of Malajika before they fell into a clinch. Nemushungwa had a good third, landing body shots and a left uppercut in between the clinches.

This pattern kept repeating itself until Malajika got on his toes in the fifth round, pot shotting with a lead right and occasional sweeping left hook. Malajika started to time Nemushungwa’s rushes with a hard right uppercut but there was no follow up and his success was followed by more holding. A consistent jab was conspicuous in its absence.

Nemushungwa, who dropped to 12-7-2, pushed hard in the last round but it was too late. The winner was never in any doubt.

Malajika is undoubtedly athletically gifted but he still has a long way to go before he can be considered a well-rounded pro. Lucky for him, time is on his side and fights like these can be a good learning experience.

The card was presented by Golden Gloves Promotions of Rodney Berman in conjunction with DiBella Entertainment.