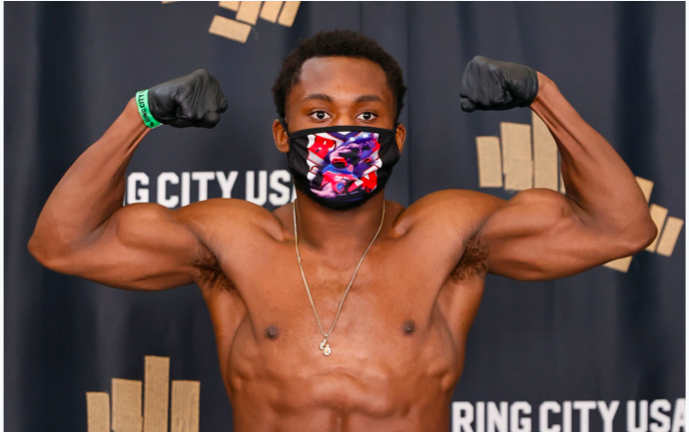 It’s not as if unbeaten junior middleweight Charles Conwell needed any extra motivation to round out 2020, but after watching his stablemate and friend Teofimo Lopez defeat Vasiliy Lomachenko to become the lightweight king it dawned on Conwell that he can achieve anything he wants to inside the ring. 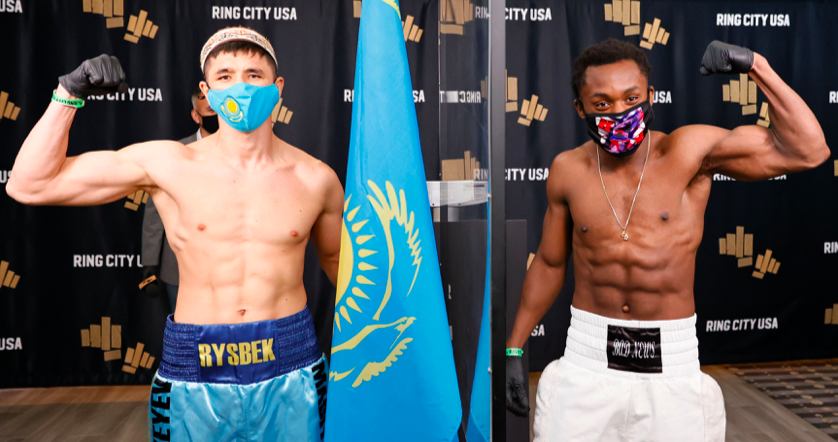 The RCUSA main eventers Ashkeyev (left) and Conwell made weight Wednesday ahead of their Thursday clash. (Photo by Tom Hogan)

“I am excited to get the exposure and notoriety that comes with getting the win, ” Conwell told The RING. “After I win again on a national stage I will be ready for what comes next.”

Conwell is fresh off a dominating stoppage victory over Wendy Toussaint in October on the “Shobox” series on Showtime and relishes the opportunity to make the quick turnaround fight again two months later.

“I know what I am capable of and I love to stay active,” Conwell said. “I know Ring City USA is looking for good talent who can make the leap to stardom and I am honored they see me as that person. They know I will be a world champion in the future.”

In Ashkeyev, Conwell knows he may be facing the stiffest test of his pro career and a win on Thursday will set him up for bigger opportunities in 2021.

“I prepared for him as best as I could during the pandemic,” Cowell added. “I know as much about him as YouTube can tell me. He is a very game fighter with a long amateur background and I know he is coming to win just as I am.”

Conwell said aside from the difficulty in finding sparring partners his training routines haven’t been impacted much by the Covid-19 protocols.

“I know what it’s like to not be able to train due to injuries or inactivity so I did not let anything stop me from being 100% ready for this opportunity,” Conwell said. “I need this win but I also need to be dominant so I can get a world title challenger and a big name on my resume next year.”

Conwell is managed by David McWater, who also manages fellow 2016 Olympian Lopez and Conwell is drawing on Lopez’ huge win over Lomachenko as inspiration.

“Teo motivated me a lot because we come from the same place, same time and same era,” Conwell said. “Seeing him accomplish such a high milestone in his career was great. If he can do it so can I. I know how hard he works and how hard I work.”

It’s been over a year since that fateful evening when Patrick Day lost his life following the knockout loss to Conwell and although the Cleveland native considered hanging up the gloves he ultimately decided to serve as an example for those suffering mental health issues.