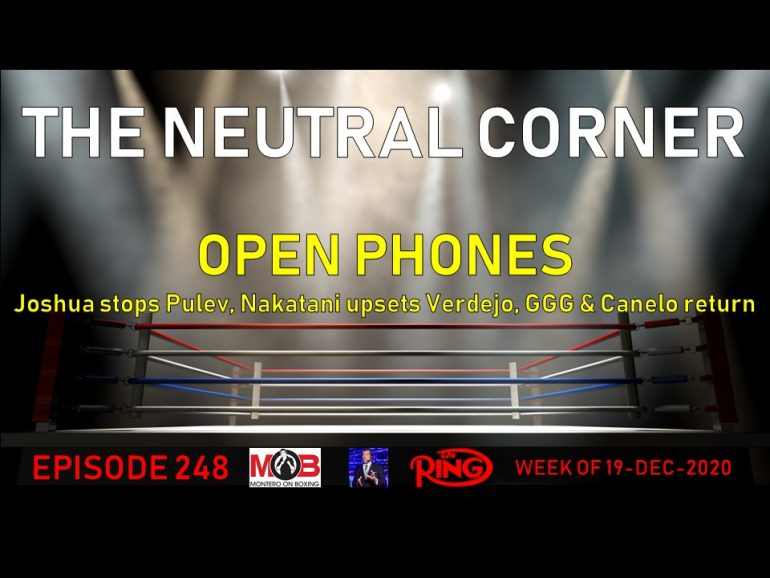 On episode 248 of The Neutral Corner boxing podcast, host Michael Montero sounded off on incompetent judges in the sport. Last weekend, Robeisy Ramirez scored a TKO6 win over Brandon Valdes on the Stevenson-Clary undercard in Las Vegas. Ramirez dominated the fight, and two judges had him wide ahead at the time of the stoppage. Curiously, Adalaide Byrd had Valdes up 48-47. This was not the first questionable scorecard from Byrd in recent years.

Montero argued that even though this particular scorecard did not affect the outcome of the fight, it’s only a matter of time before we see a replay of Byrd’s infamous 118-110 score for Canelo Alvarez in the first Canelo-GGG fight in 2017.

This issue will not fix itself. Montero implored promoters, managers, trainers and even fighters themselves to push back on commissions when they try to assign inept ring officials to fight cards.

Saturday, December 12 was a busy day of boxing in both the UK and USA. In London on DAZN, Anthony Joshua dropped Kubrat Pulev three times, stopping him in the ninth round to defend his unified heavyweight titles. After the fight, promoter Eddie Hearn claimed he will begin negotiating with Tyson Fury’s promoter Bob Arum to make a super-fight between the two best heavyweights in the world.

In Las Vegas, Shakur Stevenson scored a dominant unanimous decision win over Toka Khan Clary. In the co-main, Masayoshi Nakatani got off the canvas twice to beat Felix Verdejo in a fight of the year candidate. Super middleweight prospect Edgar Berlanga kicked off the ESPN tripleheader from Top Rank with another first round knockout. Berlanga is yet to see the second round as a pro.

In Connecticut, undefeated junior lightweight prospect Chris Colbert scored a TKO11 win over Jaime Arboleda in the main event of a PBC card on Showtime.

@3:00 yet another rant on judges in boxing