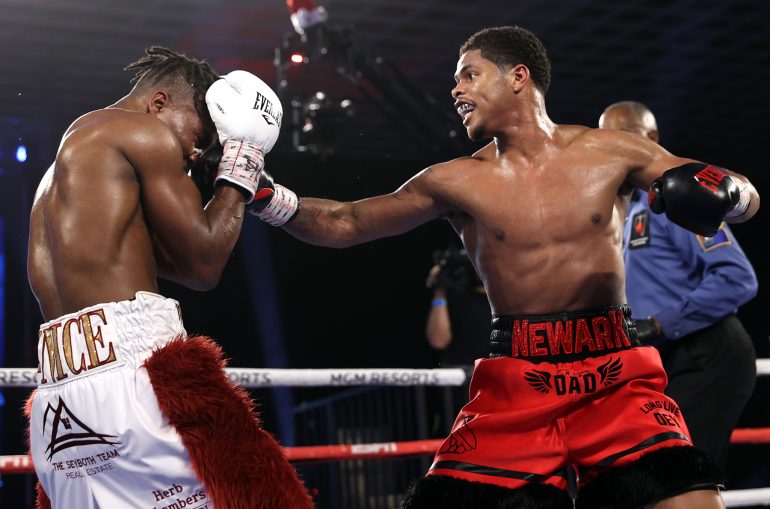 Shakur Stevenson scored a dominant, unanimous decision victory over an outgunned Toka Kahn Clary tonight in a junior lightweight battle of southpaws. The winner of the ESPN main event from Top Rank was never in doubt. All three judges scored it 100-90 in favor of Stevenson, who improved to 15-0 (8 knockouts).

“He had a lot of experience and knew how to survive,” said Stevenson after the fight.

When asked about his plans for 2021, Stevenson made it clear. “I want the WBO belt first. The winner between (current WBO 130-pound titleholder) Jamel Herring and Carl Frampton has to come see me. After that, we’re going to go straight to Miguel Berchelt.”

Berchelt was originally scheduled to face Oscar Valdez tonight, but that fight was scrapped when he tested positive for COVID-19 last month. When Berchelt-Valdez fell apart, Stevenson told his management he was willing to step in. That’s how the fight with Clary came to fruition.

The 2016 Olympian was in complete control throughout. Stevenson beautifully mixed combinations upstairs and downstairs, without taking much return fire. Clary (28-3, 19 KOs), a veteran fighter based out of Providence, Rhode Island, did little more than survive.

Stevenson is currently rated no. 1 by the WBO at 130 pounds. As he mentioned after beating Clary, Herring is set to fight Frampton early next year. Stevenson would be in line to face the winner next. He also called out Mexico’s Miguel Berchelt, the current WBC titleholder and no. 1 rated junior lightweight by The Ring. And then there’s Vasiliy Lomachenko, who has hinted about moving back down to 130-pounds.

Whether it’s Herring, Berchelt or Lomachenko, there are plenty of big fight options for Stevenson going forward.