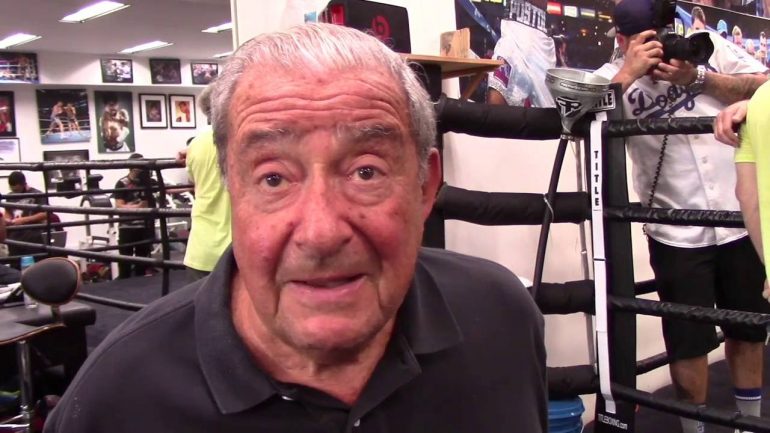 Promoter Bob Arum is not universally beloved in the boxing arena.

Course, nobody at the top of a profession like this one is going to be adored across the board. The Brooklyn-born deal-maker is unafraid to have haters take shots at him, and at 89, is as pugnacious, at times, as he’s ever been.

Speaking from California, “The Bobfather” took aim at a report from young gun reporter Mike Coppinger. If you haven’t seen it, Copp posted a story to The Athletic reporting the success of the Saturday pay per view event put together by PBC and FOX which was topped by an Errol Spence v. Danny Garcia welterweight clash.

“Errol Spence Jr.’s victory over Danny Garcia on Saturday, a PBC on FOX pay-per-view, generated in excess of 250,000 buys, sources tell The Athletic,” the writer reported.

That number, “in excess of 250,000,” didn’t match what Bob Arum has discerned from speaking to his myriad sources within the industry. Arum went on the record here speaking about how he perceives consumers reacted to the Spence-Garcia PPV. That story posted after a Wednesday chat with the promoter, from his residence in California.

And in a Thursday follow up, Arum’s perception hadn’t shifted, he told me.

“We know approximately, they’ll be lucky to get 120,000,” he told me. “We’ve just gotten to the point where the numbers being used are not realistic. They don’t reflect reality. Remember, this is the Trump era. People are willing to say anything, and people will believe it. But to be so off is crazy,” he said, of the Coppinger numeral. “The Athletic has the Donald Trump of sports reporters!”

One could argue that all this is much ado about not nothing, but not anything that warrants excessive time and energy expended. Perhaps so. But we are talking big bucks, and high stakes. How popular a performer is, how much attention he can draw, how many people will pay to watch him perform, it is meaningful in how his market value is set. And a Spence, there’s a difference in his “value” if in his last outing he attracted 120,000 or so buyers to see if he could pull off a miracle comeback post car-crash, or more than 250,000 buys were tabulated. At $75 a pop, we are talking major league dollars. And PPV numbers can be used as levers in leveraging in negotiations, too, so it can affect what fights we may or may not see going forward. So, it isn’t simply idle chatter we engage in when we choose to report on PPV buy tallies.

Arum has not been shy, on the record, in the last few months talking about how he thinks the sport isn’t helped by how many solid fights are being offered on a a pay per view basis, and, frankly, as a consumer/fan, I am inclined to agree. Especially during the pandemic, what with the unemployment rate being what it is. I like to be transparent, as often as is possible, that’s why I share my stance with you.

Also, boxing, as a “renegade sport,” must generate revenue in ways that more accepted sports don’t have to consider.

In other words, this is a nuanced topic.

So; you can take aim at Arum if you think he’s off base with an assertion, or what have you. Plenty of you did when you noted that his intel was off when he spoke about Spences’ potential for fighting again after his car crash. And he’s willing to take those hits. I like that construct, when I use an on-the-record source in a story, I think it’s the way things should be, ideally, most of the time. Because all this, even though the stakes are high, they are not Watergate-high.

It’s a strange era we are in, because everyone can, if they like, start their own “channel,” they can share news or opinion on social media, and if the material is alluring, it will find an audience. One might think that would encourage MORE on the record statements, but not so.

Moving forward, I’d like media, and I’m for sure talking outside the small sandbox that is boxing, as well, to seek to collect as many on the record sources as possible, because that will make things simpler.

And, let’s not make it seem like Coppinger is the only one that relies heavily on unnamed sources for many scoops, he’s simply the person most known for the practice, in our sphere. Using unnamed sources became a flashpoint for discussion after it was understood that “sources” like Dick Cheney played journos like fiddles as they sought to build a case for detonating Iraq, in 2003-2005. To be honest, a re-examination of the practice is past due, but we are playing Whack-A-Mole here, in America, so it’s not likely to be on the docket in the near future.

Anyway, the post Trump-era kicks off, whether Donald likes it or not, January 20, 2021, and no doubt, media should have some lessons learned from the last five years processed, and change some elements of our coverage. This source says the usage of unnamed “sources” would ideally be more rare of a practice than it is now.