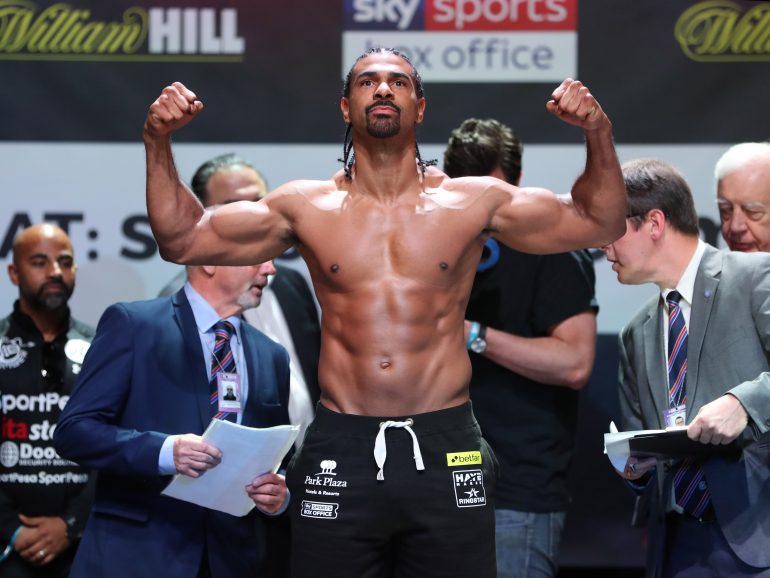 Haye was the born in Bermondsey in the South East of London on October 13, 1980. He is the middle child of three.

“I had a great childhood, lots of adventures,” Haye told The Ring. “Everyone was in the same boat, everybody lived on the same council estate, it was a nice community. I had quite a big family unit.

“I was interested in boxing from the beginning. My family were all boxing fans, so you follow what your family like. Everyone was always talking boxing and watching boxing.”

Haye grew up watching Mike Tyson and Roy Jones Jr, as well as top British fighters of the day: Nigel Benn, Chris Eubank and Michael Watson. He joined the well-regarded Fitzroy Lodge ABC when he was 10 years old and boxed there for the entirety of his amateur career.

Haye, who had in the region of 70 amateur fights, narrowly missed out on the 2000 Olympics when he lost to future professional rival Giacobbe Fragomeni in qualification. The highlight of his time in the amateurs came when he won bronze at the 2001 World Championships.

The Londoner decided against signing with a big-name promoter and set about making his own way in the professional ranks when he turned over in December 2002.

Haye’s vaunted power was very much in evidence from the outset. His first 10 fights lasted a combined 20 rounds and included a third-round smoking of former IBF titleholder Arthur Williams.

Next came another former titleholder Carl Thompson in October 2004. Early on, Haye seemed on his way to a convincing victory, but the savvy veteran survived the storm and Haye punched himself out. Exhausted, he was pulled out in the fifth.

Haye bounced back with four stoppage wins before knocking Alexander Gurov cold in just 45 seconds to claim the European title in December 2005.

After two successful defenses a more mature Haye was matched with old rival Fragomeni in a WBC final eliminator.

“[Fragomeni] was a guy who had a tricky, awkward style,” explained Haye, who stopped the Italian in nine rounds. “He was able to cut my eye badly in the seventh round. I had to really dig in deep. It was one of my first blood and guts fights where I had to go soul-searching. It was very gruelling. I took a lot of shots and dished out a lot of shots.” 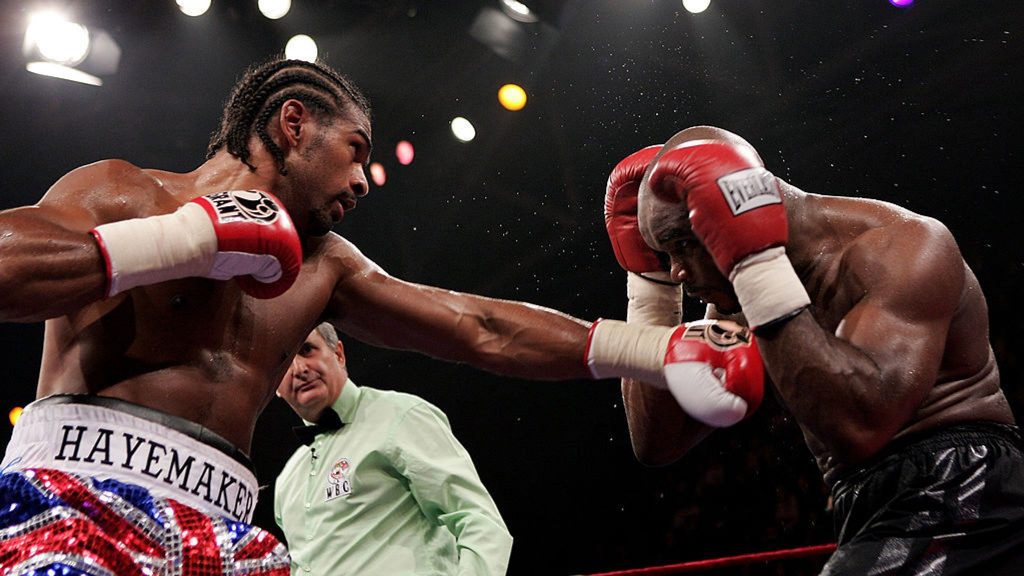 Haye took a stay busy fight up at heavyweight and awaited his next opportunity. When it came, he had to travel to France to face Ring Magazine cruiserweight champion and WBA/WBC titleholder Jean-Marc Mormeck in November 2007.

“His style was a bit of a leach; he walks into range and allowed his opponents to tee off on him,” explained Haye. “When people get the opportunity to land punches against the guy, they keep punching and that’s his thing. He allows his opponents to punch themselves out in the early rounds and then in the second half of the fight, that’s when he used to take over.

“Knowing this, I had to stay in the fight without exerting too much energy in the first half. From Round 7 onwards I started to pick up the pace and finish strong… try to get him out of there late. But as soon as I pushed the pace in Round 7, I was able to knock him out.”

With his days at cruiserweight limited he was able to further unify the division by adding Enzo Maccarinelli’s WBO strap, stopping the Welshman in two rounds.

Haye relinquished all his titles and moved full-time to heavyweight, halting fringe-contender Monte Barrett in the fifth round of an explosive encounter.

From there, in something of a modern-day David and Goliath, Haye met heavyweight leviathan Nikolai Valuev in Nuremburg, Germany for the WBA title in November 2009.

“He was so tall and I had such fast feet, it was a different type of fight,” said the Englishman of his game plan. “Valuev punches long and anybody who punches long gives me time to move away from them.”

It was close on the cards, but Haye made history by claiming a 12-round majority decision win. 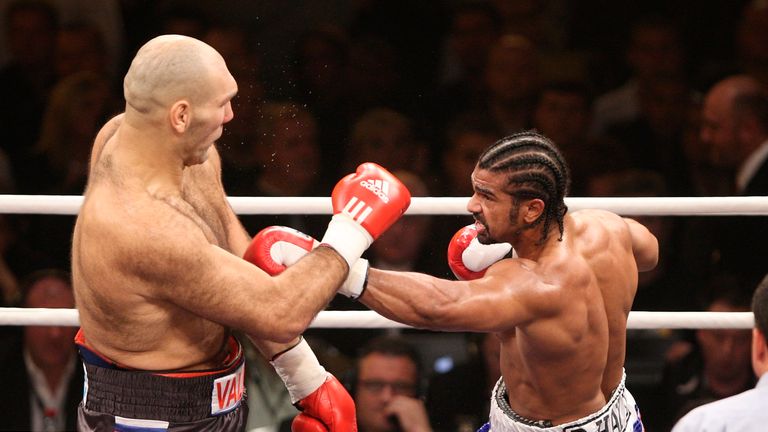 Haye was dwarfed by the colossal Valuev. Photo courtesy of Sky Sports

“There wasn’t that many punches, it was all tactical,” said Haye, who lost a wide unanimous decision. “When I got into range there was no punches, there was just him clinching me, keeping me at the end of the jab, and trying to catch me with a long right. I’m throwing overhand rights and he’s moving his feet away. It wasn’t that hard, it was just very frustrating.”

Haye attended the Vitali Klitschko-Derek Chisora fight the following February. At the post-fight press conference, the two Brits came to blows in a now infamous melee.

Both men were suspended by the BBBoC but, using a bizarre loophole, they picked up licenses from the Luxembourg Boxing Federation and met at Upton Park, London in front of 40,000 fans in July 2012.

“I remember watching the Evander Holyfield-Mike Tyson fights and Evander was able to push Tyson back,” explained Haye, who stopped his compatriot in five rounds. “I remember taking the blueprint from that.

“Chisora is going to think that I’ll use my superior long-range boxing skills, which will mean I’ll be running away from him. I did the polar opposite.”

Injuries led to two scheduled dates with Tyson Fury falling through, and Haye was out of action for three-and-a-half years.

He returned with a brace of low-key wins and had his first big fight in March 2017 against Tony Bellew, who had vacated his WBC cruiserweight title and stepped up to heavyweight.

Haye, who suffered an Achilles injury, was stopped in 11 rounds and when they met in a direct rematch 14 months later, Bellew stopped him in five. Although he looked a shadow of his former self, the former champion refused to make excuses.

“It’s being unfair to Tony, he can only fight who’s in front of him,” said Haye. “He was giving away some natural size, he was a massive underdog, no one gave him a shot, and he managed to pull it around.

“Whether I was prime David Haye or not, that was nothing to do with him. If I didn’t feel I was the fighter I was, I shouldn’t have been in the ring. I felt that I could put fourth an effort good enough to get the victory.”

The former champion retired with a record of 28-4 (26 knockouts).

Haye, now 40, lives in London and has a son named Cassius. He keeps himself busy managing heavyweight contender and former opponent Chisora and is a pundit for both Sky Sports and BT Sport. Away from boxing, he is a professional poker player.

“I’m sponsored by Grosvenor Casino to fly around the world and play poker tournaments,” said Haye. “It’s fun, I enjoy it, and it keeps me very busy.”

Haye kindly agreed to speak with The Ring about opponents he faced.

BEST JAB
Wladimir Klitschko: His jab, I believe, was his biggest weapon. He was able to keep me and the majority of his opposition at arm’s length. He’s a tall man at 6-foot-7. He used his jab, particularly after working with the great coach Emanuel Steward. It was the one thing I really had to look out for.

BEST DEFENSE
Jean-Marc Mormeck: I was very surprised at how difficult it was to pry open his defense. He was a come forward fighter, he had very high held hands and was able to parry and block a lot of shots. He was quite a solid turtle-like shell to penetrate. I had to work heavily to his body, leave him in fear of the body assault, to slowly pry the hands away from his face and then I was able to go over the top.

BEST HANDSPEED
Enzo Maccarinelli: He had very fast hands. When I fought him, he was the WBO champion, coming off a long string of title defenses and he was a handful. I knew that his fast hands were very dangerous, and when I was in there I had to be really switched on, timing and speed-wise. I really had to step my game up.

BEST FOOTWORK
Klitschko: He had very good footwork. Whenever I launched my attacks, he was able to bring his feet out of the danger zone very quickly. His jab and his footwork have seen him through multiple world title defenses, and I can see why many heavyweights, particularly with slow, ponderous feet, weren’t able to build any momentum when they fought him.

SMARTEST
Tony Bellew: Tony Bellew had a great boxing IQ and formulated a very good game plan with (trainer) Dave Coldwell. They knew what their strengths and weaknesses were, they knew what mine were, and they had a great game plan and were able to execute on two occasions.

STRONGEST
Derek Chisora: Definitely Chisora, he was very strong, and it took a big effort in training camp to get myself physically in the right place to walk Derek Chisora back. That, for me, was very important in that fight.

BEST CHIN
Nikolai Valuev: I hit him with some of my best punches and all I managed to do was break my hand in the process. He has this thing called Gigantism where his bone structure is significantly thicker because his body releases more growth hormone, so his skeleton system is significantly thicker than other people. Up until the last round , I didn’t feel like I was hurting him (Haye shook Valuev in the 12th).

BEST PUNCHER
Monte Barrett: I remember him hitting me and being shocked at the difference in punch power between him and the cruiserweights. He was a very heavy-handed guy.

BEST BOXING SKILLS
Mormeck: He was well-rounded, he could take a shot, he could punch hard. He knocked me down. I could see him thinking the whole way through the fight. He was hoping I would run out of steam, but I was trying to conserve myself throughout the first half of the fight to push down the final straight. I definitely felt in the early rounds that he knew what he was doing. I could feel his boxing IQ.

BEST OVERALL
Klitschko/ Valuev: Either Wladimir Klitschko or Valuev, one of those two. I’d love for them to have fought each other. I’d love to have seen how Wladimir would have dealt with someone a lot bigger than himself. He always seemed to have the physical advantages over people. It’s a mixture of the two, they’re the two most difficult, they had such physical advantages over me. I was able to implement my plan significantly better against Valuev. If I fought Wladimir the same night I fought Valuev, I believe the result may have been different. I knew that wasn’t the best of me. It’s very close between Wladimir and Valuev. It sounds crazy because I lost to one and beat one, but the fights were at different times in my life. Lots of things were different before both of those fights. To be fair to both of them, I’d say 50-50.