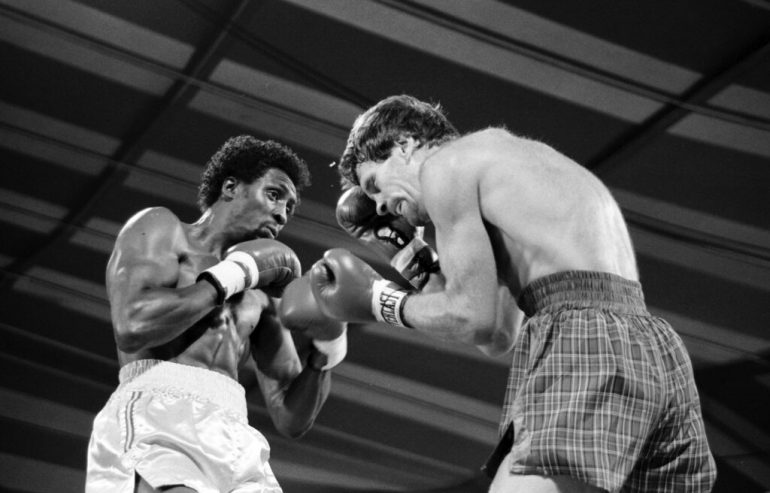 Sutherland takes on Hearns in 1983. Photo from The Ring archive
23
Nov
by Tris Dixon

There aren’t many who would describe fighting a prime Thomas Hearns as ‘convenient’. But for Canada-based Scot Murray Sutherland, he was in the right place at the right time.

He’d actually opted to move down to middleweight. Having fought 175-pound monsters like Matthew Saad Muhammad and Michael Spinks, Sutherland realized that he just wasn’t big enough to hang with the juggernauts of a packed light-heavyweight class. Eventually he’d win the first world title at 168 pounds (IBF), but before then he’d dropped down to 160 where he’d spend a couple of years taking on all comers, as was his mantra.

He defeated Mario Maldonado, lost to JB Williamson and drew with Robbie Sims before posting a May 1983 victory over Frenchman Jean Marie Emebe, which he refers to fondly as the best night of his career.

“The Emebe fight was scheduled and then postponed,” recalled the 67-year-old of why the date moved. “I’d been running, got home, took my socks off and tried to go down the basement stairs, slipped and fell down the stairs and hurt my back. The fight was the 27th of May, my son was born premature and my wife had to have a caesarean. He was taken about 20 miles away from us because it had to be on a neo natal unit and my wife was here in hospital. The week prior to the fight, I was getting up and going for a run, going to visit my wife in hospital, then going to visit my son in the neo natal unit and his lungs hadn’t formed… Long story short, most of the day was spent running around and I was training, I was in shape, but I was exhausted. I landed in Rhode Island at four in the afternoon and slept until seven the next morning out of exhaustion, then I had to step in the ring that Friday night. This was Wednesday.

“For the first six rounds I got my ass kicked. I would go back to my corner and my trainer asked me if I was alright and I said, ‘Yes, I’m just tired.’ He said, ‘You better start fighting soon because this guy’s kicking your ass.’ I must have got my second wind or something and he was tiring. I started pushing him back, he got all flustered and then the bell went. I went back to my corner and my trainer said, ‘Push this SOB back, he’s ready to go, just pour it on him, you’ve got two rounds left, just get him out of there.’ So I went out in the ninth round, hit him with a good right hand and he kind of staggered backwards and I took it in high gear and actually knocked him out of the ring. That was probably the most emotional, toughest fight I ever had.” 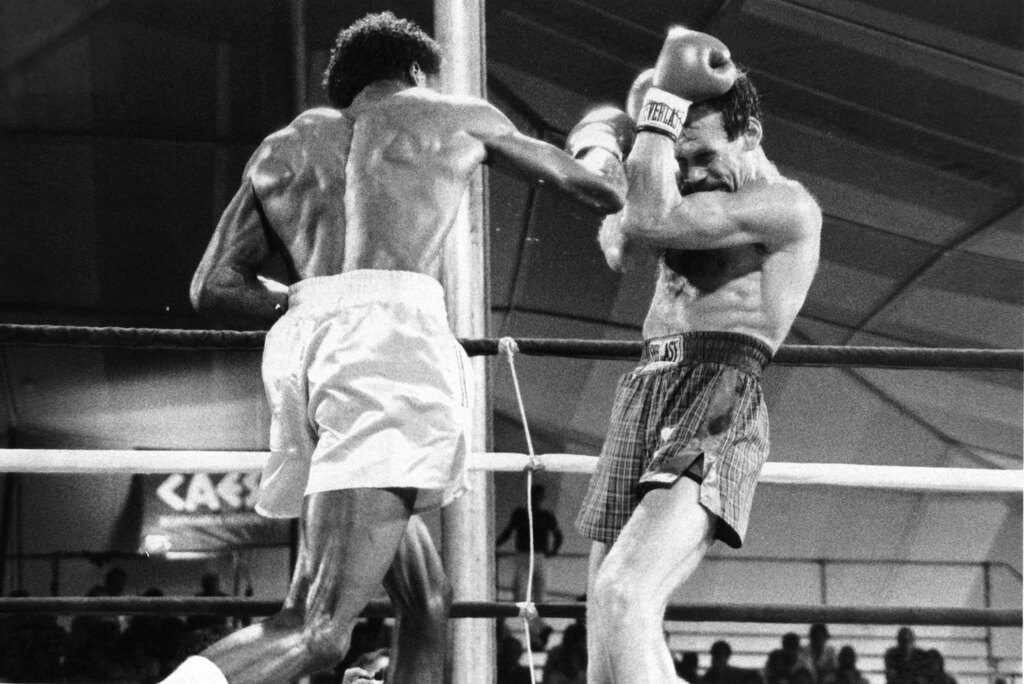 Hearns lands a right hand against Sutherland. Photo from The Ring archive

Only a few weeks later and Sutherland, whose career wound up with 47 wins against 14 losses and a draw, took a call. They needed an opponent for Tommy Hearns.

“It was convenient,” explained Sutherland. “Tommy was originally due to fight James ‘Hard Rock’ Green, but he was hurt in sparring and I took that fight on 14 days’ notice. My manager called me up one day and said, ‘Murray, how would you like to fight Tommy Hearns?’ I said, ‘Absolutely, when?’ And he says, ‘Two weeks from now. I said how much? He said, ‘$35,000’. I said, ‘Take it. Do it’. I was always in shape, I just said get me a decent sparring partner in here for the next couple of weeks and we’re all set. That’s how it worked. My manager knew he could call me up… the first Michael Spinks fight I took on five days’ notice and I only made 15 grand for that fight. That was the purse. The second payment for Spinks I made $60,000.”

Hearns’ reputation was as a puncher but Sutherland, who fought something of a who’s who of boxing, said Hearns was more than that. Murray raved about his jab, his ring intelligence and his defence. He’d fought on a Hearns bill earlier in his career, so he knew all about the Kronk man. He’d even followed him back in the amateurs when people started to make a noise about The Hitman, who Sutherland reckoned was the complete package as a fighter. Hearns was coming off a 15-round majority decision win over Wilfred Benitez heading into his 10-rounder with the Scot.

And Murray had already experienced the Detroit man’s class first-hand.

“I respected Hearns a lot because I’d trained with him in the Kronk and we’d sparred quite a few rounds,” remembered Sutherland. “Picking the fights is all secondary to what the managers want, so I could hope to fight so and so but if the promoters aren’t going to pay for it, you aren’t going to get the fight. It doesn’t matter if you’re good enough, you can beat him or whatever, it’s all about money.” 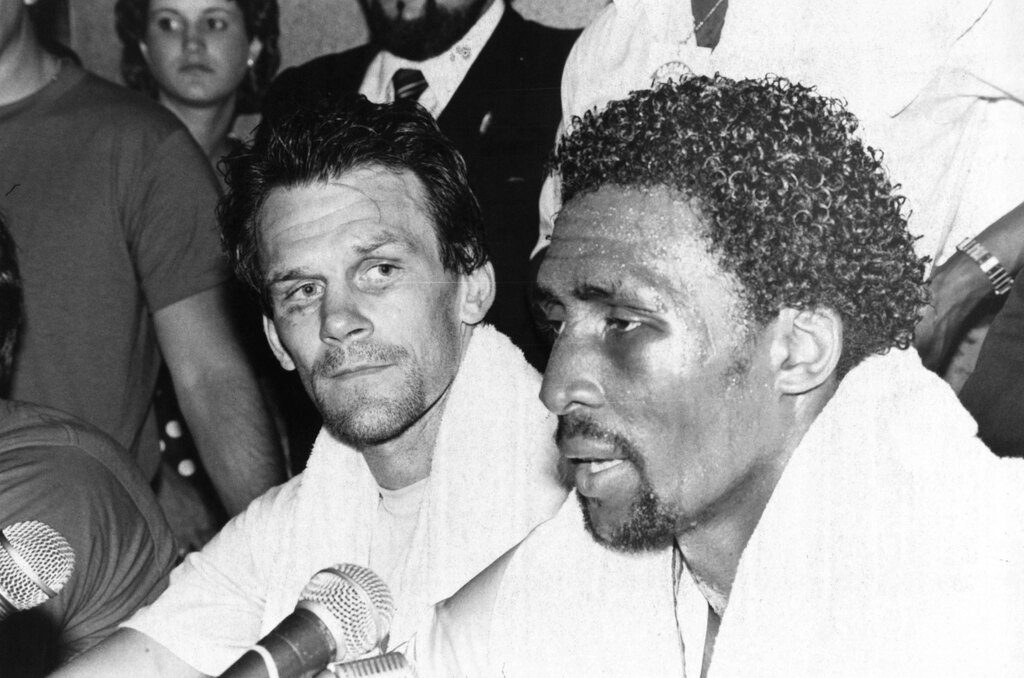 Murray always understood the business. In fact, there was another meeting in the famous Detroit gym when Sutherland was introduced to Harold Smith A.K.A. Ross Fields, the promoter who embezzled more than $20million for Well Fargo to become one of the sport’s leading promoters before winding up in prison. Smith was close to Kronk guru Emanuel Steward, Hearns’ trainer.

“He paid me pretty damn good,” smiled Sutherland of his fights for Smith back in the early 1980s. “I actually met him in the Kronk Gym in Detroit when he was messing around with Emanuel Steward. He brought all these titles for Emanuel [‘s fighters]. He was the one who got Pipino Cuevas to come up and fight Thomas Hearns in the Cobo Hall.”

But it was just business for Sutherland, who capped off 1983 with victory over Alex Ramos and a loss to James Kinchen – both fights over 10 rounds.

It was a busy and successful year for Sutherland. He didn’t win them all. Hearns beat him by scores of 10-0, 9-1 and 7-2 when they met in Caesars in Atlantic City but Murray left the sport satisfied three years later. There was no one he didn’t face.

“If I wanted to fight them, it was only because there was a lot of money involved,” he smiled.

The Hearns sums added up. It was happily convenient.