Malik Hawkins: If you fight him back, Subriel Matias is more of a B or C-class fighter 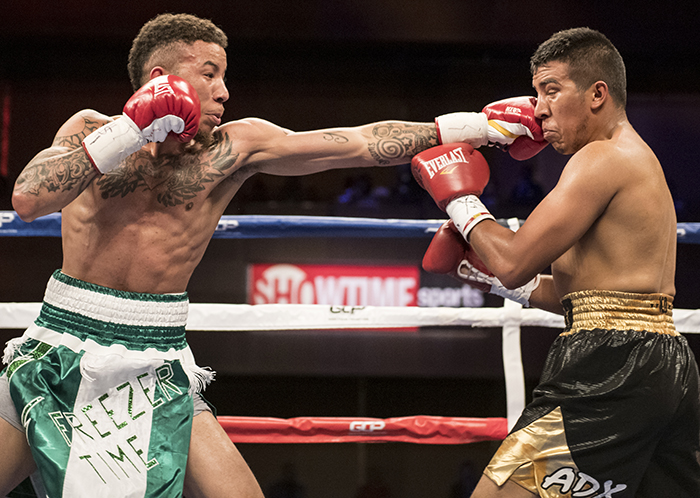 Unbeaten junior welterweight Malik Hawkins did not make a good impression in his first televised bout as a pro but he believes there is more to him than just one fight.

Hawkins will face Subriel Matias on Saturday at the Mohegan Sun Casino in Uncasville, Connecticut. The 10-round bout will open the three-bout Showtime telecast (9 p.m. ET/ 6 p.m. PT), which will be headlined by the 12-round welterweight bout between Sergey Lipinets and Custio Clayton.

Hawkins (18-0, 11 knockouts), who resides in Baltimore, Maryland, last fought on December 28 in Atlanta, winning by fifth-round TKO over Darwin Price when his opponent was unable to continue due to a knee injury. Despite being victorious, Hawkins was down on all three judges’ scorecards going into Round 5.

Like most fighters, the 24-year-old had to deal with a fight postponement due to the COVID-19 pandemic. However, during his time out of the ring, Hawkins was able to secure solid sparring against some of the best fighters in boxing.

“Training during the pandemic didn’t really affect me physically, just mentally, because I was set to fight in the summer,” said Hawkins during a media roundtable on Thursday. “Then we had to readjust, but you can’t cry over spilled milk.

“I’m feeling great heading into this fight. I’ve had a tremendous training camp with a lot of different types of sparring. I’ve sparred with Terence Crawford, Jaron Ennis, Jamel Herring and Maurice Hooker. I’m prepared for any type of look Matias is willing to bring.”

Hawkins was originally scheduled to face Matias on October 10, but the fight was postponed two weeks as Uzbekistan’s Kudratillo Abdukakhorov, Lipinets’ original opponent, was unable to secure a travel visa from Malaysia. Clayton took the fight when Abdukakhorov was forced to withdraw.

Matias (15-1, 15 KOs), who resides in Fajardo, Puerto Rico, suffered his first loss as a pro in his last bout on February 22, losing by unanimous decision to Armenia’s Petros Ananyan. The fight would have been a majority decision draw had Matias not been dropped.

On paper, Matias has faced the better opposition, but Hawkins believes he is ready for this significant step-up in opposition.

“We definitely looked at Matias’ last fight,” said Hawkins, who is promoted by Mayweather Promotions and trained by Calvin Ford. “Everyone looked at his record before that fight, but what we saw is that if you actually fight him back, he’s more of a B or C-class fighter. I think that’s the type of fighter he is.

“His team is using the excuse that he didn’t take his last opponent seriously. With the way I train, it doesn’t matter if my opponent is 0-20. I’m always going to come into the fight at my very best.”

Hawkins is not ranked in the top-15 by any of the major sanctioning bodies but an impressive victory could change that. Matias is ranked No. 10 by the IBF.

Matias could be Hawkins’ most challenging fight thus far, but he believes a win could bring him closer to a world title shot.

“One thing I know is that he’s going to try to bully me but that’s what I’ve always done. I’m not going to sit there and let him beat me at my own game.”

“I don’t really pay attention to someone’s knockout ratio. Those knockouts didn’t come against anyone who fights like me. I’m just looking at this like an opportunity to get closer to my world title shot.”

At Friday’s weigh-in, Hawkins weighed in at 140 pounds and Matias weighed 139.5 pounds.