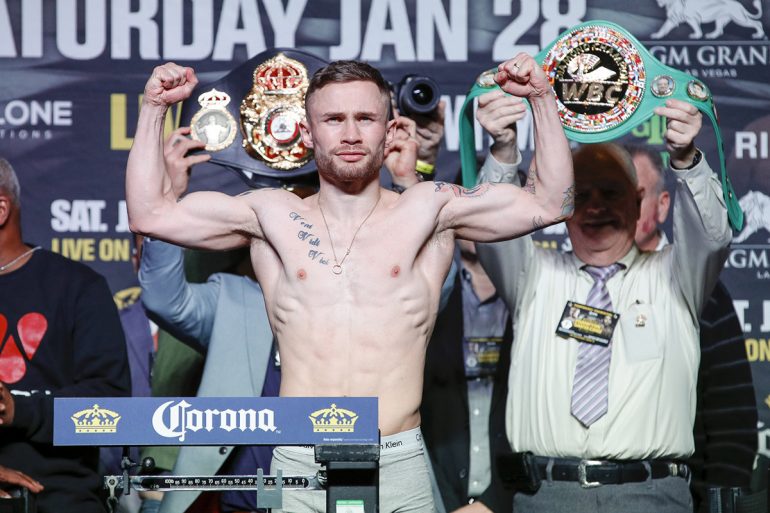 Carl Frampton had been sitting on the news since Friday morning. He didn’t even share it with his father. But once “The Jackal” got the okay, the former junior featherweight and featherweight titlist will get a chance to claim a title in a third weight class when he takes on WBO junior lightweight titlist Jamel Herring, possibly in December, possibly in the United Kingdom, according to Frampton.

I've just got the news that I've wanted for a long time. I will be fighting the champ @JamelHerring before the end of the year. Thanks to MTK & WBO for making this happen. Time to become 3 weight champ

Frampton (28-3, 16 knockouts) would be coming off consecutive victories, after losing to defending IBF featherweight titlist Josh Warrington in December 2018. Herring (22-2, 10 KOs) would be defending the WBO junior lightweight belt for the third time, coming off an eight-round disqualification victory over Jonathan Oquendo in September.

Herring won the WBO 130-pound by wresting it from Masayuki Ito in May 2019.

“I was told Friday morning about the fight, but I couldn’t even tell my dad,” Frampton said exclusively to The Ring. “We don’t have a date or a site yet, but it will be before the end of the year and I’d like to think that they’re looking at the U.K. for the fight. I feel good about this. I can’t wait to get back in gear. Jamel Herring is a world-class fighter and I will have to be up for him.

“For me, I’ve been staying in shape and hoping for this opportunity. This is a fight that’s been talked about for months now. This is a huge opportunity for me, because there aren’t too many fighters who are three-division world champions. There’s never a fighter from Ireland that has done it. There have only been a couple from the U.K. that have done it.