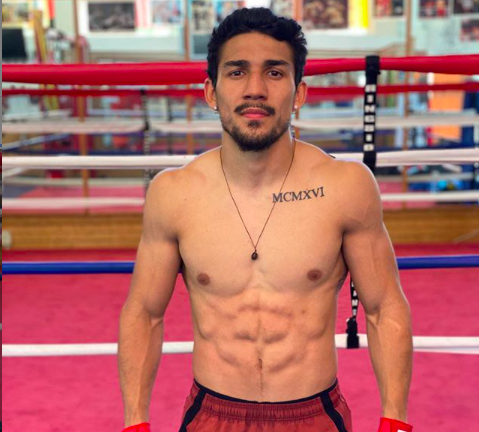 I’m not making a pick for RING, to predict what will happen Saturday, Oct. 17 at the MGM Bubble in Las Vegas, when Teofimo Lopez seeks to convey that anyone doubting his forecast that “The Takeover” starts now should have listened harder and believed, and Vasily Lomachenko desires to prove that his bite is still quite sufficient, thank you very much.

I told young Lopez (15-0 with 12 KOs) that during a Friday phoner, before he went for a workout.

It’s one week away from the weigh-in for his career-defining fight, which comes way earlier than is the norm in this age, of the slow and deliberate, sometimes excessive, build up. And I told our man Anson Wainwright that I’m not making a pick, I’m recusing myself, on Friday morning.

Here’s why–Part of me analyzes and postulates that the lefty Lomachenko (14-1 with 10 KOs) is a master craftsman, and by no means faded because of age/mileage wear ‘n tear. And other parts of me, the “fan,” and the guy who wants the sport as a whole to rise, is torn by the fact that I feel excited by the skill set of the 23 year old Lopez, and his in-ring POV and what it might mean to the sport to have such a talent win such a fight.

A Lopez win could, arguably, give casuals the sort of attraction that gives us a significant eyeball boost. Lopez is someone who typically looks to remove the head of the foe from their shoulders, and who also possesses that mix of looks and ability to trash talk and complexity of persona that makes him somebody that even non-boxing people might consider investing some time into getting to know, and following their progress.

“So, I’m recusing myself, I’m not going to offer a pick, because I appreciate you coming in to Everlast, with your dad, and doing the TALKBOX podcast, for an hour, when you could have just phoned in,” I told Teofimo Friday. “And that influences me. Part of me, Teofimo, is thinking that Loma is a master technician and anyone suspecting he’s an old dog with arthritic hips who can’t pull off masterful tricks anymore could be bitterly surprised Oct. 17. And part of me thinks fate is fixin’ to offer us a changing of the guard shift on Oct. 17, and you, young gun, will take down the more seasoned shootist. So, I gotta be honest with you, I’m not making a pick.”

There was a tiny pause. “You gotta go for me,” Teofimo said, and I could hear the hint of a grin on his face.

I laughed, heartily, and wondered why I thought he might say, ‘Woods, I respect that honesty, yes, may the best man win.’

OK, why then…Why should I be predicting that Teofimo follows through on his promise that “The Takeover” will on Oct. 17 go into Phase 2 with much pomp, circumstance and violent pageantry on ESPN Oct. 17? 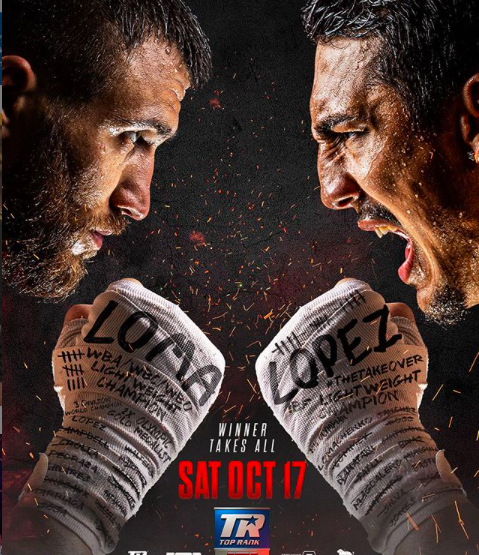 “Because I’m the future of boxing,” he said, matching up quite nicely with what he said when he came to Everlast with his dad Junior in December 2018. And when he did the show in January 23, 2018, when he was just 20 years old, holding a 7-0 record, he owned a similar level of belief in self.

“I always steal every show,” he declared, weeks before his Feb. 3, 2018 clash against 30-14 Juan Pablo Sanchez. Jose Benavidez, Rohan Murdock, Jesse Hart, Gilberto Ramirez and Jerwin Ancajas were higher up the card that night than Teofimo, who scored a UD6, for the record.  “I might even fight for a world title at the beginning of 2019,” Teofimo told me then.

And I asked him then about why he thought Terence Crawford is No. 1 P4P, over Loma. “Lomachenko is 10-1,” he said, contrasting that with Bud’s undefeated mark. “I’m not very big on Lomachenko,” he admitted, when I asked him if maybe down the line he’d like to step in with Loma.

And yes, it was clear then that he’d made up a To Do list, and Loma was on it then. Even more clear when father and son came to Everlast headquarters Dec. 12, 2018. Four days before, Loma had downed Jose Pedraza at the MSG Theater, and on the same card, Teofimo a little bit stole that show with a KO1 blastout of Mason Menard.

Dad told podcast listeners that Loma looked a little old then, while the son said he didn’t want to take anything away from the vet, but he did believe he stole the spotlight.

So, fair to say Teofimo pictured a version of what will happen Oct. 17, but no, he didn’t have a thimble of an inkling that the lightweight showdown would take place in front of but a smattering of watchers.

“Is this the perfect time for this fight? Because due to the pandemic, everyone is going to be enjoying it at home, wherever there’s a TV,” Teofimo stated. “So I wouldn’t say perfect…but it is the best time, due to everything going on!”

In his mind’s eye, Teofimo saw himself fighting the 32 year old Ukrainian chess-master while feeling the physical vibrations of 21,000 beings packed into Madison Square Garden, sending sound waves into center ring and lifting the pugilists to higher highs with their encouragement (and disses, too.).

“But what can we expect, it’s a pandemic. Yeah, sold out MSG would be perfect. Absolutely, all the belts, sold-out arena, on pay per view. But we’re not doing it pay per view, because of the pandemic, we’re thinking about the fans, the economy, the real world,” Teofimo said. “And yes, this does reduce the magnitude of this fight, that’s the only downside. But you gotta think on the bright side, Woods, that means wear a mask, follow protocol, and hopefully, in 2021, we won’t have this, God willing.”

You all see the image topping this story? Teofimo posted this to his IG on Friday afternoon. Yep, looks like he’s destroyed most any hint of the effects of COVID cooking. We had a laugh that he can be blessed for that, but that I’d have a bad scale fail if forced to walk that plank. My kids busted my chops last week, I told him, when word went round what Trump weighs, after his Walter Reed visit.

“Do you weigh more than Trump, dad,” the girls teased me. I offered up that self deprecating tidbit and then swooped in with the query. What is he weighing today, one week out from the scale session?

And what about on fight night? What’s his prediction for Lopez vs. Lomachenko Oct. 17, in Las Vegas, and on ESPN?

“In my favor,” Teofimo said in closing. “We busted our ass, worked a lot for this. And this is just the beginning! I’m coming out victorious, whether it’s a 12 round decision, or by KO.”