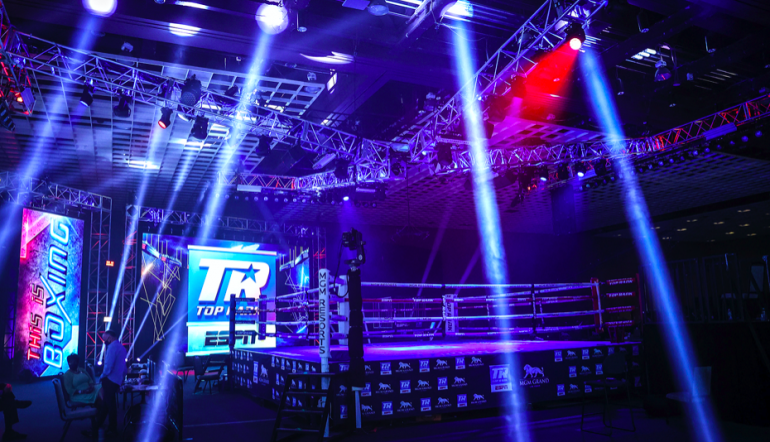 The absence of fans can hurt a promoter, who sometimes gets decent gate revenue..but HearMe Cheer has helped fill the vacuum of the lack of patrons on site for TR. (Photo by Mikey Williams for Top Rank)
16
Sep
by Michael Woods

When we all heard that the show would go on, and that fight cards would be put together, but in an “empty arena setting,” we tried to picture how that would look, and sound.

The look, we figured that wouldn’t change THAT much, you’d still have two people fighting in a ring. But the context of the clash would change, because there would be no patrons surrounding the ring, transfixed (or not) and roaring approval (or registering dismay). Would that change the dynamic of the fight, would the energy be the same in a building with maybe 50 people in there, and only the corner-team raising the decibel level.

It turns out, no huge surprise, that innovators and entrepreneurs also pondered some of these changes in format, and thought of ways to respond.

HearMeCheer, an audio broadcast app that  collects live fan noise and streams it into stadiums, entered the fray, and brought their concept to Top Rank, the Las Vegas based promotion titan. 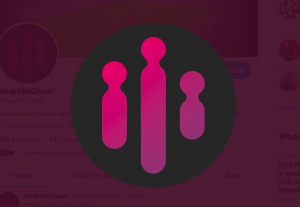 The company founder is 20 years old, and has been working on features like what you hear on the Bubble shows since he was 14.

If you’ve watched the “Bubble” bouts from Bon Arum and company, unfolding at the MGM Grand Conference Center Grand Ballroom in Las Vegas, then you’ve taken in an atmosphere affected by the 20 year old founder of HearMeCheer, Elias Andersen.

“Top Rank challenged us to enable fans and viewers to hear and feel as though the arena was full, but at  the same time not deliver audio that detracted from the telecast,” said Andersen, the 20-year-old CEO of Toronto-based ChampTrax. “They wanted the fans to participate live in the event. We launched the HearMe Cheer app through  viewer cellphones, as suggested by the announcers on location in on-air promotions during the  broadcast. The result was live audience reactions and sounds captured through  HearMeCheer and ‘piped’ into the production at the MGM Grand Conference.”

Brad Jacobs is the COO of Top Rank, and the man who pound for pound carries the most weight when it comes to imagining the shift to “COVID era” fight cards and seeing them come to fruition. (Click here to read up more on how Jacobs planned for the in-the-bubble matches.) “HearMeCheer delivered authentic, live fan reaction and  crowd noise during our events, bringing the fans closer to the matches, almost as if they were in the  arena with us,” said Jacobs. “HearMeCheer proved to us it can be done, and our telecasts are greatly enhanced by this new way to engage our fans.”

I reached out to the HearMe crew, to get some more insight into what they’ve brought to the table.

Jason Rubenstein, the co-founder and Chief Operating Officer of HearMeCheer, took my queries and offered up answers.

Woods Question: Please summarize how the app was born. Was there a “eureka” moment, when it clicked in?

Rubenstein Answer: The app was first thought of when the NBA and NHL shut down and paused midseason. We knew that fans could be out of the stadium for awhile so with HearMeCheer we created a method for teams to engage with their fans — and fans with their favorite teams — from the comfort of their home. Elias and I actually were walking to get lunch, at a spring training site in Arizona, when this whole thing happened with the NBA having a positive test, cancelling a game where all the fans had already arrived, and eventually pausing their season.

Q) Hey, before we get deeper, can I get a bio blast …Please share some about where you all grew up, where you live now, and what brought you to where you are today.

A) I grew up in New Jersey. Sports have always been a big part of my life from playing as a kid. Elias on the other hand is from a smaller town outside of Toronto. Elias has been working on technology in sports for a long time, since he was 14 years old, and made a sound-based electronic umpire.

Q) Who are your competitors, and how are you all different?

A) There are a few other competitors who rely on button-based solutions. Fans go onto these sites or apps and press buttons to send canned noise to the game they’re watching. HearMeCheer, on the other hand, allows fans to react naturally and even communicate with their friends in private suites. Additionally, HearMeCheer users can simply open the website and put it down on their living room table while watching the game.

Q) Will there be a place for this service once patrons are allowed back in arenas? Can you share concepts for growth and adaptation post pandemic?

A) We believe there is a huge need for teams and live events in general to engage better with their passionate fans at home. It is difficult for many people to be at a stadium frequently, if at all,  and in many cases the majority of an event’s audience is at home. Currently we use features such as Twitter and private suites to allow fans to interact with each other (and with their favorite teams), but have a bunch more planned for the future!

People are hard to please, right? Folks get used to things and can get salty when a formula is changed up on them.

The NBA, by and large has gotten good review for what their “crowd noise” system brings to the table.

More than 700 audio clips–think cheers, boos, gasps at a hardcore jam—are stored on servers, according to a Sports Video Org story. One source is video-game publisher 2K Sports’ NBA 2K series, by the way.

And here’s a little touch that I suspect some people like, but subconsciously. Supposedly, they make sure not to use the same noise twice—so it’s NOT like when you watch an old sitcom, and you hear the same buffoonish guffaw every two minutes.

Of course, not everyone is enthralled, by the NBA, or the NBAs’ bid to make the events more “normal.”

This Twitter user didn’t care for the piped-in crowd noise during an NBA game….

For the record, if you watch NY Red Bulls games, then you are hearing the hurrahs and hissing and such collected by the HearMe Cheer crew, for that Major League Soccer club.

I am curious, readers, what are some changes, or innovations and adaptations, that you have noticed in “Bubble” product? What are you hoping will stick with us, when we “get back to normal?” Tell us, in the comments section.