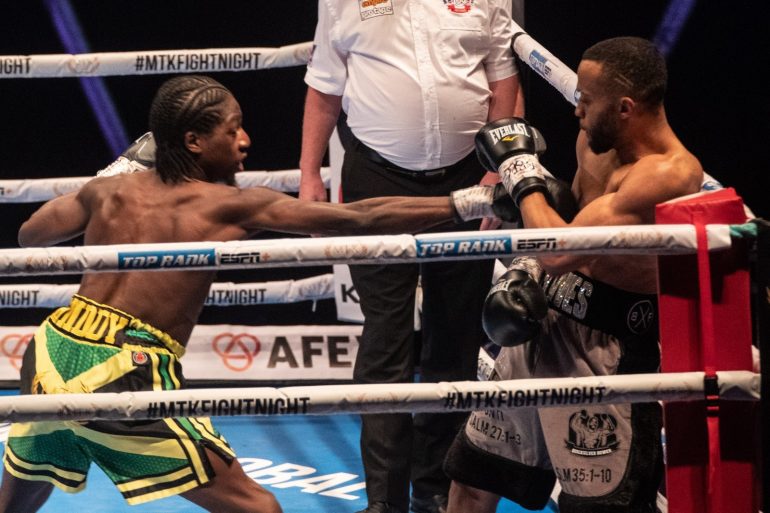 Ennis-Brown (left) on the attack against Bowes. Photo courtesy of MTK Global
02
Sep
by Anson Wainwright

Bowes, who had the better start, was cut in the fourth round. Initially he was more accurate, but as the rounds passed the younger Ennis-Brown was busier. The 36-year-old Bowes’ cause wasn’t helped when he was deducted a point in the eighth round for excessive holding.

“It’s a good feeling,” Ennis Brown said during his post-fight interview. “I wanted to have a proper war, but it was what it was. My team said go out there and win it.

“I’m happy to be the first person from Gloucester to bring these titles back [home].”

Dan Azeez claimed local bragging rights when he stopped Andre Sterling in the ninth round to retain his English light heavyweight title. The official time was 1:59.

Sterling was cut in the second round and warned for holding in the final minute of the fourth. Azeez (12-0, 8 KOs) began to take over from that point and scored a flash knockdown when he caught his fellow South East London rival with a short right hand in the sixth. Sterling (11-3, 4 KOs) got to his feet and continued, but his eye continued to get worse.

Both men exchanged shots in the seventh round of an exciting encounter. Azeez was a step ahead, however, and in the ninth Sterling’s corner had seen enough and threw in the towel.

“Andre’s a tough opponent, I gave him some good shots and he just kept coming,” Azeez said. “I had that drive, I wanted to punish him and get him out of there. I was really, really pleased with that.

“I’ve said from day one I want to go down the traditional route. I want the Commonwealth or British title.”

Super middleweight Padraig McCrory (11-0, 5 KOs) impressively stopped Mickey Ellison (12-3, 4 KOs) with a devastating right hand in the opening round. Mark Lyson waved off the count at 1:10.

In featherweight action Mark McKeown (3-0, 1 KO) stopped debutant Levi Dunn in the fourth round. The 26-year-old from Scotland picked Dunn apart and had him in trouble when Mark Lyson called a halt at 2:30.

Junior welterweight Harlem Eubank knocked out Martin McDonagh with a left hook-right hand combination in the eighth and final round. The nephew of Chris Eubank Sr. moved to (10-0, 3 KOs), while McDonagh dips to 8-2.