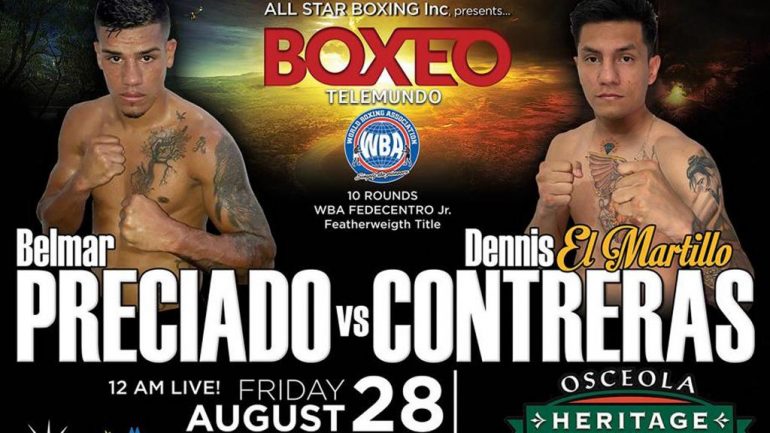 Featherweight Belmar Preciado is hopeful that a fight against unbeaten prospect Michael Conlan is still in the works for later this year. But for that to happen he must first notch an impressive victory over a fighter who has nothing to lose and everything to gain.

The 32-year-old Preciado (20-2-1, 13 KOs), who resides in Barranquilla, Colombia, last fought on December 7, knocking out Jose De Jesus Lopez in three rounds. He has won his last two bouts since losing by knockout to former world title challenger Hiroshige Osawa in December 2018.

Preciado was originally scheduled to fight unbeaten prospect Michael Conlan on March 17 in New York City, but that fight, along with the entire Top Rank card, was canceled due to coronavirus. Promoter Tuto Zabala is confident that Preciado would have pulled off a huge upset win, but he also insists that his fighter is in for a battle against Contreras.

“[Friday night] is Preciado’s time to shine,” Zabala told The Ring early Tuesday morning. “He was ready to shine against Conlan on March 17 at Madison Square Garden in a fight we really liked a lot, but it unraveled because of the COVID-19 pandemic.”

“Contreras, on his part, [defeated] an unbeaten opponent in his last bout. He hits hard and has fought some of the top fighters, including Hugo Ruiz and Emanuel Navarrete, along with contender Carlos Ornelas. Both are hungry to win and gain exposure on American TV.”

Preciado’s other loss came at the hands of Mauricio Martinez in June 2016. His most notable victory to date was a split-decision victory over former junior featherweight title challenger Franklin Manzanilla.

Contreras (21-10-1, 19 KOs), who resides in the boxing hotbed of Guadalajara, Mexico, defeated Fernando Garcia in his last fight on May 25 of last year. The victory snapped a five-bout winless streak for Contreras.

In the co-feature, featherweight prospect Orlando Gonzalez (15-0, 10 KOs) will face gatekeeper Diuhl Olguin (14-13-4, 9 KOs) of Mexico in an eight-round bout.

The 25-year-old Gonzalez, who hails from Aguadilla, Puerto Rico, is the older cousin of unbeaten featherweight Henry Lebron, who defeated Luis Porozo by decision last Friday on a “Boxeo Telemundo” telecast.