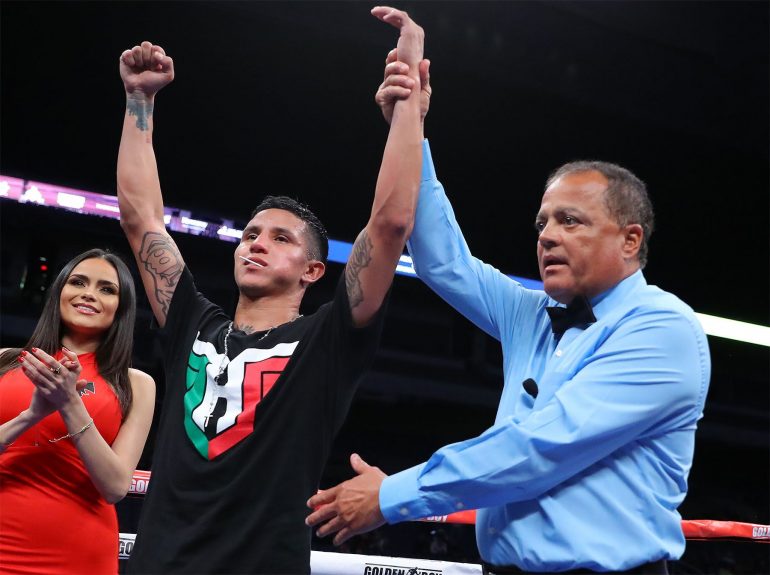 His first paycheck was not enough to purchase a gallon of milk, let alone a pack of gum.

“I knew going in that I was going to get paid, but I also knew it wasn’t going to be much,” Valdez told The Ring “I got paid one dollar. And I was like, ‘Oh well, at least I got paid a dollar.'”

On April 5, 2014, an 18-year-old Valdez made a splash in his pro debut, blasting fellow newcomer David Almendarez in one round in Fort Worth, Texas.

That moment was 11 years in the making for Valdez, who has maintained a mentality that if you “dream big, work hard, stay focused, and surround yourself with good people, you will attain success in all aspects of life.”

“It is just a blessing to be where I am at,” he said. “Now that I am with Golden Boy, I will never have to worry again about fighting for free. It’s amazing to see how far I have come and what I have become since my pro debut.

“It feels great to be with Golden Boy. Not everyone in boxing or sports can say that such a fantastic group of people represents them. Not only am I surrounded by great people, but I also get to train with top prospects.”

Prior to the Rios fight, Valdez was accustomed to facing opponents with as little as career victories, except for a May 2016 clash against Naciff Martinez. The 25-year-old told The Ring that his next fight would also be a “step-up” in competition.

“My team told me to expect my upcoming opponent to test me to my wits and take me into deep waters,” he recalled. “Then from there, we’re going to take it day-by-day.”

Morales has won his last two bouts, though both opponents have yet to have their hand raised in victory.

For this camp, Valdez is working on perfecting his timing.

“I’m a student of the game. There is always room for improvement,” he added. “I like the timing that fighters like Joshua Franco and (former four-division titlist) Mikey Garcia has.

“It looks like they are not even throwing hard, but those punches affect you, and that’s what I want to work on.”