Out of main event, Mikkel LesPierre is role model of poise and class 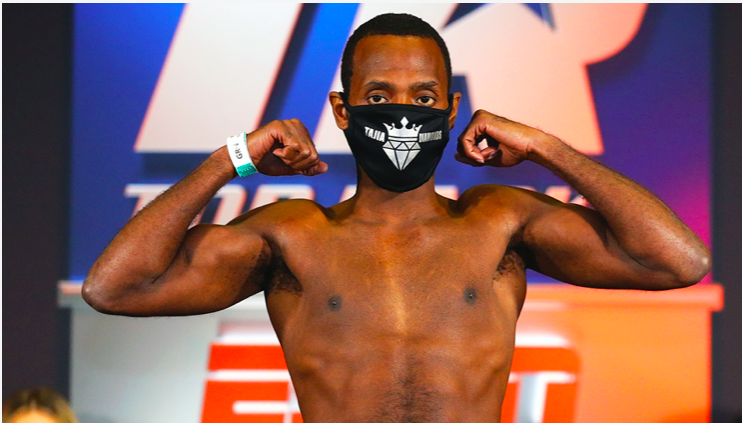 The boxer when he re-tests and the result is negative can fly home to see family. (Mikey Williams photo for Top Rank)
18
Jun
by Michael Woods

As of late last night, Mikkel LesPierre still thought that he’d be fighting Jose Pedraza the next day, still had that mix of emotions bubbling in his brain and gut you get the night before a fight.

I messaged with LesPierre, a 35 year old New Yorker, who reps Gleason’s Gym, and holds a 22-1-1record. 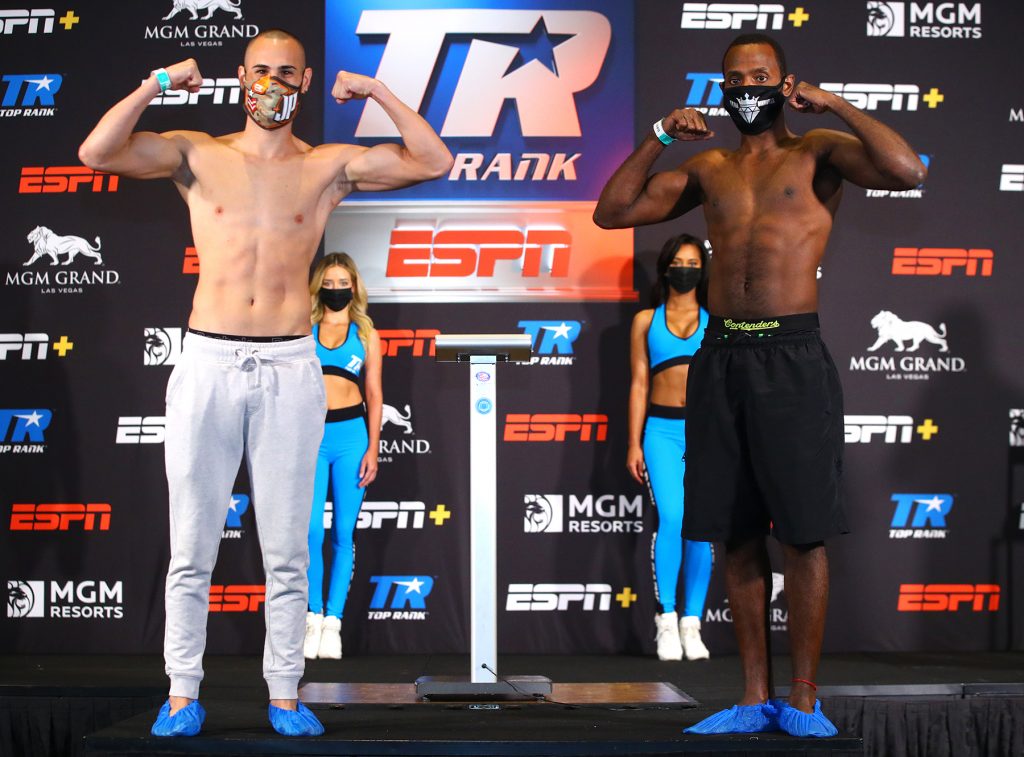 The combatants posed for Mikey Williams Wednesday. The next morning, LesPierre was told his fight vs. Pedraza was off, because a member of the New Yorkers’ team tested virus positive.

“Yeah, you can say that, he is a former two time world champion with more experience,” LesPierre said, “but I feel I’m the bigger guy and will be able to use that to my advantage.”

And not long after sending that message, LesPierre went to sleep. He got ZZZs in the MGM in Las Vegas, within “the bubble” constructed by Top Rank, and the facility, with input from the Nevada commission and other powers that be seeking to have live boxing events unfold, in a pragmatic fashion with a primary focus on safety.

The phone rang, at 5 AM, and the news was not welcomed. “I got a call like 5 AM Vegas time,” LesPierre told me, “but it didn’t become official till like 6 AM, that’s when they called off the fight.” 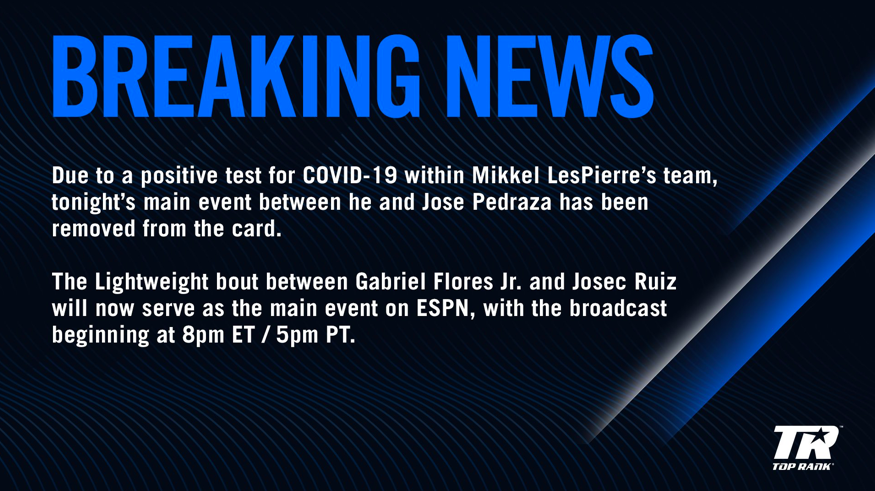 The main event, which is to run later this evening, at MGM, and unfold on ESPN, got cancelled. Top Rank sent out a release, informing boxing media, of the shifting landscape.

I told LesPierre today, after lunch time on the East Coast, that I hoped Tavaras is feeling OK, and wondered how he’s handling this development.

“It’s all good, can’t cry over spilled milk,” LesPierre said. “I’ve been through a lot in my life, I try not to stress the things I have no control over.”

That, my friends, is wisdom personified. Part of that level-headedness could be informed by the fact that LesPierre has a day job on the side, like most fighters, even ones that fight for titles, as he did against then WBO 140 champ Maurice Hooker last March.

An ESPN.com story described LesPierre as a “data specialist.” He toiled at an ear, nose and throat office in Manhattan, in Union Square, but his duties shifted when coronavirus invaded NY, and stealthily made the rounds. “I was deployed mid March to Beth Israel on 16th and 1st, and assisted the nursing administration office with all the COVID supplies and personal protection equipment (PPE) being ordered for the hospital and units. I helped in putting together the COVID units and intensive care units for the patients being admitted to the hospital.”

Doing that, and looking to stay in shape and sharp enough so when and if a call to fight came, he’d be ready to deploy. LesPierre and head trainer Joan Guzman, an ex world champ from the Dominican Republic, trained outdoors at either the Williamsbridge Oval, a park in the Bronx or at Bronx River Park. That’s because their regular haven, the famed and fabled Gleason’s Gym, has been shut down since mid March. Owner Bruce Silverglade has tried moving mountains and earth to get the state to give pros who train at Gleasons the same consideration that pros toiling for the Brooklyn Nets get…but to no avail, as yet. 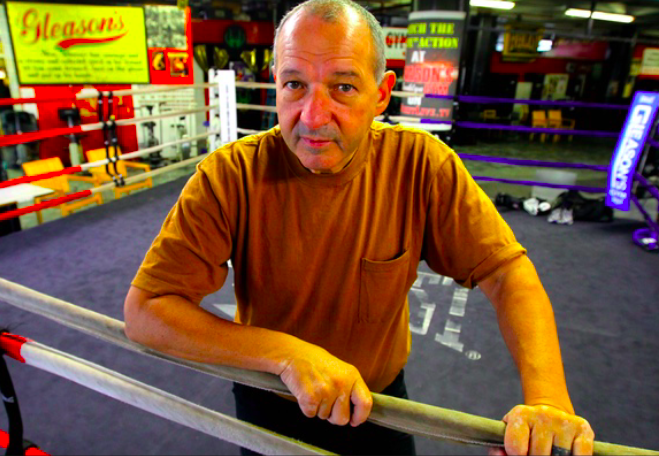 Gleason’s Gym owner Bruce Silverglade has asked nicely, several times, for NY Governor Cuomo or his team to tell him why the Brooklyn Nets can gather to train…but pro fighters like LesPierre cannot, at Gleasons.

LesPierre told ESPN he thinks he caught the virus, between March and May, but a test for the presence of antibodies he took before going to Vegas turned up negative. His tests in Vegas, for the presence of the virus, were also negative. But manager Taveras got that call, which comes between 5-6 AM, when the testers tell you that their sampling showed you have the virus in your body. Taveras “tested negative upon arrival in Las Vegas but then had a positive test result Thursday morning despite saying he experienced no symptoms,” the manager told ESPN writer Ohm Youngmisuk.

Someone asked me on Twitter today, is this the new normal? It is for now, I said, but no, there will be a time when we look back at all of this and say, ‘Member when…?’ And I don’t think I will ever, I hope, simply see this all as a strange time period.

Too many folks have died, and media as a whole hasn’t by and large conveyed the enormity of the scarring that this virus will leave behind on the body of the nation as a whole. LesPierre gets it, his work at that NYC hospital, seeing body bags, getting the real deal from hospital staff doing battle in the ICU, means he has been informed first-hand, and not through a spin dispenser.

Mikkel is a good man, who could have manufactured it so he wasn’t doing his work at that front-line site in NYC. His courage and decency should be acknowledged properly. As of right now, he is at the secondary fight hotel, which is off the strip. LesPierre will quarantine until Saturday morning. Then, he will be required to pass another COVID-19 test before flying home this weekend. He will be on my mind tonight, as the fights play out, and tomorrow, if and when I get discouraged by some impediment.