Keith Hunter is looking to break his father’s curse 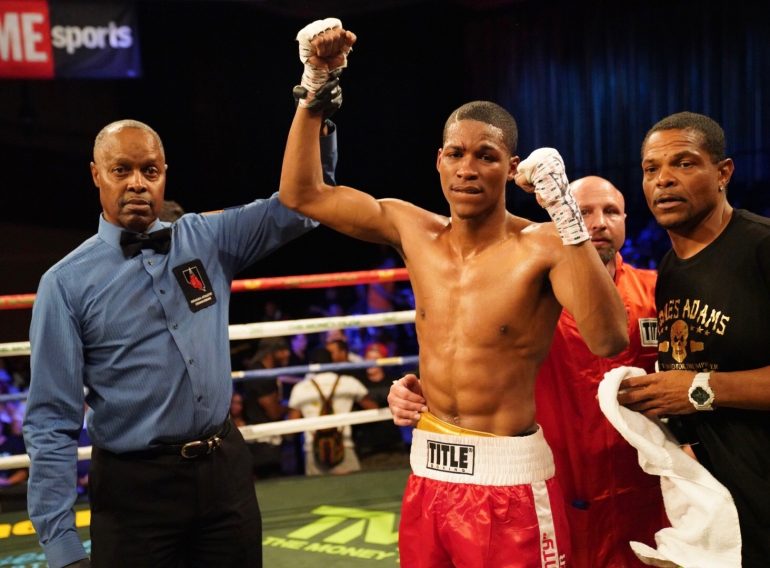 Curses have a vexing quality to them. They creep around, pinch and prod, and are never quite tangible enough to swat away.

Junior welterweight Keith Hunter knows it too well. He is damned by a boxing double-whammy. He’s blessed with the boxing lineage and genetics of his father, a tougher-than-his-record Mike “The Bounty” Hunter, and cursed with the talent his late father had as someone too risky for any contender to take a chance against.

Hunter (12-0, 7 knockouts) was counting in 2020 to be a launching point, only to have the COVID-19 pandemic snip his plans into pieces, after beginning the year with a 10-round victory over Sanjarbek Rakhmanov on Showtime’s ShoBox in February.

Hardcore fight fans might remember Mike “The Bounty” Hunter. He was a staple on USA Network’s Tuesday Night Fights.

He gave hell to Oliver McCall, Dwight Muhammad Qawi, Pinklon Thomas, Frans Botha and Tyrell Biggs, beating a lot of those guys, while his success forced the primetime guys away.

“It’s the same thing I’m going through,” says his son, Keith, who was 14 when his father was tragically killed on February 8, 2006, in a roof-top altercation with Los Angeles police. “I think I’m breaking some of those curses, which you do through time. I’ve been sitting on the shelf, not because anyone doesn’t believe in me, but because I’ve been avoided.

“I feel like I’m living with my father’s curse. His passion for boxing was bigger than his platform. I feel the same thing. I’m really trying to leave a legacy here. I’m not looking to make a couple of dollars and then leave boxing.”

There was a spell Keith went through, living through Section 8, and with the help of his older brother Mike.

Keith, who’s trained by Bones Adams, began soul searching for his boxing future around the time he turned 15. He just lost his father and was trying to cope with the heavy loss, when he began contemplating following his father’s past.

“The Bounty” had his “demons to the reckoned with,” according to Keith, but he did not have to be taken away in the manner in which he was.

Keith found out late at night, when his brother Michael found their mother crying on the phone in a darkened bedroom. Michael called Keith up and their mother told them the news.

“You don’t know what it’s like until you hear that you’ll never see your father alive again,” Keith recalled. “That moment led to the moment where I am now as a fighter.

“I was so young; you don’t reflect on how your life will go. Going through life, I have looked back and reflected on it. In his lifetime, one thing in my father had a love for was boxing. He wasn’t perfect, but he was a good father. He was a good fighter, who didn’t get the opportunities.

“It’s what I’m trying to change. I want to be the next Tommy Hearns. I don’t do it for money. I do it because I love it.”

Keith, 27, didn’t begin to take boxing seriously until he was 16. Either finances or age got in the way of Keith making an attempt at the Olympics. Michael Jr. was more fortunate, because he started boxing earlier and stayed with it.

Keith was looking to break the invisible threshold fighters like him are banished.

“I know who I am and what I’m about, I am a high-risk, low-reward guy to any name fighter,” Keith said. “I wanted to fight as many times as I could this year. I had no set number.

“I had plans, big plans after the Showtime fight. I’m going to stay at 140 right now, and I’m struggling not to make that weight at 6-foot tall. I can’t wait to get going again.”

And break that curse.