Fueled by her brother’s memory, Sulem Urbina is anxious to get back to boxing 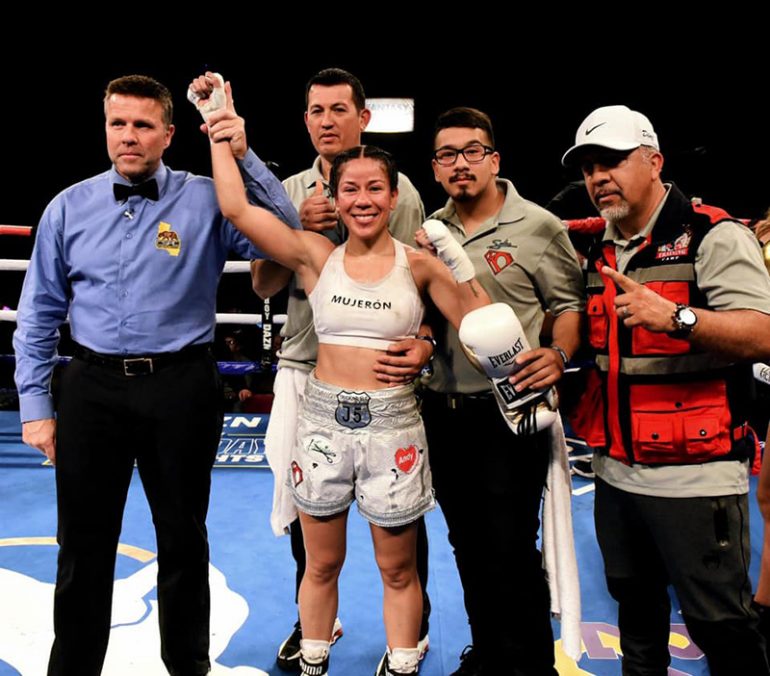 Sulem Urbina and team following her victory over Noemi Bosques in 2020.
16
Jun
by Thomas Gerbasi

There are plenty of four-letter words being thrown around in reference to the coronavirus that has raced through the world over the last few months. Unbeaten flyweight contender Sulem Urbina can relate to all of them, and while she’s not using profanity, she is not shy in admitting that she isn’t too happy to be in the middle of the COVID-19 pandemic.

“It’s been hurdle after hurdle after hurdle,” she said. “I drove forward, I’ve done it right and I’ve been patient and now this. I was talking to Golden Boy about a future contract and I’m pretty much part of the team and then this happens and the offices are shut down, everything’s closed and I don’t have my contract yet and I don’t know when I’ll be fighting again, so it’s very annoying. And then my father tells me, ‘Hey, you’re not getting any younger.’

Urbina laughs, well aware that when it comes to boxing, if it weren’t for bad luck, she would have no luck at all. But that’s the thing; when she fought and beat Noemi Bosques in February, things were finally turning around for the 29-year-old, who has been criminally underrated and overlooked going back to her amateur days.

She was fighting on a Golden Boy Promotions card, it was her first pro fight in the United States, and that showcase victory came in front of nearly 30 friends and family members who took the drive from Phoenix to Indio to support her.

It was a night she will never forget.

“I’m a person that appreciates every single little thing, anywhere from the treatment I received right when I arrived at the hotel to the interviews,” Urbina said. “I fought on TV I don’t know how many times (in Mexico) already and this was the first time that I did a pre-fight interview. And (Bernard) Hopkins was there, and all the Golden Boy crew and, to me, that was awesome. I had so much fun. It was a whole different experience for me.”

I had such an incredible night. I thank God for giving me health and life to be here living these moments. Thank you to my team for always holding it down @andrewssoto @coachjoeldiaz @the_chavez_fam_2011 . Thank you @goldenboy @micheladatime for making my dream come true fighting in the US close to home where my family and friends could attend. Thank you to all those that support and follow my journey, the numerous messages I receive full of love makes my heart smile. J5 trucking @_anaisromero_ @myxtremestitch @losamigoswalnut @anaya8984 for thank you for your sponsorship and believing in my dream. A huge thank you to all the media that covers me, I appreciate you all. From the bottom of my heart thank you all for being TEAM URBINA #foryoualexis #womanstrong #shecandoboth #boxeomexicano #mujeron ? cred @lmejiaphotography

Throughout the bout, which she won by way of a shutout six-round decision, Urbina couldn’t escape her mother’s voice. And there was no better sound for the Hermosillo native. 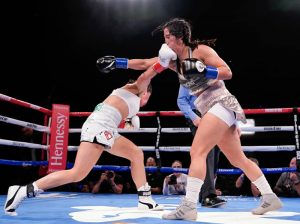 “I’ve gotten very good at blurring out the noise when I fight and I just hear my corner, but I heard my mother yelling,” she laughs. “My mom’s that Mexican lady that doesn’t sit down throughout the boxing matches. She stands up, she cheers loud, and I could hear her. So, it was very exciting. And then I got to hug her after the fight, and just seeing her face, she’s a very sad person, and if I could give her that happiness for a little while, it makes me so, so happy, and it meant the world to me.”

Clearly, boxing isn’t just a sport for the Urbina family. Never has been. It’s a lot more important than that, and it took on an added gravity when Urbina’s brother Alexis was killed in a home invasion in 2013. He was just 17 and with a bright future in the ring ahead of him. Sulem, who was also making waves as her own on the amateur scene, was obviously devastated by the tragic loss, but she’s used her brother’s memory to fuel her when life in the boxing business gets overwhelming.

“In life, we don’t have the choice as to certain things that happen to us, but we have the choice as to how we confront them,” Urbina said. “My brother was such a special, bright, smart, happy kid that I want to share his story in a positive way and have him be remembered in a good way. I could throw myself into depression and just hang up the gloves and sit there and mope around and cry my life away. But I think he would have wanted me to keep on going and to make a positive life. He motivates me every single day.” 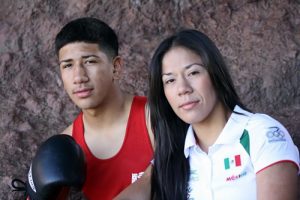 When The Ring spoke with Urbina on April 30, it was just days before Alexis would have turned 24, right smack dab in what would have been the annual Cinco de Mayo boxing event. Urbina was hopeful that the win over Bosques would have secured her a Golden Boy contract and a spot on the proposed Canelo Alvarez show. COVID-19 scrapped all those plans.

“That was one of my hopes,” she said of fighting on Cinco de Mayo weekend. “It was gonna be for him in his honor, just celebrating his life. That’s another reason why I’m kinda ticked off at Corona. (Laughs) But it breaks my heart that he’s not here and I wonder what he could have accomplished, so I want to try and do the best that I can, not only for him, but for myself also. I know he would have wanted me to be happy.”

Urbina is doing her best to stay happy, mainly because she’s hopeful that once boxing gets back to semi-normal, she’ll get more opportunities to compete here in the U.S. and move her career forward. Those are words she’s wondered if she would ever hear.

First there was her inability to compete on the national scene in the United States because her parents were undocumented.

“I believe in God, I praise God and I believe some of us are just given a more difficult road and we have to overcome it, for one reason or another,” Urbina said. “I’ve had a very tough one, all the way from the amateurs and not being able to fight in the States because I was undocumented and my parents brought me here at a very young age and I couldn’t do much because I wasn’t a U.S. citizen.” 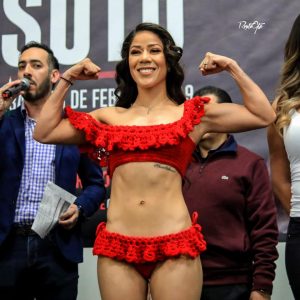 Urbina flexes at a weigh-in in Mexico.

And while she impressed with a 96-17 and several appearances internationally for Mexico, the best offer she received when she turned pro at 26 in 2016 was from Zanfer Promotions in her home country. On paper, it was a good start, especially given the way women’s boxing is received in Mexico, with major bouts aired on national television from packed venues.

“Women’s boxing is a little better over there, competition-wise,” she said. “I debuted on national TV and most of my fights over there were on TV, so that was great coverage for me, but it wasn’t like I was getting paid great. I was getting paid better than the average boxer in Mexico, but not compared to how boxers are paid here in the States.”

It wasn’t just money that made her want to fight in her adopted home country, though.

“As a boxer, you always want to make it to the States,” Urbina said. “That’s where it’s big, that’s where everybody wants to come to fight. From China, from Europe, from everywhere. So, I wasn’t going to belittle myself and doubt myself that I couldn’t make it here to the States. It was always a goal to make it here, and I still have that goal. You never know, I could be fighting at T-Mobile Arena, at the MGM, at Madison Square Garden. I have those dreams and I’m not just gonna turn back because not a lot of women have done it.”

And truth be told, women’s boxing can still have a bit of a Wild Wild West feel to it, especially when it comes to matchmaking and available info on opponents. Urbina found that out as soon as she made her U.S. debut and compared it to her pro debut against Eloisa Martinez in 2016.

“I got lucky that when I turned pro I did sign to Zanfer, which is one of the bigger promoters in South America, and they do a great job,” she said. “But I did notice a huge difference going from Zanfer to Golden Boy and fighting in the States. The treatment is completely different. I would show up to Mexico not even knowing who I’m fighting. Boxrec is very deceiving sometimes, especially in Mexico, where they don’t record a lot of the fights. I debuted against a girl that had 16 fights, but on Boxrec, she was 2-3-1. And I was eaten up alive by the commentators. Mexico is very passionate about boxing and if you don’t do things the way that they want you to, they’ll eat you up alive.” 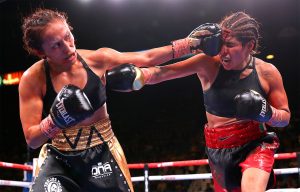 Seniesa Estrada (left) vs. Marlen Esparza. Both are promoted by Golden Boy, which is interested in signing Sulem Urbina. She’s ready to face both standouts. Photo by Tom Hogan

Those days may all be in the past now. Urbina is 12-0 with 1 NC as a pro, she can fight, she’s marketable, and at 112 pounds, there are plenty of intriguing fights for here with the likes of Seniesa Estrada, Marlen Esparza and Ava Knight. In other words, better times are coming, and Urbina wants to make sure she leaves no questions when she ultimately steps away from the sport.

“I want it bad enough, I work hard enough and it’s one thing after another, but you know what, when it’s said and done, I want to be sure that I did the best I could with whatever it is that I’m given,” she said. “I don’t want to be sitting there, wondering what if I would have done more? I want to give it all and know that I’m happy with myself. I suffer from depression, so there are some very, very tough days, but I sit there and look back at everything I’ve already done and accomplished, and all those things I’ve gone through, and there’s no way in hell I’m turning back right now. I gotta go all-in.”