Ring Exclusive: Devin Haney reacts to being reinstated by the WBC 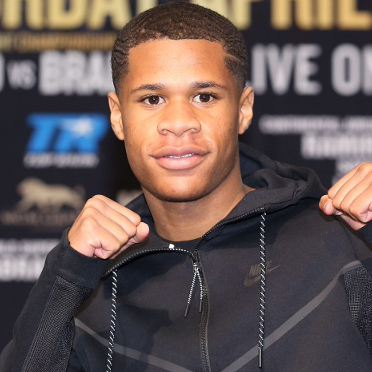 It’s been a tumultuous week for Devin Haney. One the 21-year-old star may never forget. He began the previous seven days labeled “a racist” and ended it holding aloft the WBC lightweight title belt again.

On Wednesday, Haney, The Ring’s No. 2 ranked lightweight, was reinstated by the WBC as its world lightweight titleholder. The sanctioning body outlined its ruling in a statement that said: “Pursuant to, and consistent with, the governing WBC Rules & Regulations, and after carefully considering the positions of all the boxers involved and the special circumstances which the present global health crisis has created, the WBC Board of Governors conducted a vote which resulted in the following ruling:

2.) Grant Champion Haney a voluntary defense of that Championship;

3.) Sanction the Javier Fortuna vs. Luke Campbell bout to be for the WBC Interim World Lightweight Championship and Mandatory Challenger of the division; and

That came on the back end of last Wednesday, April 15, when Haney received a torrent of critical backlash and was branded “a racist” on social media in response to a statement regarding Vasiliy Lomachenko, The Ring’s lightweight world champion. During an hour-long chat on a YouTube channel, Haney said, “I can tell you this—I will never lose to a white boy in my life.”

Since then, numerous luminaries in the boxing community, like WBC President Mauricio Sulaiman and Floyd Mayweather, have defended Haney (24-0, 15 knockouts). Haney also defended himself against the criticism.

Talking to The Ring exclusively, Haney spoke about the rollercoaster ride of dealing with the adversity.

Haney was tapped as the WBC’s lightweight champion “in recess” after tearing his right labrum during his 12-round unanimous decision victory over Alfredo Santiago last December at the Staples Center in Los Angeles in his first title defense. The WBC placed the “recess” tab on him because of the injury.

Haney received an email Wednesday morning from the WBC reinstating him as the full champion.

“It was good to see and I feel good about it,” Haney said. “I think Mauricio and the WBC made the right decision. At the end of the day, I didn’t get hurt doing anything outside of the ring that I shouldn’t have been doing. I suffered the injury during a bout, so I never thought I should have been stripped.

“But this worked out in my favor. I can’t say enough good things about Mauricio Sulaiman. I knew Mauricio since my amateur days and I always dreamed of being the WBC champ. I have it again and I can’t wait to defend it. I think getting a big fight is going to happen, because there are some tough guys out there at lightweight that want this title.”

For now, the winner of the Fortuna-Campbell fight will be Haney’s mandatory. But that doesn’t mean Haney will wait. He wants a fight in the interim while that scenario plays out.

“I can fight anyone ranked in the WBC from one to 15,” Haney said. “I want to get two more fights in before the end of the year. It has been a great week for me. I learned a lot this week, because I dealt with a lot of adversity. I spoke to Mauricio, and I spoke to Floyd. I found out there were a lot of important boxing people out there that defended me and supported me.

“I know who I am, so this whole situation didn’t stress me out, because I know I’m not a racist. It was crazy how the world tried to portray me. Floyd told me to stay strong, and deep down, my family and friends all supported me and had my back, because they know who I am. The people that don’t know me tried to assassinate my character. I know who my friends are now, and I know my enemies.”

In the end, Haney is on top.

“One day I will look back on this situation and be happy that I went through this,” Haney said. “This will be part of my legacy and my kids one day will say, ‘Damn dad, you took on all of that?’ I’ll tell them, ‘You know what, I’m happy I went through all of that. It’s what I had to go through to get to where I am today.’

In the end, Devin Haney is holding aloft a championship belt once more.