Ring Exclusive: Devin Haney got a bad rap being called a ‘racist’ 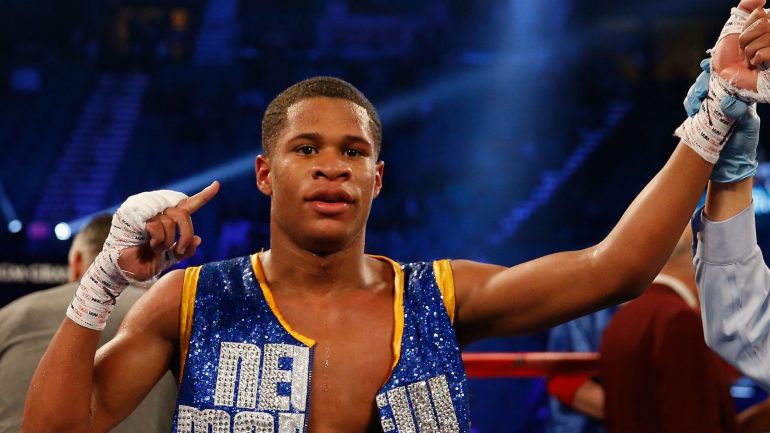 Devin Haney thought one day he would make it big in boxing—but not for anything like this.

Haney, The Ring’s No. 2 ranked lightweight, received a torrent of critical backlash and branded “a racist” on social media over the weekend in response to a statement regarding Vasiliy Lomachenko, The Ring’s lightweight world champion. During an hour-long chat April 15 on the 78SPORTSTV’s YouTube channel, Haney said, “I can tell you this – I will never lose to a white boy in my life. I don’t care what nobody got to say. Listen, can’t no white boy beat me, I don’t care, on any day of the week. I fight a white boy like 10 times, I’m gonna beat him 10 times.”

Anyone who sincerely knows Haney, anyone who’s ever been around Haney, knows the WBC’s lightweight champion in recess is not a racist or prejudiced.

What Haney (24-0, 15 knockouts) said is often repeated in boxing gyms from Philadelphia to Los Angeles and everywhere in between. Bernard Hopkins once said that he would “never let a white boy beat me” in 2008 prior to his fight against Joe Calzaghe. Anyone who knows the all-time great, anyone who’s ever been around the Hall of Famer, knows Hopkins is not racist or prejudiced.

Those that knew Hopkins laughed, because they knew he was throwing out his usual pre-fight verbal banter, and knew it wasn’t who Hopkins truly is.

The same logic should apply to Haney, a 21-year-old star who is highly intelligent and whose siblings are biracial.

Regardless of how someone is raised, or what their background is, most intelligent people learn to shed the ersatz boundaries based on race they were brought up thinking when they enter the real world. It’s why racists are cowards. It’s why they hide behind pseudonyms on social media, in chat rooms and on comment sections.

Dullards are racist. The ignorant prejudge based on racial stereotypes.

Many fans, however, make the constant mistake of assuming, based on one quick soundbite or a passing handshake that they know who these fighters are outside of the ring.

In an exclusive one-on-one with RingTV.com over the weekend, Haney was contrite in not meaning to offend anyone with his statement to the YouTube channel, and making sure his point gets across—he’s not a bigot, nor should he be labeled as one.

It simply does not make sense when the term “racist” is applied to someone like Devin Haney.

Haney went on Twitter to proclaim that he’s “not a racist” and will never be a racist.

And here with RingTV.com, the talented Las Vegas resident reiterated that message in more detail.

I always thought that one day I would be big in boxing, and reach a peak, but not for anything like this. If anyone really knows me, it is kind of funny.

“It’s crazy to see these comments,” Haney said. “When all of this came out on social media, it definitely surprised me. The other thing that makes me laugh about this whole thing is that my favorite fighter in the world right now is Canelo Alvarez. He’s Mexican. Look at my tweets a week ago, when I said one of the better fighters today is ‘The Monster’ (Naoya Inoue).

“The people around me and the people who generally know me also know that I’m not racist at all,” Haney added. “I’ve always heard about how social media twists these kinds of things. I always thought that one day I would be big in boxing, and reach a peak, but not for anything like this. If anyone really knows me, it is kind of funny.

“It was aimed at Lomachenko and (the United Kingdom’s) Luke Campbell, as individuals. I didn’t intend it to be aimed at anything racial. You’re in the gym, you’ll hear things like, ‘That’s a bad white boy; that guy can fight.’ I think people took what I said way too seriously and there is no way that I meant it in a racial way.

“Everyone sees me calling out every race of fighters. I don’t discriminate. If you’re in the opposite corner, my job is to beat you. I don’t care what race you are, black, white, Mexican. It doesn’t matter to me. I’m a student of the game and I want to fight the best. I put in the hard work and a lot of sacrifice to get to this point, and firmly believe that if anyone is a racist or prejudiced in any sport, they’re never going to make it. My promoter, Eddie Hearn, is white. The people that are very close to me are white, black, and all races.

“Racist or prejudiced people don’t have nor trust people of other races around them at all. In boxing, there is no racism. There can’t be. I’m not a racist—point blank. I want the world to know that. My track record shows it.”

It’s why WBC President Mauricio Sulaiman reached out to Haney over the weekend to show his support. Sulaiman initiated the conversation with Haney after he was made aware of the interview through several sources. Sulaiman wanted to get the facts together with Haney.

The two spoke for a while.

“Devin is a character young man, who’s been with us to many charity events, with children’s hospitals and orphanages, and he does this on his own,” Sulaiman told RingTV.com on Sunday. “Devin has shown he has a very kind heart who cares about all people. What he said you hear in the streets and he did not mean it to be racial or prejudiced at all. Boxing is a worldwide sport.

“You can’t be racist in the sport of boxing—or you will fail. No one will want to deal with you. We have a responsibility for your acts, and in this case with Devin, this was not a racist remark whatsoever. We spoke for a long time and I explained to him about his responsibility as a world champion, and I explained to him how things can get a different meaning, depending on who is watching and how things can get twisted.

“Devin assured me going forward that he’s going to be an ambassador of good will and social integration. But he’s always been those things any way. Devin did not mean to cause harm or hurt to anyone with what he said. If you know Devin Haney, that’s just not him. He’s a young, family kid who deserves to be heard. In this world, with social media and how people jump on things, this was not fair. It was not fair how he was treated, especially someone like Devin Haney.”

Bill Haney, Devin’s father, stressed that no one lasts in any kind of business today if they harbor any racial prejudice. It’s certainly not the way he raised his son.

“I know my son and he’s definitely not a racist,” Bill said. “I watch my son, I see the way he interacts. He talks and thinks highly of everyone. In boxing, we all want to work together. When you’re talking s—, those things, I call barbershop talk, gym talk, those things come out. Devin’s partner is white. Eddie Hearn is our promoter. Devin’s brothers and sisters are half white.

“Devin is a good kid. My son is not a racist and I’ll stand out and shout that down rightfully so.”

Anyone who knows Devin Haney, anyone who’s ever been around Devin Haney, knows that. Talking to numerous influential boxing people, they know it, too.

Devin Haney is not a racist. He simply got caught in a situation that was hyped far out of proportion.

“Moving forward, I’m ready to take on the best,” Devin said. “When the time comes, I’m ready to show the world. If I offended anyone with what I said, that was never my intent. It’s definitely been a learning experience for me.”