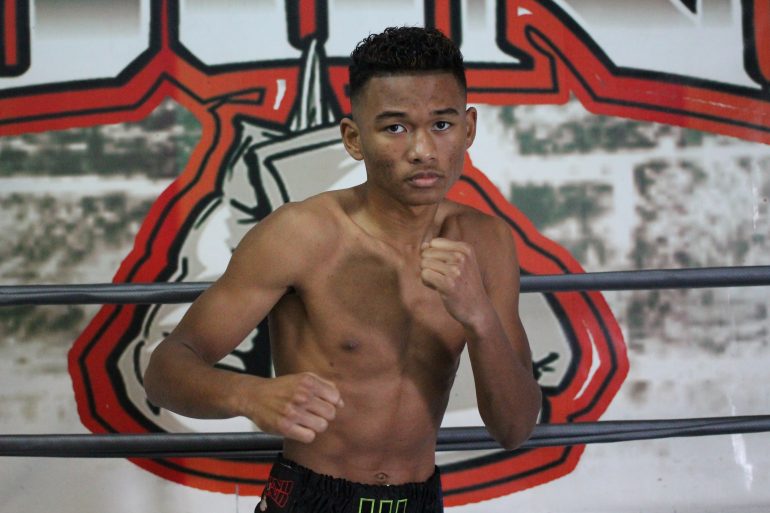 DJ Zamora was sitting there waiting for his son, Demler Zamora III, in the reception area of the Floyd Mayweather Boxing Club after a workout. At the time, Demler was only seven and learning the nuances of boxing. What caught DJ by surprise one afternoon as his son came out to greet him was who followed Demler—the late, great Roger Mayweather.

Mayweather was mystified by something. Who better to answer a gnawing question about a son than a father, right?

“Did your son ever box before?” Mayweather asked DJ.

“No, we might mess around at home throwing punches at each other,” DJ responded. “Why?”

“Demler does some things that come naturally to a fighter, like turning his hands over when he throws a punch,” Mayweather said. “Usually, kids are taught that at an early age, or it comes naturally. I have pros that don’t turn their hands over like that, and they’re grown men.”

DJ Zamora couldn’t completely fathom what he was told then, but Mayweather was impressed and asked DJ if he could bring Demler back again.

It’s the first time Demler, known as “Little DJ,” was ever in boxing gloves, which were as big as he was. That he drew the attention of someone with a trained eye like Roger Mayweather impressed Demler’s father.

That was nine years ago.

There’s even a video showing Floyd Mayweather and his uncle Roger, who died on March 17, doing pad work with Demler.

Since then, Demler, who’s a mix of Filipino and African-American descent, has forged a successful amateur career that’s blossoming into a budding pro career. Training out of the Pound4Pound Boxing Gym in Las Vegas, Demler is a 5-foot-10, southpaw featherweight with a 3-0 record and two of those victories came within the distance. Known as “DJ” or “Little DJ,” Demler is a 16-year-old junior at Odyssey High School in Las Vegas.

Boxing seems to have come naturally to the potential star—and it was spotted early.

“DJ always seemed to have this ability to never be phased by the moment,” said DJ Sr., the father of four boys and who trains his son. “When DJ was younger, I was tough on him and I pushed him to a limit when he was on the brink of crying. DJ knew that when he worked out with me, but he had that option to stop. DJ was pushed to limits he wouldn’t see against kids his own age. He knew once he walked out on to the football field, or in the boxing gym, it was time to work. Once you leave, then it’s time to have fun.

“That started at an early age. It’s why he is where he is today. But that started early. Just watching him train and work with Roger, it’s crazy because I didn’t even realize it. Roger would always say DJ is going to be a world champion one day. He always said he could see it. Roger kept saying, ‘DJ just naturally knows how to fight.’”

It’s an ability that continues to grow.

Through time, father and son have evolved as trainer and fighter. Demler has learned to step back and push as hard, willing to Little DJ learn by his own mistakes and not push enough to spoil what is an organic love of the sport.

The plan with Demler is to keep him busy and move him gradually. Demler is managed by Bob Santos, the venerable Northern California boxing handler who also has twins Chavez and Angel Barrientes out of the same Pound4Pound Boxing Gym. Little DJ has also sparred Shawn Porter twice, WBO featherweight beltholder Shakur Stevenson and most recently Tugstsogt “King Tug” Nyambayar, as the primary sparring partner in King Tug’s preparation for his February title shot against WBC featherweight titlist Gary Allen Russell Jr.

“I remember seeing the video of DJ when he was a little kid,” Santos said. “Back in September, we put DJ in with an undefeated 140-pounder who had more experience and the kid did really well against the bigger, older guy. I didn’t put the two together until Mario Serrano (the boxing publicist) brought it to my attention that the kid was the same little kid in the video with Roger and Floyd Mayweather.

“DJ was in with some of the best—and he’ll be sparring Leo Santa Cruz to get him ready for Gervonta Davis. That will tell you how tough and how good DJ is. He’s a mature kid who really wants to do something in boxing. He’s definitely confident, and that comes from being around the Floyd and Roger Mayweathers, and sparring some of the best in the world. He got a Harvard education in terms of boxing.”

Demler remembers being at the Mayweather gym.

“Looking back, it was a great experience,” Demler said. “It’s crazy when I think about it. I look back at the video of me with Roger and Floyd and the little kid doesn’t even seem like it’s me. It’s like I’m watching my little brother box. At the beginning, it took some time to realize what I was getting into with boxing. When I began training more, I started to really fall in love with boxing.

“I loved winning and getting the trophies. But I also started to really like it.”

When Demler turned 11, competing and winning major tournaments, he started believing boxing could take him places he never imagined.

One day, Demler is tempted to approach Floyd Mayweather with the video on his phone and remind the all-time great that the little kid in the video was once him.

Because he’s 16, Demler fought in Mexico in January and February, but will turn 17 on April 27, which will allow him to fight in numerous states, including Nevada and Pennsylvania.

“I would like to show Floyd where I am now,” Demler said. “Sometimes, I see me in my little brothers. I want to be a role model to them. For now, I’m looking to wait out this coronavirus situation and get more fights in before the end of the year.