Chisora says he’s ready to die in the ring, to beat Usyk–but can the promotion beat COVID-19? 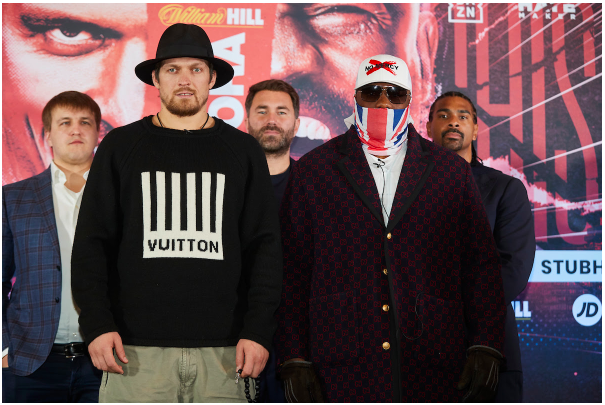 Boxing is one of those places that you get to understand, after being in it for a length of time, it can be foolhardy planning things too far in advance. Today, March 13, Eddie Hearn ran a press conference to bang the drums and tootle horns for an Oleksandr Usy vs Dereck Chisora scrap.

“We’re confident this fight is gonna go ahead with no problems at all,” said Hearn, speaking on an event that is 11 weeks away. 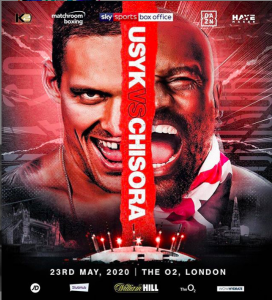 You may have heard, time is moving differently for many around the world, as the specter of the rogue virus COVID-19 messes with heads in some 115 countries. So, when Hearn starts tix sales for a fight card unfurling May 23, well, let’s just say that we can safely presume that his fingers were fiercely crossed as he talked up the rumble.

“Hopefully a safe date for us,” Hearn said, as he tossed the baton to David Haye, who reps Chisora. Haye said that Chisora is in good form and told watchers that Usyk is a great cruiserweight. He’ll need to beat Chisora to show that he can show similar form at this weight division, he declared.

The 36 year old Chisora in recent years has taken on a tweaked persona, that of an unabashed warrior. He wore a Union Jack mask, covering his mouth and nose, part hooligan style, part smart virus evader.

If, sorry, when this one gets off the runway, they touch down at O2 Arena.

“I am very happy to be back here and I really hope that this fight will take place,” said the ex cruiser champ Ukyk, age 33. “He’s a really big guy and he hits hard. I will train hard and I will be in the best shape for this fight and I tell you once again, I love boxing very much, I love to box.”

Chisora, out of Finchley, London, owns a 32-9, 23 KO mark. He is mercurial, he sometimes is off the rails verbally, gets madly hyped and talks heavy trash. Other times, he’s more measured, mellowed. This Chisora was measured, but heavy:

“I want to thank Oleksandr for taking this fight. I am fighting one of the best fighters out there! The guy knows how to box and I can’t get sparring partners who can box like him. I will chuck whatever I can chuck. I want to take his golden ticket and I want to take what he has and make it mine. I think the way he wins this fight is by knocking me out but that is not going to happen because I am going to keep coming. I’m ready to go into the other side, I’m ready to die in this fight… I am so chuffed for this fight.”

And you, readers? The numbers, as of Friday in the UK: 11-798. 798 cases of COVID-19, 11 deaths. We tend to think leaders in that region call for a ban to mass gatherings, so let’s see what Hearn does. We know Bob Arum has been making plans for empty arena/studio fights for a week. Do you think Usyk vs Chisora happens May 23?