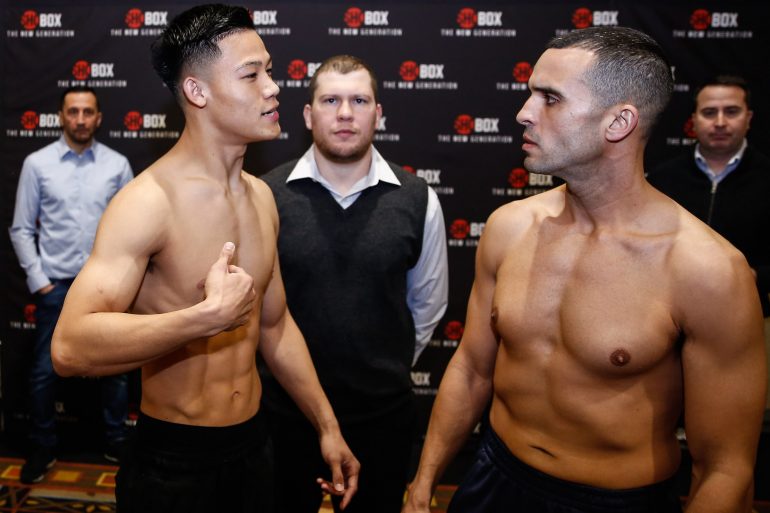 Big-punching undefeated super lightweight prospect Brandun Lee and his Camilo Prieto both made weight a day before their slated 10-round showdown Friday night at the Grand Casino in Hinckley, Minn., the home of the next episode of ShoBox: The New Generation.

“This is a huge step-up, a huge opportunity,” Lee said. “I just want the world to see me perform and the fact that I am headlining on Showtime is great for my career. I’m looking forward to more opportunities like this and fighting better and better competition each time.

The 33-year-old Prieto (15-2, 10 KOs), who is of Cuban descent and resides in Miami, Florida, tipped the scales at 141½ pounds. He has won his last seven bouts in a row and is coming into this bout with a lot of confidence.

“This is just the beginning for me,” Prieto said. “Even though I’m 33, this is my first television opportunity. There’s a lot of fighters fighting until they are 40. I believe I have five or six years (left in boxing).”

Fighting on television is a dream come true for Prieto, who wants to shock the world.

“This is a dream for me. I’ve watched Showtime boxing since I was a kid, so to have this opportunity on Friday night, it’s a dream,” he admitted. “I’m ready; I’m going to leave it all in the ring.

Despite his older age, Lee, who went 196-5 in a decorated amateur career that included a gold medal in the 2015 U.S. Junior National championships,  is not overlooking his foe.

“This is boxing. All it takes is one punch to change everything,” Lee said. “I respect every fighter I get in the ring with — anything can happen.

“He’s a natural 147, so I think he’s going to be bigger and stronger than me,” Lee conceded. “But the game plan will be the same. I just want to have fun, work the jab and wait for the right shot.”

There was concern that the card was going to be canceled altogether in wake of the COVID-19 virus. However, it was announced in the afternoon that the fight will take place without fans. The same action was taken for Top Rank’s upcoming card on Saturday at Madison Square Garden’s Hulu Theater featuring Shakur Stevenson’s first featherweight title defense against former two-time challenger Miguel Marriaga.

Generation card will move forward as planned but will not have any spectators. Brandun Lee vs. Camilo Prieto is the event’s televised main event on Showtime.