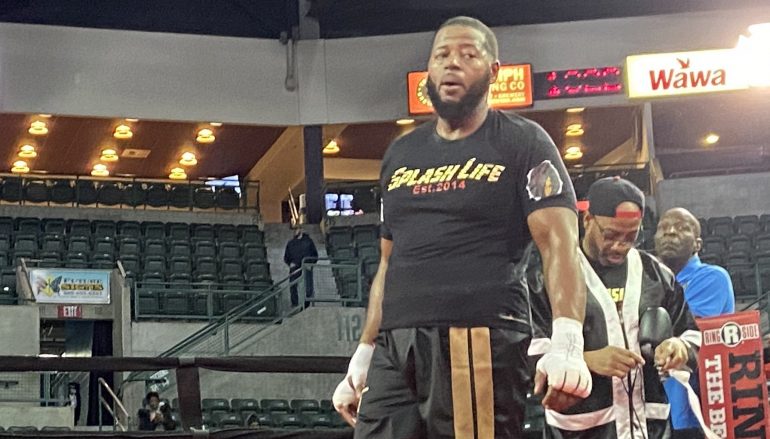 TRENTON, N.J. — Mike Hilton ended a 22-month layoff with a rust-shedding unanimous decision win over Bladimir Hernandez Saturday night at the CURE Insurance Arena in his hometown of Trenton.

“It’s my first fight in a while but we worked on being a lot sharper and a lot more composed in there. There were a few things coach [Eric Judkins] wanted me to do and I didn’t really stick to the game plan.”

The cruiserweight prospect showed his amateur pedigree early on against Hernandez (20-15, 18 KO) of Ciudad Juarez, Mexico, doubling and tripling his jab to set up his overhand right. But Hernandez, who had been stopped 11 times previously, didn’t go anywhere, and even landed effectively to the body at points in the fight.

Hilton also landed a few serious blows of his own to the ample midsection of Hernandez, but some of his punches strayed below the belt. Another instance of hitting on the break drew a scolding from referee Ricky Vera.

While it wasn’t as sharp a performance as Hilton would have wanted, he says it felt good to be back fighting again after injuries and managerial issues put him on the sidelines.

“Especially after that first punch landed, I thought, ‘I’m alive, I can breathe again,'” said Hilton. “He hit me with a couple of body shots and I was like, ‘This is what I live for. I love this shit.'”

Hilton pressed for the knockout, landing heavy flurries in close to the head and body on the fighter who had once been a welterweight.

“He was a tough dude, real crafty,” Hilton said, adding that his right hand would hurt from landing on the forehead of his opponent.

Hilton says he’d like to get back in the ring “ASAP” and expressed an interest in fighting again on the next “ChampBox” card presented by Silver Bow Promotions, which is scheduled for April 3 at the same venue. Silver Bow’s Bill Halkias, best known for managing Zab Judah in recent years, says the goal of the series is to highlight more local fighters in New Jersey.

“We have a lot of boxing talent in our area and we intend on giving every one of our local fighters opportunities on the ‘ChampBox’ series,” said Halkias.

In the co-featured bout, another local upstart made a statement with the brevity of his outing.

Shinard Bunch (7-1, 6 KOs) landed a right uppercut followed by two hooks in the first ten seconds of the bout to score the first knockdown of Fabian Lyimo (23-12-2, 15 KOs), sending the hometown crowd into a frenzy. Lyimo was essentially done as he rose to his feet, but was given the benefit of the doubt for a few more seconds before the fight was stopped a few punches later at the 35-second mark.

The welterweight boxer Bunch, 20, fought seven times in 2019 after turning pro in April, and was fighting for the second time in January. 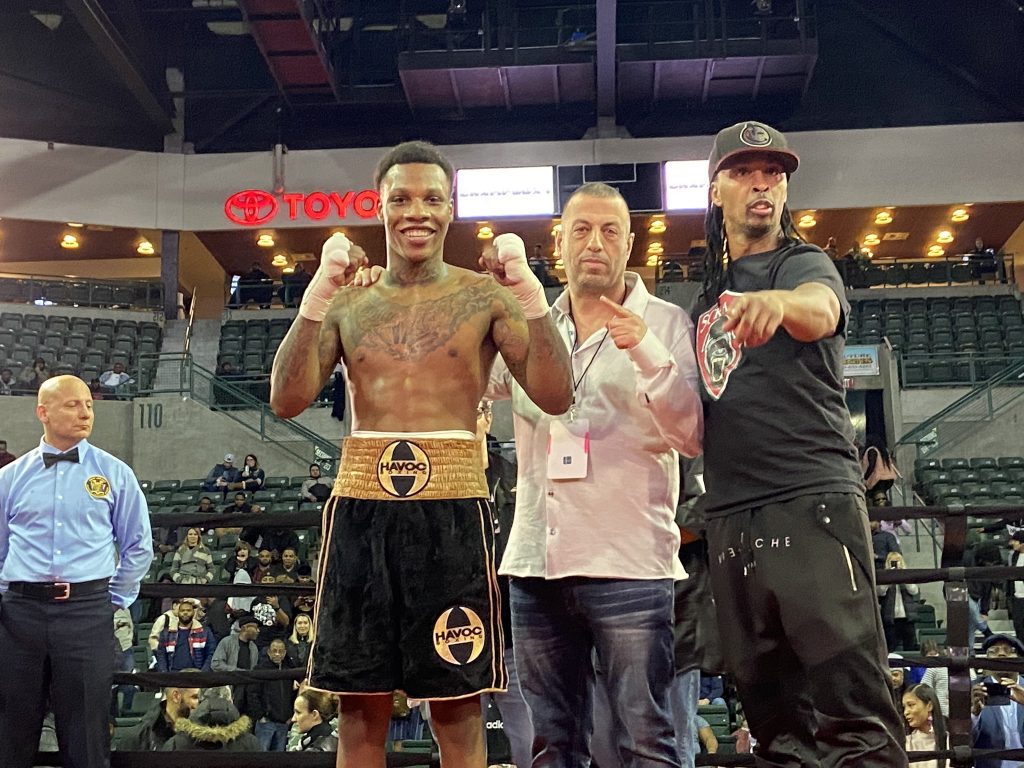 Shinard Bunch after his first round KO win in Trenton. Photo by Ryan Songalia

Light heavyweight prospect Chris Thomas (15-1-1, 10 KOs) of Toms River, N.J. had a similarly abrupt ending to his fight, swarming Engelberto Valenzuela (12-17, 3 KOs) of Agua Prieta, Mexico to score two knockdowns before the fight was stopped at the 1:13 mark.

Thomas, 21, has now won two straight since the only defeat of his career, a decision loss to Roy King last October.

The cleanest, one punch KO of the night came in round two of the light heavyweight bout between Frederic Julan (12-0, 10 KOs) and Fidel Munoz (39-22-1, 31 KOs). Julan, 31, of Brooklyn, N.Y. by way of Paris, France, landed a single counter right hook to drop Munoz, who had once challenged Humberto Soto for the WBC lightweight title in 2010, for the count at the 38-second mark.