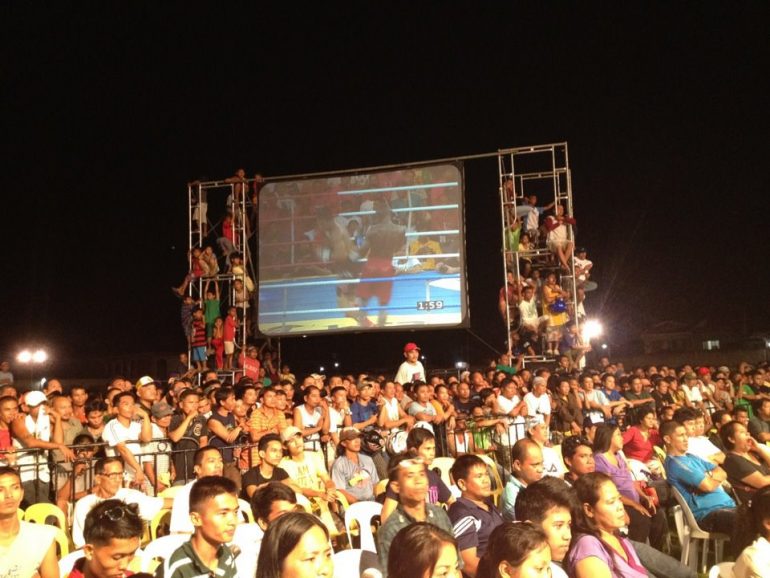 TAGBILARAN CITY, Philippines – Just twelve hours before the main event of their 12th Pinoy Pride event was set to take place, ALA Promotions heads Antonio and Michael Aldeguer were thinking of ways to make the most out of a bad situation. Genaro Garcia, the Mexican pugilist set to face their biggest ticket seller Rey “Boom Boom” Bautista at the Carlos P. Garcia Sports Complex in Tagbilaran City, Bohol, was not who he was represented to be.

Sure, his passport said Genaro Garcia, but he was not the three-time world title challenger they had hoped to match with Bautista, but a trial horse by the same name with a 10-11 record, with all 11 defeats by way of knockout. Hugo Correa, a Mexico-based matchmaker ALA had done business with in the past, had allegedly duped them into flying the wrong man halfway around the world to headline a nationally-televised card.

Emails to Correa from THE RING were not returned.

Faced with the probability that the fight would result in a farce, the Aldeguers made a drastic last minute decision; they refunded the fans their money and hosted the entire event for free.

“After we went through this the last few days and we had to go up front and tell the public what’s really real, we felt the only thing we could do to give back to the Filipino fans and Boholanos was to make this free to the public,” said Michael Aldeguer, who said that decision resulted in a “huge” financial loss. “The integrity of ALA was more important than anything. We felt that this was something that we owed to the public.”

Aldeguer had hoped to test Bautista against a competent measuring stick to see whether Bautista was ready for a step-up. Unfortunately, they would learn nothing new from this affair. 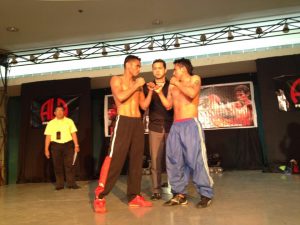 Aldeguer’s worst nightmare came true when Garcia came out for the first round and appeared to possess next to no boxing ability. A bewildered Bautista, who had once challenged then-junior featherweight titleholder Daniel Ponce de Leon unsuccessfully, did not throw punches in the opening stanza, taken aback by the awkward ineptitude of his opponent.

“I told him, ‘Let’s go Boom Boom! It’s bad if we go a long time in this fight,” said Bautista’s trainer Edito Villamor after the first round.

Bautista responded, digging body shots to the shorter Garcia, who on top of everything came in four pounds over the 128 pound limit. Almost the moment that Bautista began throwing real punches, Garcia fell to the floor to the outrage of the estimated 40,000 fans in attendance. Garcia reluctantly rose to his feet but went down once again from ambiguous punches, this time for the ten count.

“I am disappointed with my opponent because his name is Garcia, but he’s not the real Garcia I wanted,” said Bautista, now 33-2 (25 knockouts), of Candijay, Bohol, Philippines.

Michael Aldegeur said Bautista will be back in action on May 26 in Manila, possibly against the real Genaro Garcia. Their next show is scheduled for March 24 at the Waterfront Hotel in Cebu City, pitting AJ Banal (26-1-1, 19 KOs) against Raul Hidalgo (16-5, 12 KOs).

Luckily for the promoters, Raul Hidalgo is not nearly as common a name for boxers.

Servania of Bacolod City, Philippines boxed brilliantly from the opening bell, using his jab and uppercuts to penetrate the tight guard of the native of Nairobi, Kenya. Things got dicey for Servania in the third however, as a series of right crosses left him momentarily rubber-legged and looking for the bell. After a much needed break between rounds, a flush uppercut had the durable Otieno in a bit of trouble himself.

Servania is coming off a breakout 2011 when he asserted himself as one of the must-see prospects of Filipino boxing after defeating former world title challenger Gerson Guerrero and the previously unbeaten Marcos Cardenas. Otieno had lost his last two, but had done so by decision to British commonwealth bantamweight champ Jamie McDowell and unbeaten Thai Thangthong Kiattaweesuk, who is now 23-0.

Heavy-handed junior welterweight Jason Pagara (28-2, 17 KOs) showed poise and power as he scored four knockdowns of game Indonesian Frans Yarangga (10-2-1, 7 KOs) to win by technical knockout at 2:41 of the second round.

Pagara, 23, of Cagayan de Oro City, Philippines, scored a knockdown in the opening stanza on a grazing right hand. Yrangga rebounded well to fight back, but a much cleaner right cross the following round on his mouth scored the second knockdown of the fight. Yrangga was downed moments later after a 1-2 combo turned his legs to jelly. Still Yrangga bounced back up and pleaded for the ref to allow him to continue. Yrangga kept pushing forward but a check left hook ala Nonito Donaire sent Yrangga skidding to the floor again, invoking the three knockdown rule.

With the win Pagara successfully rebounded from his disheartening defeat to Rosbel Montoya in his most recent fight in September.

Also, bantamweight contender Michael Domingo (44-16-2, 23 KOs) rebounded from his loss to Drian Francisco last year, knocking out Marvin Tampus in the first round with a body shot. The 32-year-old Domingo of Sultan Kudarat, Philippines will face former bantamweight champion Joseph Agbeko (28-4, 22 KOs) in Accra, Ghana on May 26.