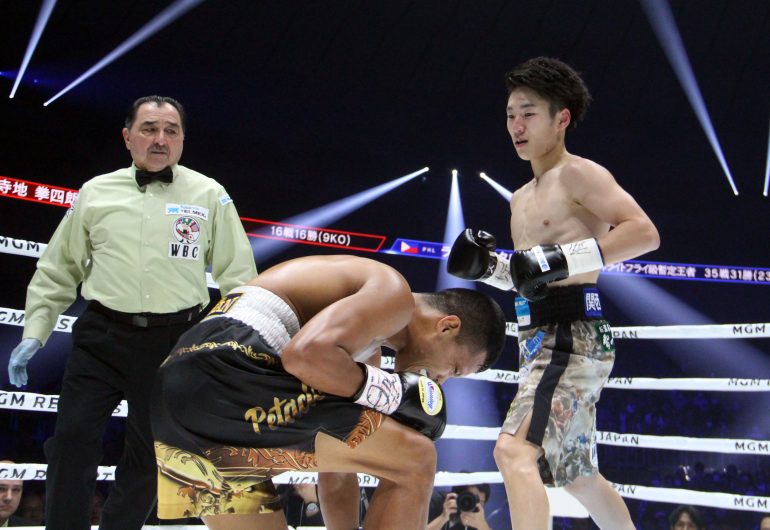 Ken Shiro retained his WBC junior flyweight title for the seventh time Saturday, dropping Filipino challenger Randy Petalcorin three times in the third before the fight was stopped in the fourth round.

Despite the early result, Petalcorin had come to fight, landing big shots with both hands from the southpaw stance. Shiro (17-0, 10 knockouts) landed heavier, however, particularly with the straight right to the body. Petalcorin was dropped three times in the final minute of the third, before the bell sounded to save him.

Petalcorin (31-4-1, 23 KOs) had fallen short in his first shot at a world title, being stopped in seven a year ago by Felix Alvarado, Shiro’s original opponent for the card in Yokohama, Japan, for the vacant IBF junior flyweight belt. Petalcorin came out swinging again in the fourth, opening himself up to big punches in the pursuit of a world title.

Once Petalcorin shot his load, Shiro went right back to the body, this time with a left hook, which dropped Petalcorin for the count, compelling Frank Garza to stop the bout at the 1:08 mark.

Shiro, 27, is the no. 1 contender in the RING ratings at 108 pounds, underneath champion Hiroto Kyoguchi. He has held his title since defeating Ganigan Lopez by majority decision in May of 2017.

Petalcorin, also 27, had won two straight heading into the fight.