Welcome to the second episode of Tourist Information: Insiders looking out and outsiders looking in from the world of boxing, a podcast hosted by noted writer Brin-Jonathan Butler. (You can listen to the first episode with Rosie Perez here.)

Brin’s second guest is Ben Anderson, an award-winning journalist, author, and filmmaker who has reported from around the world: Afghanistan, Iraq, North Korea, Brazil, Congo, Cambodia among others, covering conflicts, environmental catastrophes and pariah regimes. 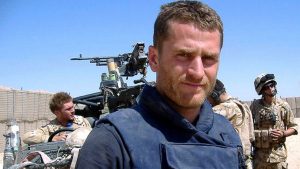 His films include Holidays in the Axis of Evil, This is What What Winning Looks Like and Battle for Marjah, which later became a book, No Worse Enemy: The Inside Story of the Chaotic Struggle for Afghanistan. His war dispatches have been published in The Guardian Magazine and GQ UK. Ben is currently a senior producer and correspondent for VICE on HBO.

Anderson is a regular face in the world of boxing, frequently attending events in his adoptive home of Brooklyn and also having worked on two boxing documentaries exploring the lives of David Haye and Danny Jacobs. In our interview we explore where Anderson’s obsession with boxing originated with Mike Tyson’s story, how the sport impacted his own youth coming of age in the UK as an amateur himself, the interrelationship between combat in the ring and in global theaters of conflict he covers as a correspondent, and the trauma and recovery of his own struggles with PTSD. Anderson offers unique insights into the character of boxers and confesses his own addiction to the truths he’s discovered from the front lines of violent human conflict.