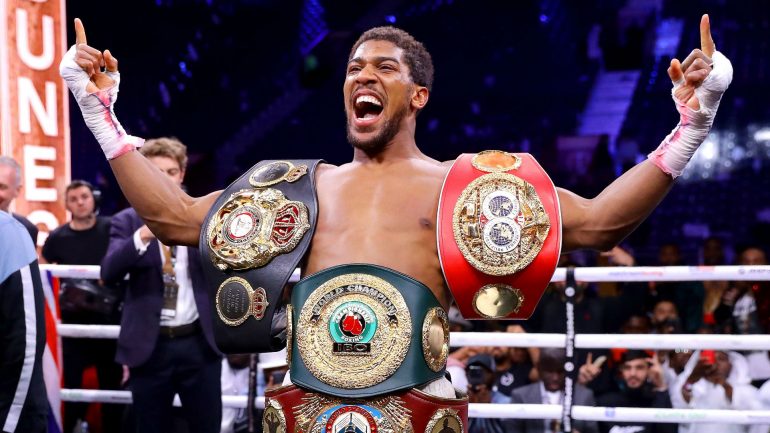 Anthony Joshua wanted to show the “sweet science” of boxing as he put together a controlled performance to outpoint Andy Ruiz Jr and become a two-time world champion.

The British heavyweight regained the WBA (Super), WBO and IBF titles that were sensationally snatched from his grasp by the same opponent earlier this year, winning their rematch by unanimous decision on Saturday.

Ruiz dropped his rival four times to force a seventh-round stoppage in New York back in June, yet never threatened to pull off a repeat result at the Diriyah Arena in Saudi Arabia.

Instead, Joshua controlled proceedings throughout, boxing behind his jab as he, for the most part, stayed safely out of range. Two of the judges at ringside scored the contest 118-110 in the challenger’s favor, with the other official’s card recording a 119-109 verdict.

In his postfight interview, Joshua revealed he fought in such a manner out of respect for Ruiz — and also aimed a shot at those who had suggested he should retire after losing his perfect professional record six months ago.

“A man like me makes no excuses, this is about boxing, I’m used to knocking guys out. I got caught last time, no excuses, I gave him the credit,” the 30-year-old told Sky Sports Box Office.

“I respect Andy and his trainer [Manny Robles] so much, I wanted to show the sweet science of this lovely sport. Stay hungry, stay humble — I’m humble in defeat and will stay humble in victory.

“It is all about preparation. One day, when I release a book, I will talk through my career. Careers are all about experience; there is no losing and no winning, it is about creating memories in this great game we all love.

“I took my ‘L’ and bounced back. Everyone can do it — life is a roller coaster. What do you want me to do? Give up? I hear certain people saying I should retire. Come on, man. Please, respect us, this is what we love to do.”

Promoter Eddie Hearn was delighted to see Joshua prove his critics wrong after the “humiliation” he suffered in his American debut.

“That is beautiful. They wrote him off — they said he was all hype,” Hearn said. “He had to come back from humiliation in Madison Square Garden. He is a two-time heavyweight champion of the world, give him the respect [because] he is a great individual.”