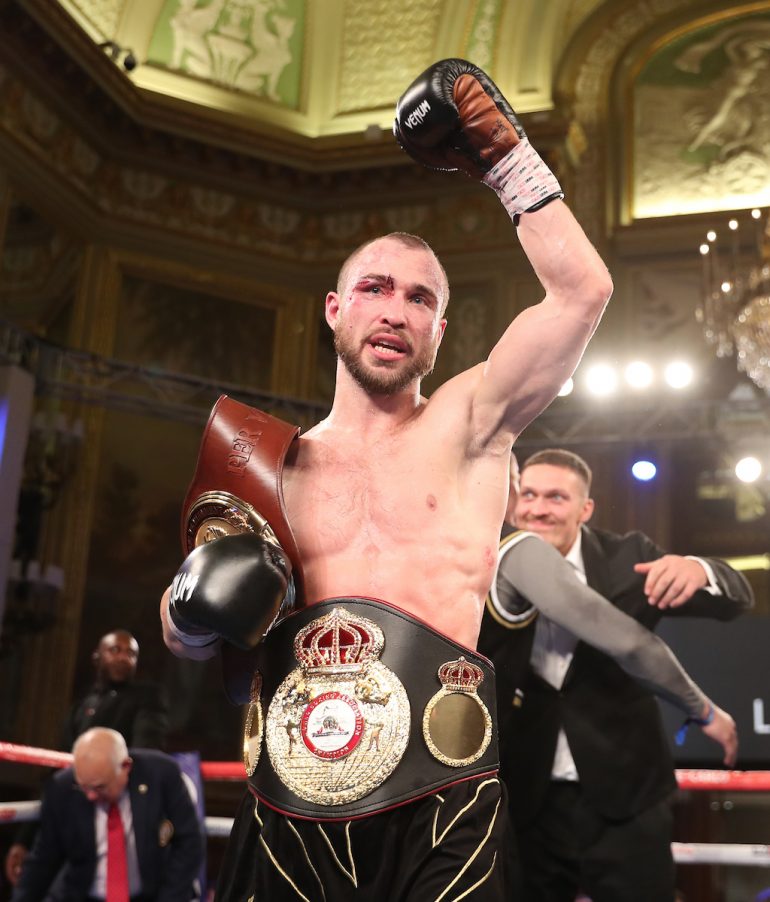 Russians Alexander Besputin and Radzhab Butaev had an amateur history together, though they never fought as amateurs. There is something when fighters come up together. They either grow very close and keep track of the other’s career, or there is an underlying animosity that can only get settled in the ring.

So, in the end, there was no surprise that they didn’t hug it out after Besputin won the vacant WBA “regular” welterweight title with a unanimous decision over Butaev on Saturday at the Casino de Monte Carlo Salle Medecin, in Monte Carlo, Monaco.

Judges Stanley Christodoulou, Pawel Kardyni and Jean Robert Laine all had it 116-112 for Besputin, while RingTV.com also had it for Besputin 115-113.

“I was very confident that I was winning the fight, and I got a little tired in the very end,” said the southpaw Besputin through translator and manager Egis Klimas. “I put in my punches very hard, but I was trying to aim my target. It was very difficult (knowing each other so well) and we have a big history going from the amateurs, but we never fought at the amateurs.

“I did everything and I’m ready for the big arena. I would like to unify the titles, and (Terence) Crawford is in my division and I’ll be cheering for Egidijus (Kavaliauskas), so we will see.”

In the fifth, Butaev began picking up the pace. Butaev began putting his punches together and connected with a pair of right hands to the body, which caused Besputin to lose his balance and fall in the fifth, which wasn’t ruled a knockdown. 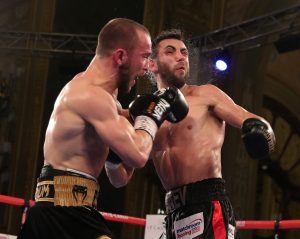 Besputin (14-0, 9 knockouts) came out strong in the sixth, as he did in the fifth, then started to ease up as the middle of the round approached. Butaev effectively went to the body with counter shots, though Besputin crowded Butaev with inside shots. Besputin (12-1, 9 KOs) landed a huge left hand, which Butaev absorbed well.

Besputin jolted Butaev with a right hook that seemed to cause a stir in the opening 10 seconds of the seventh. It wasn’t a case of Besputin beginning yet another round very strong. Butaev hardly threw a punch midway into the seventh.

With :50 left in the seventh, Besputin dropped a right on Butaev’s body. Besputin was up on his toes and moving around the ring, while Butaev appeared content on waiting for Besputin to slow down.

Entering the eighth, Besputin could have taken a slight edge.

Besputin worked a variety of angles and combinations at the outset of the eighth. And with 1:58 left in the round, Besputin plunged a right into Butaev. With 1:19 in the round, Besputin once again dropped the right to the body. Butaev appeared tentative, unsure what would come back at him if he threw a punch.

Through eight, Besputin looked as if he was taking control of the fight.

Butaev walked through everything Besputin threw, though he was taking punishment. A welt began to form under Butaev’s right eye in the ninth. Sensing he was in some trouble, Butaev had Besputin trapped against the ropes.

Besputin looked as if he had problems in the last :40 of the ninth. It wasn’t where Besputin wanted to be.

In between the ninth and 10th, Besputin was advised by his corner to stay away from Butaev and go back to boxing and moving.

A trickle of blood began running down the right side of Besputin’s face, emanating from cuts on Besputin’s right eyebrow. Besputin did close the 10th with a straight left to Butaev’s face, but was it too late to win the round?

With 1:35 left in the 11th, Besputin began tagging Butaev with combinations. There may not have been much on them, but they were landing—and scoring. Besputin was back on his toes, outboxing Butaev.

As the bell sounded to finish the 11th, a frustrated Butaev provokingly stuck his chin out to Besputin as he went to his corner.

Besputin, maybe thinking he was ahead on the scorecards, stayed away at the outset of the 12th. But he did stay busy, though at his pace. When Butaev got close, Besputin tied him up. With :40 left in the fight, Besputin slipped on the canvas. Butaev tried pinning down Besputin, whose right eye was by then a bloody pulp.

After the fight, Besputin tried talking to Butaev, who didn’t want any part of his Russian counterpart.

Some grudges never go away it seems.