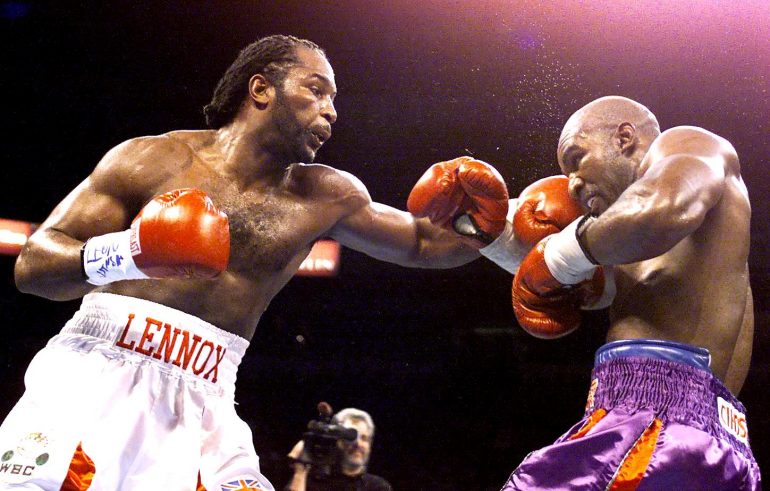 Lewis on the attack against Holyfield in the rematch. Photo by Jeff Haynes/AFP via Getty Images
13
Nov
by Tom Gray

“The new undisputed heavyweight champion of the world . . .”

No ring announcer has bellowed that phrase in a professional prize ring for 20 years. Several heavyweights have claimed world titles and even unified, but the last time an undisputed champion was crowned in the glamour division was November 13, 1999. On that night, Lennox Lewis scored a 12-round unanimous decision over Evander Holyfield at the Thomas & Mack Center in Las Vegas.

But that victory was earned in New York exactly eight months earlier.

Despite two reigns as WBC heavyweight titleholder, Lewis had struggled to secure a career-defining superfight. Former amateur rival Riddick Bowe famously dropped a belt in a trash can rather than face the hard-hitting Londoner, and Mike Tyson threw a fortune at him in step-aside money. The 6-foot-5, 245-pound Lewis was regarded as one of the best heavyweights in the world, but “one of the best” was not what he strived to be.

The moment Lewis had been waiting for finally arrived on March 13, 1999 at Madison Square Garden. In the opposite corner was Holyfield, the IBF and WBA titleholder, and this showdown was for all the marbles. A win would make Lewis the first undisputed heavyweight champion from the U.K. since Bob Fitzsimmons over 100 years earlier and greatness would be achieved. However, despite boxing brilliantly, Lewis was deprived of glory by the judges, who scored the bout a 12-round split decision draw. It remains one of the most contentious verdicts in the history of the sport.

“I was really disappointed at the time, but as the days and weeks went by, I realized that the people knew who the champion was,” recalled Lewis in an interview with The Ring. “I was okay because I was going off public opinion. I’d accomplished what I wanted to accomplish, and the world knew I was the best.

“There were people, mostly American fans, saying, ‘Oh, well, you had him hurt, you should have took him out!’ But I fought intelligently because Holyfield is known for faking being hurt, then he’ll lure you into a trap. I wasn’t taking chances or punching myself out. Holyfield had an extensive amateur career, he should have won the Olympics (at light heavyweight in 1984) and, like me, he takes the sport very seriously. I knew what I was up against.” 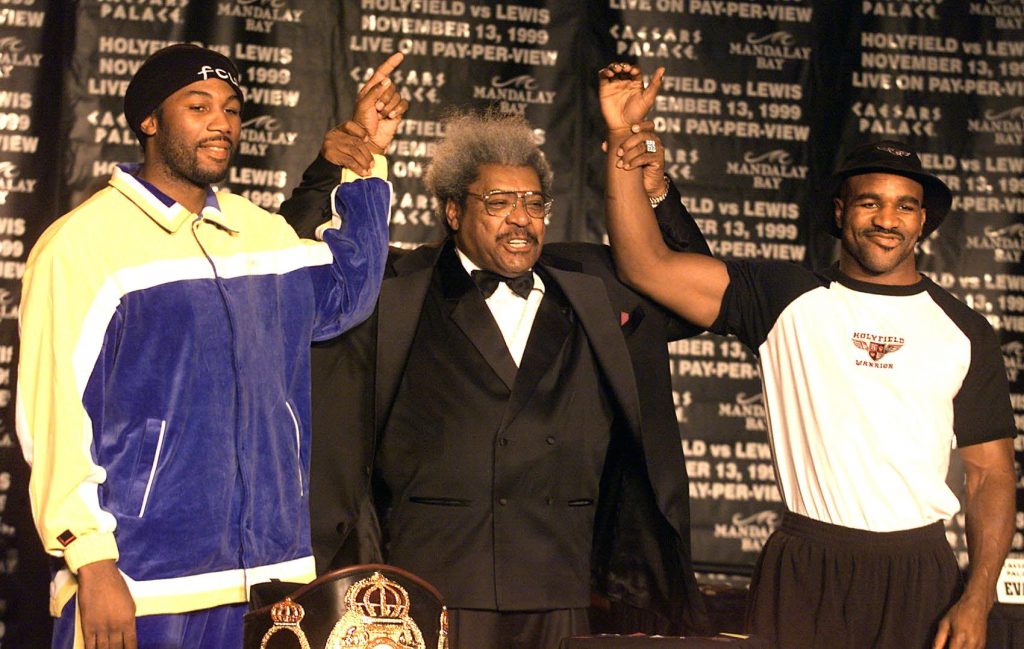 The rematch is on. Photo by JOHN GURZINSKI/AFP via Getty Images)

The rematch was a natural. Lewis was desperate for an official victory, and Holyfield was desperate to redeem himself in the eyes of those who now viewed him – unequivocally – as the second-best heavyweight in the world. Both men whipped themselves into a fantastic fighting shape, but Lewis admits that he lacked the same drive as before. “I was more focused for fight one,” he said. “Coming into the second fight, I’ve already beat him, and I know I can beat him again.

“For the first fight, he came to the ring singing and I looked at that as being disrespectful. I really wanted to give it to him in the first fight. For the rematch, he was really serious, and I knew he’d prepared better for me.”

Yes, Holyfield, even at 37 years of age, was ready to dig deep. Lewis took the lead, but “The Real Deal” had much more energy than in the New York encounter. His jab was sharp, he countered well from both sides and attacked the body whenever the opportunity presented itself. The great American warrior even managed to stun Lewis in a memorable seventh round.

“Holyfield’s performance was definitely better the second time,” acknowledged Lewis. “In the first fight, he just looked at me as a big guy, but he didn’t realize how fast I was, how strong I was and how good my stamina was. Come the second fight, he knows who I am. Holyfield tried things in the first fight that didn’t work, but he’d trained hard to make some adjustments.

“He threw some great punches and it was back and forth, but what I do remember is him using his head. I’ve never came across a boxer who used his head so well. It reminded me of being in the Catskills with Mike Tyson, who showed me footage of old-time fighters using these headbutts and elbows, but they’d get away with it. You’d have to look carefully to really see what they were doing. Against Holyfield, I was saying, ‘Now I’m in here with that type of guy. He’s using old-timer tactics and I have to be prepared for them.’”

Lewis won the majority of the late rounds to secure what was arguably his most memorable triumph. The official scores were 117-111, 116-112 and 115-113, although the former champion admits that at least one of those tallies was too wide in his favor. 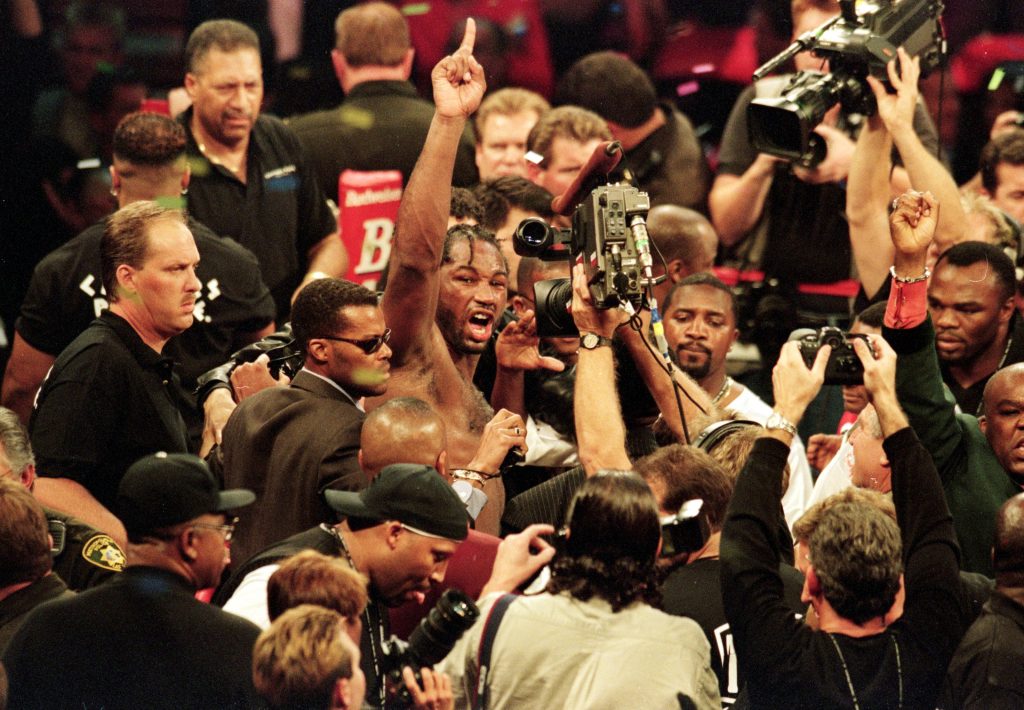 At 34 years of age, Lewis, now holder of the IBF, WBA and WBC titles, was the undisputed heavyweight champion of the world. Without going into too much detail, the WBO, regardless of what Showtime might have you believe, was not required at that time. During that era, it was not required by Kostya Tszyu at junior welterweight, Cory Spinks at welterweight, Bernard Hopkins at middleweight or Roy Jones Jr. at light heavyweight. All five men were undisputed champions in their respective divisions when they claimed IBF, WBA and WBC title belts – case closed.

Twenty years on from their great rivalry, the respect Lewis has for Holyfield remains visceral.

“Mike Tyson was supposed to be my nemesis, but during my era there were guys who brought out the best in me and Holyfield was unquestionably one of them,” said Lewis with admiration. “People don’t see your best until you’re up against someone as good. That’s when they’ll say, ‘Oh man, he can fight inside! He’s smart! He waited for him to throw all his punches, then he came back!’

“That rematch is unforgettable, and it was defining. You’re up against one of your greatest peers and you’re able to show that you’re more efficient than he is. I got all the belts. Nobody else could say that they were the champion of the world except me. I could say that I was the baddest man on the planet.”

And that is the undisputed truth.