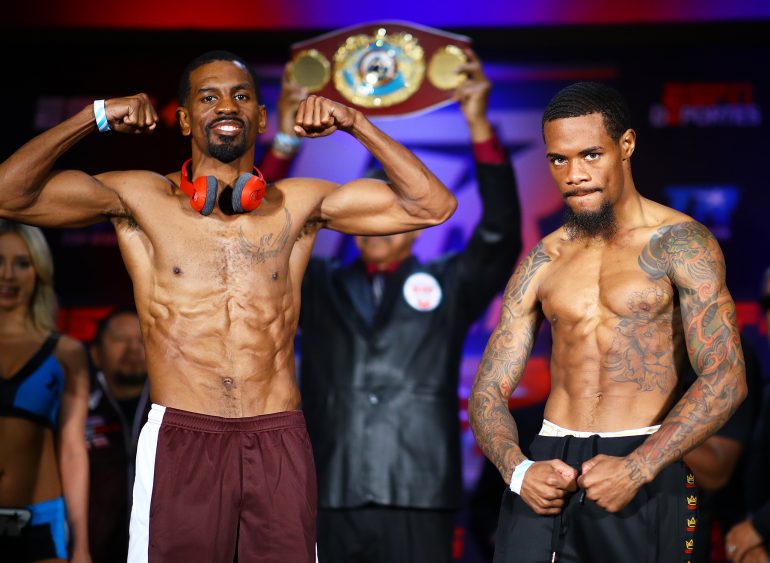 FRESNO, Calif. – Jamel Herring went all out to make himself and other Marines feel patriotic on this Veterans Day weekend before taking care of business in the ring Saturday night.

Herring outboxed and outsmarted Lamont Roach before holding off a late rally from the challenger, winning by unanimous decision. With the victory, Herring (21-2, 10 knockouts) successfully defended his WBO junior lightweight title.

Saturday was the first defense of the WBO title Herring won from Japan’s Masayuki Ito on May 25 in Kissimmee, Florida. Herring, a former Marine who served two tours of duty in Iraq, entered the fight having won his previous four fights.

Roach last fought on May 4 in Las Vegas, defeating Jonathan Oquendo of Puerto Rico by unanimous decision in a fight some at ringside thought Oquendo did enough to win.

Since the fight card fell on Veterans Day weekend, Herring entered the ring to a lot of pageantry. Herring was brought into Chukchansi Park (home of the Grizzlies, the San Francisco Giants’ Triple A affiliate) on a military Humvee behind several Marines and recruits.

The spectacle, which included fireworks, led to the fight, which was one-sided early on. The southpaw Herring worked behind a consistent jab, following them up with right hooks and left crosses to the head. Roach was not busy enough, but began to let his hands go more with more consistency as the bout progressed.

Despite throwing more punches, Herring countered effectively, walking Roach down and timing him with several left hands to the head. A left hand to the head with about a minute left in round eight momentarily stunned Roach, but he was able to quickly recover.

Herring looked like he was going to cruise to a decision victory, but was hurt at the end of the 11th round from a right cross to the head. The bell to end the round sounded to save Herring.

Roach pressed the action in round 12, but was not able to land anything flush as Herring displayed his ring savvy, holding onto Roach or keeping his distance. Both fighters embraced after the final bell sounded.

Herring admitted the punch from Roach hurt him.

“It was a good shot,” said Herring after the fight. “I thought I had my hand up. I toughed it out. I couldn’t go down in front of my Marines. I won the title on Memorial Day and I defended on Veterans Day.”

The 34-year-old Herring is hopeful he could land a fight against any of the other world titleholders at 130 pounds.

“It means a lot to still be a world champion. They say Miguel Berchelt is the best. To be the best, you have to beat the best. That includes Andrew Cancio as well,” said Herring.

Roach, who was fighting for a world title belt and in a 12-round bout for the first time, was diplomatic in defeat.

“I thought I had to get him out of there,” said Roach, who had Joel Diaz in his corner. “We knew we had to dig down. When I hurt him, I had to try to put him down. I didn’t feel I did enough. He was tall and elusive. If I picked it up earlier, I thought I would’ve gotten him out of there earlier.”

Pulev, who is originally from Bulgaria and now lives in Las Vegas, was fighting for the first time since Mar. 23, when he knocked out Bogdan Dinu in round seven. The 38-year-old Pulev made headlines immediately after the fight when he kissed a female reporter on her lips without her consent during a post-fight interview in his locker room. Pulev was indefinitely suspended by the California Athletic Commission in May, but was reinstated on July 22 after complying with provisions by the commission, including paying a $2,500 fine and completing a sexual harassment course before he could apply for a boxing license.

Booker’s previous fight occurred on June 7, when he stopped Dieuly Aristilde in round three. His other notable bout came before serving a 12-year jail sentence for a drug conviction, losing by unanimous decision to James Toney in September of 2004.

After a feeling-out opening round, Pulev was the aggressor and more-accurate puncher throughout most of the fight. Pulev mostly landed combinations to the head, throwing very little to the soft midsection of Booker.

By the middle rounds, Booker did little to fight back, at times throwing one punch at a time with little behind the punches. His right eye was swollen by then from the amount of punches he received and it looked like Pulev would end matters during the second half of the fight, but Booker took the punches well.

“It’s been eight months from my last fight,” said Pulev, who is ranked No. 10 by The Ring and is the mandatory challenger for the IBF title.. “I think my opponent was not bad. I respect him. It was a very nice fight. I controlled the whole fight, and I was the much better boxer. I showed everyone I’m at the world level, and I must fight the winner of Joshua and Ruiz.”