Out of prison, Rydell Booker wants to pick up where he left off 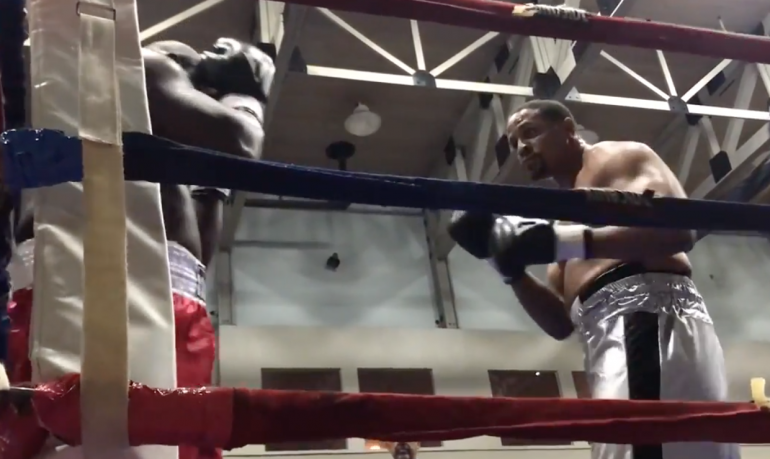 A screenshot from Rydell Booker's first fight out of prison, against Rodney Moore in February of 2018.
09
Apr
by Ryan Songalia

Saturday night marks the first time in about 15 years that most boxing fans will have seen Rydell Booker. But if you ask Booker, the boxing fans have never seen the best of him.

The date being referred to was September 23, 2004, when he faced James Toney in Temecula, California. The build-up to the FoxSports main event focused more on Toney’s unlikely rise to heavyweight contention after dismantling Evander Holyfield the year prior, and less on the impending imprisonment hanging over Booker’s head.

“It was a very difficult situation because I actually took the fight because I needed the money. I was already out on bond getting ready to go to prison, and I needed the fight to pay legal fees,” said Booker (25-1, 12 knockouts), referring to the charges that eventually sent him to prison for possession of cocaine with intent to deliver over 1000 grams.

“The boxing world didn’t give me a chance, thought James Toney was gonna knock me out in the first round because he came off of that knockout win against Holyfield but I got in there and showed that I was a very durable fighter.”

The Detroit native Booker appeared listless that night, and was knocked down in the eighth round. He heard the final bell though. While Toney went on to challenge for heavyweight belts a few times, Booker was headed to prison, sentenced to 12 to 30 years. Inside, he had plenty of time to think about how he’d get his life and career back on track if he was able to get out.

There was no sparring in prison, no trainers to offer advice, but Booker made the best of it, hitting the speed bag and heavy bag at facilities that had such equipment, doing his roadwork and calisthenics, and above all, keeping out of trouble.

“Doing everything I could possibly do, and not indulging in the other stuff that comes in on the system,” said Booker, who has had three wins against lesser opponents since his release.

Booker went in on September 9, 2005, and came out on August 9, 2017. Now 38, Booker gets his chance to face his first significant test since exiting the system when he faces Jermaine Franklin (17-0, 13 KOs) at Boardwalk Hall in Atlantic City, N.J. on the Claressa Shields-Christina Hammer “Showtime Boxing: Special Edition” card.

Franklin is 13 years younger, and fought on the same card as Booker last July in Detroit, defeating Booker’s friend Craig Lewis on points. Ask Booker for his assessment, he’ll say that Franklin isn’t anything he hasn’t seen before.

“I’ve seen him fight, he’s a young kid, I expect him to bring pressure but I’m not too concerned,” said Booker.

“I’ve been a sparring partner for all of the best fighters in and around the Detroit area since I was 14-15 years old. Tommy Hearns, Michael Moorer, Henry Akinwande, I can keep going down the list.”

He began boxing at age seven and had spent time in the old Kronk basement gym absorbing the wisdom of Emanuel Steward. He had won numerous amateur titles and had risen to become one of the country’s top boxers at heavyweight.

To the extent that confinement can benefit a fighter, it preserved his body from the nonstop grind of the fight game. After emerging from prison, Booker got the call to spar with Charles Martin and said the work they did reaffirmed his belief that he could still hang with the major players in division. Then, he went to work as a sparring partner for Anthony Joshua, doing between 25-30 rounds with the unified heavyweight titleholder before his most recent defense against Alexander Povetkin last September.

“When I was able to do what I wanted to do with [Martin] I knew that I could be on the elite level again and I might as well go ahead and show my craft and be more serious about it,” said Booker.

“Anthony Joshua, he’s a great guy, outside the ring he’s just an amazing person to be around. I can’t say nothing bad about him.”

For this camp, he’s no one’s sparring partner, and has had a few boxers come up to Detroit from Ohio to give him work. Booker has some catching up to do in his career, but given all he’s been through, he’s ready to cash in on the investment he’s put into the sport all those years ago.

“I feel like boxing owed me something, from seeing all my childhood friends, from the Dirrells from Flint to Andre Ward…I’m seeing them prospering and benefiting from the game. I knew it was my time, I was waiting,” said Booker.

“The people will see a great Rydell Booker.”