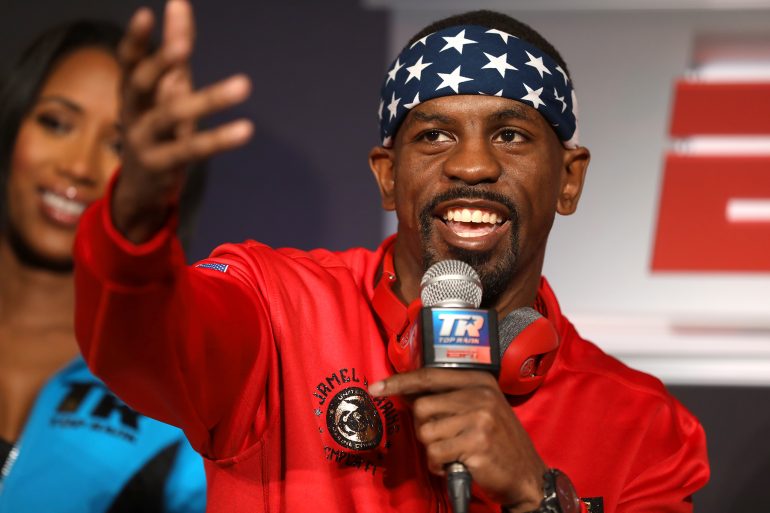 Society in general isn’t great at recognizing role models, because we attach too much importance to lauding money makers and those who seek power for power’s sake.

Also, we tend to pay attention to attention seekers who make waves. Trouble makers get ink and the good guys sometimes get short ends of sticks.

That preamble brings me to “The Fighting Marine,” Jamel Herring.

The fighting pride of Coram, Long Island, NY fights Saturday, on ESPN+ at Chukchansi Park in Fresno, Calif. The 20-2 (10 knockouts) hitter holds the WBO 130 pound crown, which he ripped from Masayuki Ito on May 25th.

This weekend, Herring, who served overseas, and has had to overcome immense tragedy, as his infant daughter perished from SIDs, meets Lamont Roach.

Roach holds a 19-0-1 record, and fights under the Golden Boy banner.

Herring, for those who don’t know, found increased success after leaving the Al Haymon/PBC fold. Yeah, this good guy didn’t get the buzz that some bad boys in that stable did. So, he told me, he latched on with Brian McIntyre, and he works out in camps with Terence Crawford…and that has paid immense dividends. No longer is he being offered fights on less than a month’s notice. And so, at 34, he’s showing a better skill set and getting better results than he ever has.

Herring said he learns from people like Bernard Hopkins, who, he picked up, doesn’t even drink juice, because of the wicked sugar content.

“They can catch the fight this Saturday, Veteran’s Day weekend, Marine Corps birthday as well…It’s gonna be a great night of boxing out here in Fresno, California,” he said.

Nov. 10 is the Corps birthday…and the daughter who passed away from SIDs will indeed be in his thoughts. Yes, he is aware of and motivated by such anniversaries. This is a person who has been open about dealing with life’s harsher moments…and we can look to him when we are drifting. His mental resolve is a large part of his success story.

Back to boxing…Herring thinks his experience will be an edge. “I feel like I’ve gotten a lot better in my last three or four fights,” he said. He has “more of the dog” in him than Roach does, he feels, and that will become apparent when he tangoes with the DC native.