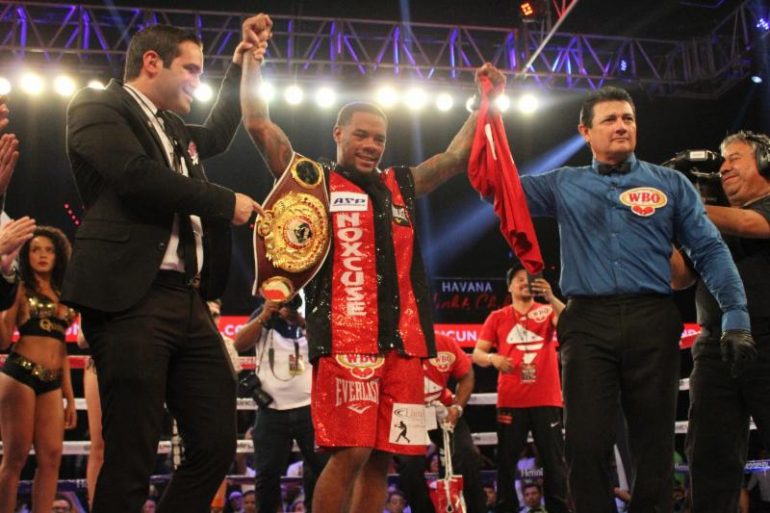 His rise has been steady, not slow. He’s 23; time is on his side and Lamont Roach can afford to get seasoned and not be forced to fight over his head, to prove a point or adhere to too-hasty of a timeline.

The Golden Boy Promotions boxer will glove up for the third time in 2018 on December 15, on the Canelo Alvarez-Rocky Fielding undercard, from Madison Square Garden. He chatted with RingTV.com about his road here, against Alberto Mercado (15-1-1, 3 knockouts).

“From my pro debut (April 2014) to now, I wouldn’t say was easy or hard,” the Maryland resident said. “It was what we’ve been preparing for forever. It’s been a lot of hard work but I think I’m exactly where I need to be right now and I want to get the door in to the world of boxing. Coming up as a prospect from D.C. everyone knew the deal with me. D.C./Maryland has some of the best fighters in the world and I’ve worked with plenty, like Mike Reed and Lamont Peterson and (DeMarcus) ‘Chop Chop’ Corley, I even sparred with (current IBF/WBA junior middleweight titleholder) Jarrett Hurd before the Frank Galarza fight (in November 2015). But he’s too good and too big now!”

A prospect’s arc can be perverted by circumstance outside the ring; boxing politricks can torture a guy and real life also takes a whack at fighters, who have regular Joe feelings and ups and downs like us civilians.

“The toughest thing on my rise as a professional was losing my cousin Bernard “Boogaloo” Roach last October. He taught me everything I know and (more than) even my dad, who’s my head trainer now. We both push even harder for (Boogaloo) because he wouldn’t want anything less. Transitioning from prospect to contender is the toughest part because that’s when the right fights really matter. Golden Boy has faith in me to become a world champion. We never turned down any name they gave us but a lot of names have turned us down.”

And yes, to reiterate, the sting of the loss of Bernard still sends pangs of pain that hit his soul.

“He was my blood cousin, my dad’s first, so my second. He had been there ever since I started at nine. He was a life saver; he was a D.C. fireman and mentor to the youth in the city,” Lamont continued. “He impacted a lot of people from his energy, an unmatched energy and natural love he had for anybody. He loved me and treated me like a son, so it was more than just boxing. Very religious and outstanding guy with morals and every chance he got to give back, that’s what he did. He took pride in keeping young dudes off the streets with boxing and he damn sure took pride in winning. He was an All-Army champ and fought in the ‘92 Olympic Trials, losing to Vernon Forrest; I believe. Honestly speaking, if he were here today, he’d definitely win ‘Trainer of the Year’ in the near future!” 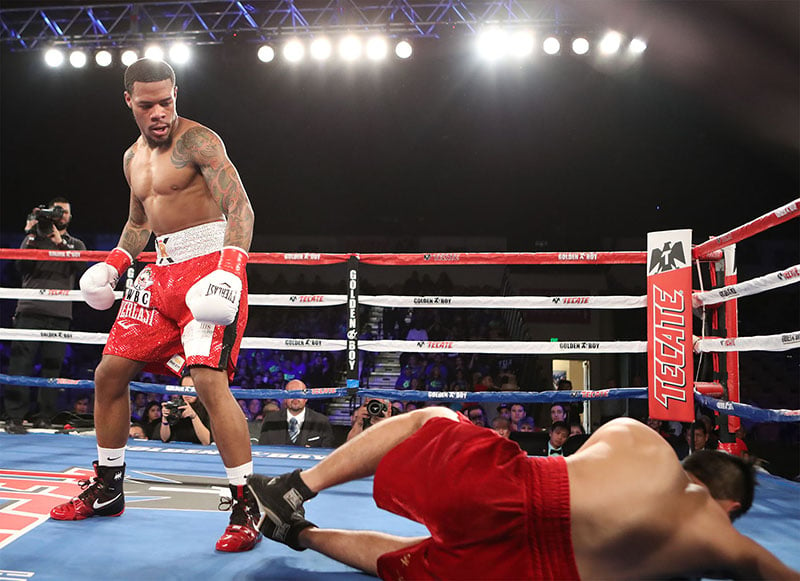 His demise came out of the blue…

“Suddenly he had a heart attack while running and no one found him in time to help. He was rushed to the hospital and was on life support for two days,” the fighter recalls. “This was in the middle of one of my camps and I fought a week later. TKO in round one against Luis Hinojosa (October 21, 2017). It really hurt!”

The lone blemish on Roach’s resume appeared in April, when he met 25-6-1 Orlando Cruz in San Juan, Puerto Rico. 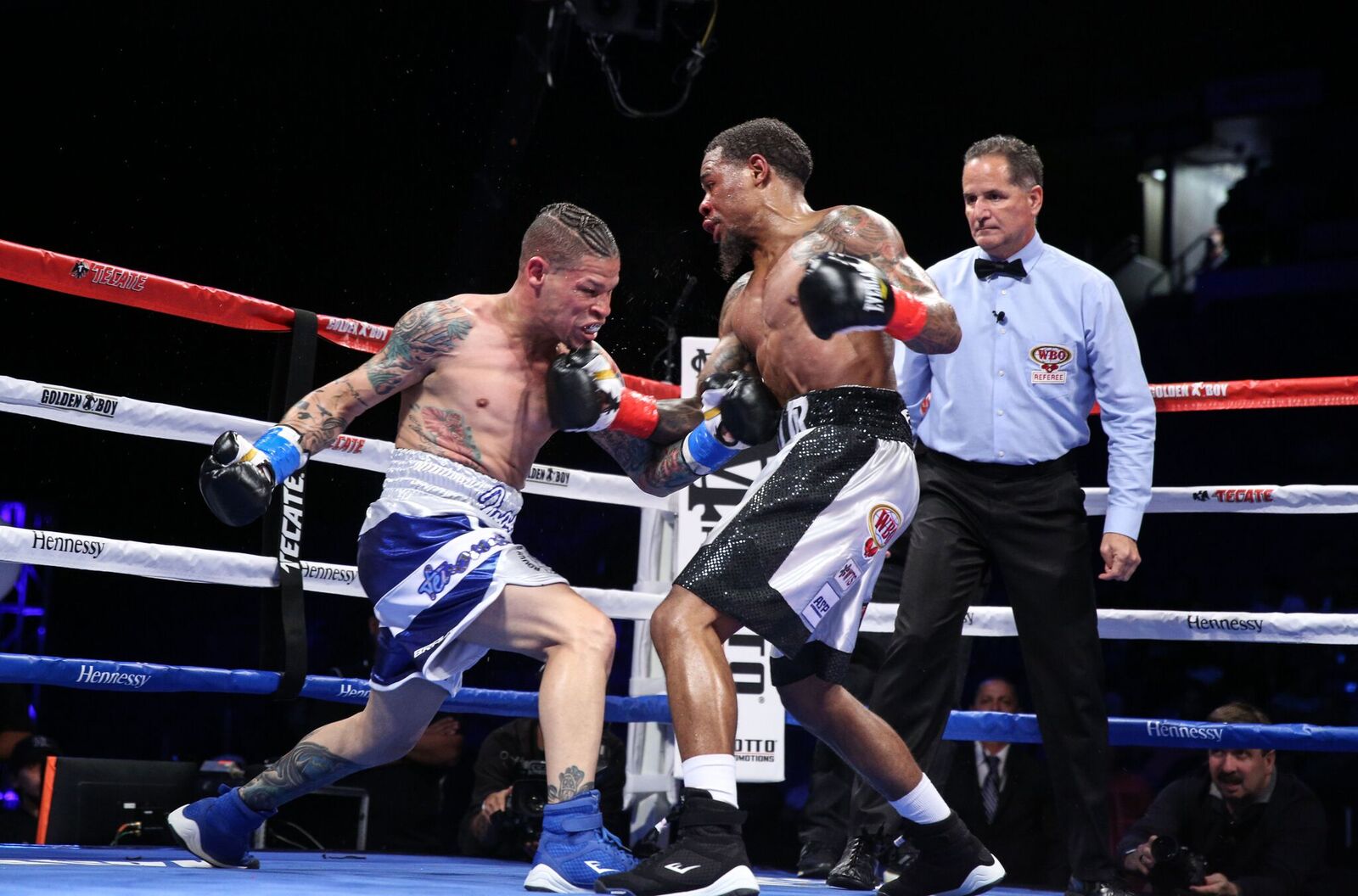 “That draw with Cruz was BS and everyone knows I beat his ass. I was down about it but I take it for what it is, learning. I bounced back and knocked out Julio Bassa (in July) for the same (130-pound regional) title because (Cruz) didn’t want to fight again. Who do I want down the line? I want to be in the ring with the likes of Alberto Machado, (WBC junior lightweight titleholder) Miguel Berchelt, (IBF beltholder) Tevin Farmer and (WBA titlist) Gervonta Davis…because that’s where I belong! It’s only a matter of time before it’s here. And maybe Yuriorkis Gamboa. He’s a former champion and it’s the level of competition I should be competing on. A win over him would be exactly what I need on my world title chase. I’m number five in the world by the WBO and none of the guys above me want to fight!”

Golden Boy’s President and matchmaker, the esteemed Eric Gomez and Robert Diaz, both offered their summations on Roach.

“Roach is a very talented young contender who has progressed very well,” Diaz said. “He won a minor WBO title and with that, earned his Top 10 ranking. He works very hard and knows exactly what he wants. He had a great 2018 and gained some valuable experience fighting on the road, first in Puerto Rico, where the title escaped him due to a controversial draw but, in his next bout, fighting for the same belt in Mexico, he would not leave it in the hands of the judges. I think 2019 will be his biggest yet and can see him challenging for a major world title. However first is December 15th versus Alberto Mercado, who will try to derail his dream. I see a good competitive fight in the early rounds but I see Lamont Roach Jr. breaking down his opponent that will earn him a unanimous decision. Keep an eye on this future world champion!”