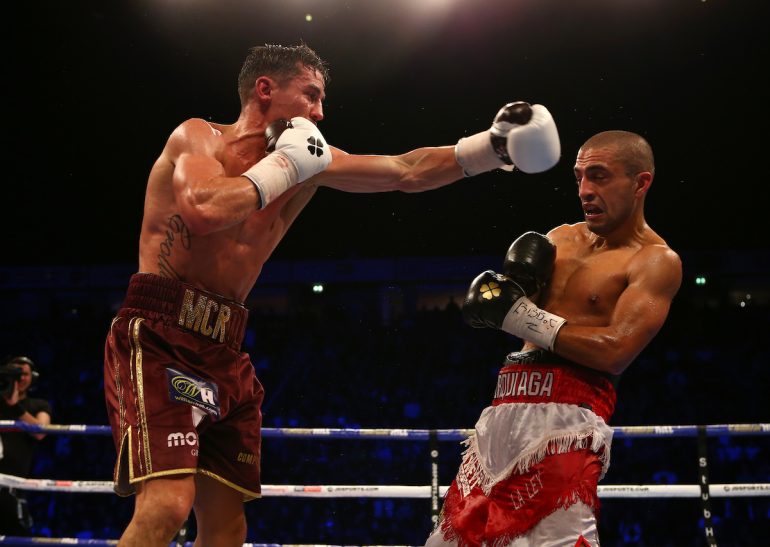 Former WBA lightweight titleholder Anthony Crolla claimed the 35th and – if we take him at his word – final victory of his career by posting a lethargic 10-round majority decision over Frank Urquiaga at the Manchester Arena in Manchester, England on Saturday. The official scores were 98-92, 97-93 and 95-95.

Crolla, who is rated No. 8 by The Ring at 135 pounds, was coming off a fourth-round knockout loss to pound-for-pound king Vasiliy Lomachenko in April. The Manchester native was desperate to end his career on a victory, but this was a listless showing given his usually high standards and the result could have gone against him.

“I definitely thought I’d done enough, but I know time is up now,” said Crolla in his post-fight interview with Sky Sports. “I done the best I could. I enjoyed the ring walk, I enjoyed the fight, but that’s it now – I’m past it. I don’t want to hang around and be a steppingstone for fighters coming through. It’s great to go out with a win, and there’s nowhere else I’d rather be than Manchester.”

Urquiaga had an excellent opening round, cutting the Englishman around the left eye and making a really target of the body. Crolla’s timing was way off, but there were also some dramatic reactions from Urquiaga whenever the action got rough. After being bundled to the canvas in the second, the Spaniard reacted like he’d literally fallen off a roof.

However, despite the theatrics, Urquiaga was doing all the scoring. For a fighter of Crolla’s capabilities, his performance was way below par, and he was being caught to the head repeatedly with combinations. As the rounds progressed, one couldn’t help but feel that this was a further indictment against retirement fights.

Crolla didn’t turn up until the fifth round and when he did the gap in talent was clear. The Manchester man just wasn’t as consistent as he was in his heyday. Also, a large part of his success was down to the fact that Urquiaga had stopped working as hard.

It was a fight of two halves and the home fighter will be thankful that he was able to edge matters.

The 32-year-old Crolla retires with a record of 35-7-3 (13 knockouts). One of the most popular fighters to ever come out of Manchester, he’ll be best remembered for a stunning fifth-round body shot knockout of Darleys Perez to lift the world title in November 2015. However, his best performance was arguably a seventh-round knockout of Argentinian dangerman Ismael Barroso in his maiden defense in May 2016.

It may not have been vintage Crolla tonight, but this was a career to be celebrated. The Manchester star has been a brilliant ambassador for the sport.