Sergey Kovalev: ‘Taking me on is risky business for Canelo’ 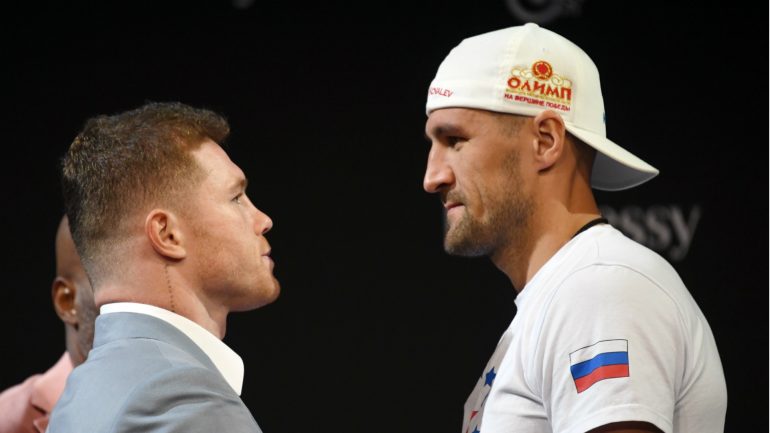 WBO light heavyweight champion Kovalev puts his belt on the line at the MGM Grand when he takes on Mexican superstar Canelo, who has beefed up to move up from the middleweight ranks.

The audacious move puts 29-year-old Canelo (52-1-2) in line to become a four-weight world champion, having also fought successfully at welterweight and junior middleweight.

But there is always an element of calculated risk when stepping into a new division, and given Kovalev has a height and reach advantage over Canelo, the man from Guadalajara is playing a high-stakes game.

Rated the third-best pound-for-pound fighter on the planet by The Ring, and No. 1 by BoxRec, Canelo heads into the contest as favorite and the 5-foot-9 counter-puncher has taken down many tall men during an illustrious career.

Kovalev said, though: “This is a big risk for Canelo because, right now, it’s his first fight at light heavyweight, but I can’t make any predictions.

“Everything depends on how I’m going to fill my day on Saturday and my body right now is hungry – I need more and more rest and to eat more.

“This is the biggest fight of my boxing career. I think my experience will help me get victory over Canelo this Saturday.”

Speaking with Omnisport, Kovalev said he cannot begin to plan out his future beyond this weekend.

After going unbeaten for the first 31 fights of his professional career, the 36-year-old Russian has lost three of his past seven and was pushed hard by Britain’s Anthony Yarde last time out in Chelyabinsk.

It has the feel of a pivotal bout, and Kovalev (34-3-1) underlined that by admitting his future ambitions in boxing will hinge on how he fares.

“Everything depends on what happens this Saturday,” he said. “If I will win, it’s going to be more opportunities for my future. If I lose, there will be less opportunities. It’s two things: right and left.”

Canelo attaches a similar significance to the showdown, having described it as “the most difficult fight of my professional career.”

Why @KrusherKovalev ? Because he’s the best in his division, he’s one of the best, that’s why we chose him, to make history by fighting one of the best.” –@Canelo #CaneloKovalev pic.twitter.com/SeNPMxWRwi

What Kovalev has in his favor is a blossoming partnership with American trainer Buddy McGirt, a former junior welterweight and welterweight champion and a Hall of Famer who has worked previously with the likes of Hasim Rahman, Arturo Gatti and Paulie Malignaggi.

Since they began working together toward the end of 2018, Kovalev has avenged an earlier defeat to Eleider Alvarez and seen off Yarde.

“We have a very good relationship with McGirt. He is a very professional coach and I like to work with him,” Kovalev said. “He gives me the right advice for my technique. My experience and his experience together is a very good cocktail.”