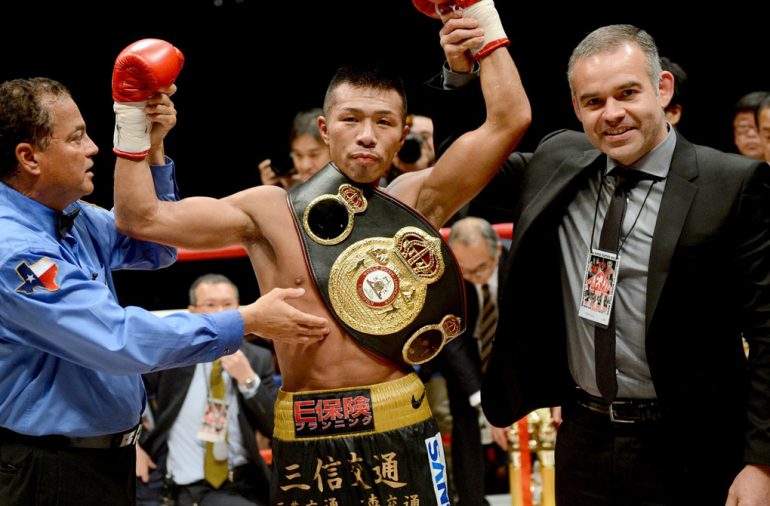 Big-punching Takashi Uchiyama held the WBA junior lightweight title for over six years and made 11 successful defenses during the 2010s.

Born in Kasukabe – a Saitama Prefecture in Japan – on November 10, 1979, Uchiyama played baseball in elementary school and found a passion for soccer when he was in junior high.

His interest in boxing began when he was 14 years old and he had the chance to watch popular national hero and former WBC bantamweight titleholder Joichiro Tatsuyoshi on TV.

“Everything about him was new and exciting to me,” Uchiyama told The Ring through Hank Kakoda at his KOD LAB Fitness gym in Tokyo. “He made me like boxing more than football.

The young fighter went on to enjoy a successful amateur career, winning four national titles and fighting at the 2003 World Championships. Uchiyama went (91-22, 59 knockouts) in the unpaid ranks. His intentions were to represent Japan at the 2004 Athens Olympics, but he didn’t qualify and initially rejected the idea of turning professional.

“In the professional boxing world, you get beaten up with thinner gloves and no headgear, covered with blood,” Uchiyama said.” I thought that I could not stand it in such a tough world.

“I got offers from Watanabe Gym again and again. They had a trainer who used to be a former Korean Olympic boxer, Mr. Hong. He has a deep knowledge of boxing; his teaching method was exactly what I wanted. Gradually, I was motivated to become a professional boxer.”

He gained further seasoning with five defenses of his regional strap before being given the opportunity to fight Mexico’s Juan Carlos Salgado for the WBA belt in January 2010.

Uchiyama was always a step ahead of the defending titleholder, who had won the belt by surprisingly stopping Jorge Linares in one round.  Salgado was floored in the final round and stopped.

“I dared to finish him in the final round, while I could have just run to win,” Uchiyama said. “I thought my KO victory would make a difference in value of my career, as well as give a strong impact to the audience.”

From there Uchiyama’s reign of terror began and just one of his 11 defenses went the distance. Only Brian Mitchell made more 130-pound title defenses and only Flash Elorde reigned for longer than the Japanese star. 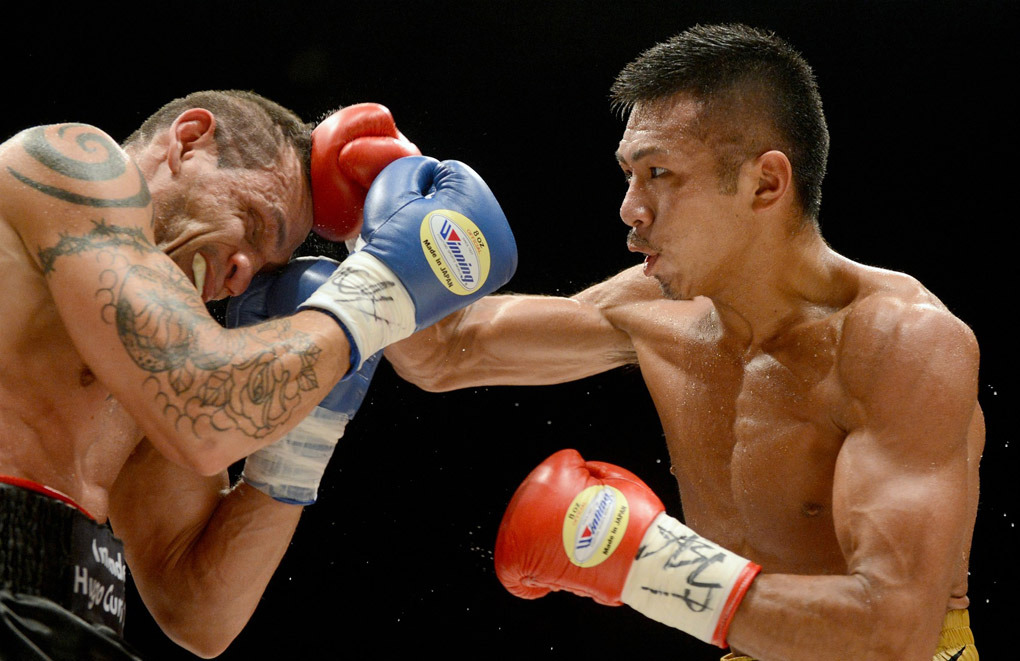 Uchiyama and Corrales met in a rematch several months later. The fight was more tactical, but Corrales won again, this time by split decision.

“My negative image of the first bout clearly remained in my head,” Uchiyama said. “I probably paid too much attention to his big counter-punch. I felt that he was ready to throw it anytime, which made me hesitate to step in sharply.”

After suffering a second consecutive defeat, Uchiyama retired with a record of 24-2-1 (20 KOs).

His status as the premier junior lightweight in Japan clearly meant a lot to him.

“The division is very competitive, even in Japan,” he explained. “Japanese champions tend to avoid Japanese challengers, but I dared to give them an opportunity. I won clearly against Miura and Kaneko.

“Frankly, I hated being compared to any other Japanese boxers in my division. What I am most proud of is that I proved myself to be the strongest junior lightweight boxer in Japan.”

Uchiyama would most have liked to have faced then-WBO junior lightweight titleholder Mikey Garcia.

“In 2013, Bob Arum approached me through a mutual friend,” he explained. “In response to his kind invitation, I visited Bob Arum’s house in Beverly Hills and told him my strong will to fight Garcia.

“Then, Mr. Arum said, ‘OK’, and he even told me his detailed plans, including when and where. However, when I returned to Japan, I faced various obstacles that needed to be overcome to make it happen. Unfortunately no further discussion was made with Mr. Arum.

“If I fought him, it would have ended in a knockout either way. I really wanted to face him to decide which of us was stronger.” 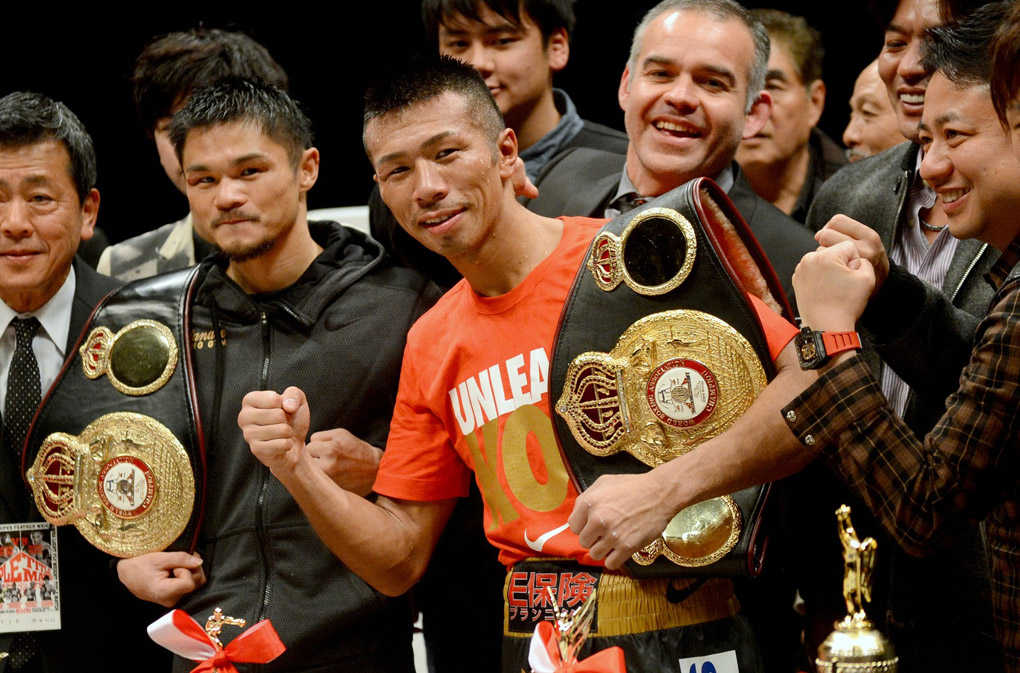 Uchiyama, now 39, is single and lives in Tokyo, where he opened his own state of the art gym, KOD LAB Fitness Boxing last December. Various top professionals like Ryota Murata, Masayuki Ito and Kazuto Ioka occasionally train there.

The ex-titleholder stays in shape and is close to his fighting weight. He regularly holds the pads at his gym for clients, ranging from children at elementary school, right up to senior citizens in their 70s. In 2011, he released his autobiography “Kokoro Wa Orenai” (My heart never breaks off).

He graciously took time to speak to The Ring about the best he fought in 10 key categories:

BEST JAB
Jomthong Chuwatana: None of my opponents could hit me with a lot of jabs. However, there is no doubt that Jomthong threw the best jab of all. Juan Carlos Salgado was also a good jabber. Jaider Parra’s jab was lighter, but effective with a unique rhythm.

BEST DEFENSE
Bryan Vazquez: His defensive skills were very good. It took me more time to hit him than I had expected. I needed to make a lot of technical effort to land my punch on him.

BEST HANDSPEED
Jezreel Corrales: His hand speed was very fast. Although speed is his valuable asset, he sometimes relies too much on it. (Corrales) easily let his opponent land a counterpunch at a time when he steps into a dangerous area.

BEST FOOTWORK
Corrales: His footwork was also excellent. He has very high physical abilities, such as the speed of stepping in and out, and the body reactions.

STRONGEST
Daiki Kaneko: He was physically the strongest, he never quit attacking me no matter how hard I punched him. Even when I thought that my punch hurt him, he quickly hit me back. He was really determined to win with his amazing toughness.

SMARTEST
Jorge Solis: I kept throwing punches to beat him, but I was unable to finish him easily due to his precise positioning. He knew how to create necessary distance to get out of any risk. He was a boxer with world-class experience.

BEST CHIN
Vazquez: His chin was great enough to endure many of my best punches. He had a strong body, as well as a stronger punch than I had expected.

BEST PUNCHER
Takashi Miura: His punching power was just like a bomb.

BEST BOXING SKILLS
Corrales: I am sure that Corrales’ boxing skills are at the highest level of all my opponents. Through two intense fights with him, I realized that he was tactically very good, in addition to his hand speed and footwork. He switched frequently and effectively. I am usually very good at fighting switchers because when a boxer switches, his speed drops accordingly. However, Corrales successfully maintained his speed even when he switched.

BEST OVERALL
Chuwatana: This is a tough question for me. I would say Jomthong Chuwatana is the best. Before the bout against him, my elbow was bad enough to require a surgery, and sometimes I could not even bend and stretch my arm due to the pain. As I could not guard and block the punch with my arm, I could hardly spar to prepare for the match. I seriously thought that I might lose to him. Also, I hurt my back during my physical training, and I could not walk for about 10 days. To hide my condition, I did not show any of my training to the media. I had a surgery shortly after the bout as my elbow bone was broken into pieces and entered my joints. When I fought him, my instinct immediately told me, “This guy is really dangerous.” I felt an extraordinary atmosphere from him as a fighter. My mission was to finish him as early as possible. When the match started, I quickly realized that my one-two punch was frustrating the legendary Thai kickboxer. Jomthong’s jab, distance and measuring ability amazed me. Fortunately, I was able to knock him out in Round 2, but it was only thanks to the fact that his style suited mine.

Our correspondent Hank Hakoda helped co-ordinate and translated this feature. The Ring appreciates his assistance.